Guest Review - - A Prior Engagement 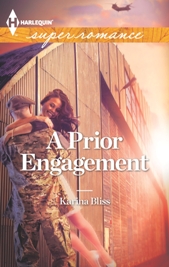 For nineteen months Juliet Browne has mourned the death of the man she loved. Lee Davis was killed in action in Afghanistan. His New Zealand Special Forces buddies found the engagement ring Lee bought for Juliet in his effects and brought it home for Juliet to wear. The months that they have shared their grief over Lee have made Juliet a part of the tribe. Claire Langford, widow of one team member and recent fiancée of another, has become Juliet’s best friend. Because Lee’s friends want Juliet to be happy and move on with her life, they set her up with a new guy. Just when she does move on with this new man, Jules gets a series of increasingly agitated texts and calls from Lee’s friends. Nate Wyatt, Claire’s fiancé, instructs her to go home so he and Clare can meet her and deliver some good news. Juliet faints when she hears their news: Lee Davis is alive.

Lee may be suffering from retrograde amnesia and be fuzzy about the circumstances surrounding the explosion that killed his friend Steve Langford and led to the belief that Lee was dead, but not even nineteen months as a prisoner of the Taliban is enough to wipe out the memory of Juliet’s rejecting his proposal and the $10,000 ring he’d bought because his Jules deserved the best. The more Lee learns about the place Juliet now holds within his circle of family and friends, the greater his anger and resentment becomes. He decides to play along with the deception so that he can personally see that Juliet pays the price for her deceit.

Juliet wants to tell Lee the truth, and she’s already making plans to pay him back the money she inherited from his estate. But she’s been warned to be careful with him, and since he seems to have forgotten their parting and remembers only the night of love that preceded it, she’s uncertain about whether he is ready to hear the truth. She loves Lee more than ever, but she is still persuaded that they are all wrong for one another.

With Lee determined to make Jules suffer and Jules guiltily delaying telling him the truth she believes he has forgotten until she thinks he is strong enough to hear it, the stage is set for tension and simmering conflict. But neither Jules nor Lee has taken into account the attraction that is, as Jules thinks of it, “always there—a trail of gunpowder waiting for a spark.” Neither of them is ready to admit that the love they share is greater than the obstacles that must overcome.

I read What the Librarian Did three years ago on the recommendation of several friends. It turned out to be one of my top reads of 2010, and I added Karina Bliss to my list of autobuy authors and glommed her backlist. I have enjoyed all of Bliss’s Special Forces books, but A Prior Engagement is exceptional even in this strong series. Bliss does in this book what she does best: she takes a well-worn romance convention and makes it her own with characters who are messy and complicated, who make mistakes, who allow their emotions to overrule their reason, and who are made vulnerable by love. They are so real you feel as if you could share a cup of coffee with them and so engaging you can’t forget them.

In Here Comes the Groom (January 2011), Bliss uses a friends-to-lovers plot and pushes it to the limit to give Dan Jansen and Jocelyn Swann their HEA. In Stand-in Wife (August 2011), she takes the overused twin switch and gives it a fresh twist, uniting Dan’s free-spirited sister Vivienne and Ross Coltrane, the coolest, most controlled of the SF team. There’s nothing new about a widow’s second time to fall in love or a hero with survivor’s guilt, but Bliss gives new dimensions to both in Bring Him Home (June 2012), the story of Claire Langford and Nathan Wyatt.

The Lazarus soldier is not new in romance either, but there is nothing trite in A Prior Engagement. Bliss shows us the process and the pain of Lee’s resurrection. The reader sees the scars left by the manacles Lee’s captors used to chain him. She winces at the missing digit on one finger and the uneven nails growing back, sickened by the suffering to which they testify. Each detail--from Lee’s embracing the rain on his trip home to the obsessive shopping trip with the ill-fitting clothes that remind him of how he has changed--reveals the price this soldier paid. Sympathy for Jules is strong too as she struggles with her guilt and with doing what’s best for Lee, all while trying to protect her own heart. My heart cracked a bit at her reaction when she first sees Lee after his return:

A minute ago if she’d been asked to describe him in one word she would have used dazzling. His smile, his looks, his charming personality. He reminded her of summer. Except there was nothing of summer about him now. If she’d seen him on the street she wouldn’t have recognized him.

Some fans of contemporary romance avoid category romances. Trust me, some of the best writing in the subgenre is being written by Superromance authors, and Karina Bliss is among the most gifted. I highly recommend the Special Forces series, but if you only read one of the quartet, make it A Prior Engagement.

And next year Bliss will give us a book that features as hero rock star Zander Freedman from What the Librarian Did (and with small parts in Bring Him Home and A Prior Engagement). Talk about redeeming the irredeemable! How cool is that?