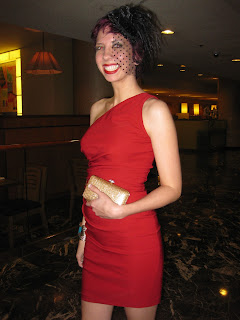 One of the best parts of attending the RWA National Conference is the opportunity to meet new people.  At the 2011 conference in New York City, one of the nicest people I had the pleasure of meeting was a new Avon author by the name of Karina Cooper.  Quirky, smart, funny and friendly, she's the kind of person for whom you want good things to happen.  She also rocks a sexy dress and heels like nobody's business.

Writing paranormal romance and steampunk urban fantasy, Karina's books have captured the interest of readers and brought her awards such as the RT Reviewer's Choice Award for Best Steampunk Novel of 2012.  Her most recent book, ONE FOR THE WICKED (April 30, 2013) is the much anticipated conclusion of her Dark Mission series and is garnering excellent reviews.

Please give Karina a warm welcome as she blogs about working through the end.

Working Through the End

When you write a series long enough—when you write enough books, meet enough characters, spend enough time working them through all the trials and tribulations a good story brings out—you begin to feel like you know these people. They become ghostly friends, cropping up in your thoughts as you live your daily life.

I find myself eating something new and thinking, “I like it, but I bet Silas Smith would totally hate this.” I’ll watch a movie, and think, “That’s something Naomi West would do.” I find a problem and wonder how Juliet might handle it, or Simon might plow through it.

With the wrap-up of my Dark Mission series, I wasn’t sure how I was going to be able to let go of characters I’d turned into friends over the past couple years.

For a while before I started One for the Wicked, I didn’t know how I was going to pull it all together. The 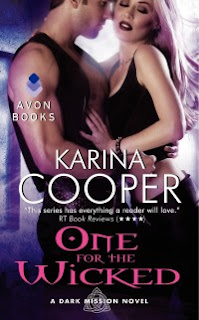 balance comes in introducing the new main characters of the book, while still brining the stories of all the other characters to a final close. I really sweated it for a long time.

Now that it’s done, I think I might have been a little more worried than I should have.

Turns out, most of what the characters are doing—how they’re doing after their own books, what they’re feeling, how they are—is already laid out for me. The hard part wasn’t in writing what they’re up to, it was in simply following the guidelines they already set in previous books. I knew, right there on the page, how Jessie and Silas were, how Naomi and Phin had learned to cope with each other’s predicaments, and what kind of hell Simon was going through—and tried to hide from Parker.

One for the Wicked ended up being so much more than just Shawn and Kayleigh’s book. As twisted and complicated as their own story is, it’s also all about the resolution of the characters we came to know and, love or hate, felt strongly about in previous books. Balancing it all turned out to be easier than I expected.

Maybe because it was time to say goodbye? Maybe because I think of them like real people, with real choices—good and bad—and real consequences.

What are the series ends that you really remember? Did you love them, or hate them? And why?

PJ here.  One randomly chosen person leaving a comment on today's blog will win a copy of "Before the Witches," the novella that kicks off Karina's Dark Mission series.  This giveaway is open to all countries serviced by bookdepository.com.