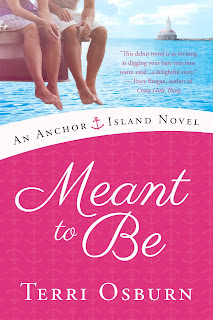 What happens when you finally meet the love of your life and he turns out to be your fiancé's older brother?

Elizabeth Chandler has spent her life pleasing other people and living other people's dreams.  She's a lawyer because that's the respectable career path the grandparents who raised her wanted for her.  Her workaholic fiancé has no idea what she likes or dislikes because he makes all the decisions in their relationship right down to the type of wine she drinks and music she listens to and because it makes him happy, she lets him.   She's suppressed every ounce of young Beth Chandler's creativity and zest for life in an effort to be what everyone expects her to be.  But that's all about to change.

Only for Lucas Dempsey would Elizabeth Chandler, a woman deathly afraid of the water, be on a ferry to the Outer Banks of North Carolina to meet her new fiancé's family.  Lucas was supposed to be with her but, once again, the law office where they both work has taken priority and left Elizabeth to make the crossing on her own.  She's in the midst of a full-blown panic attack when an over-sized dog and his gorgeous owner come to her rescue.  Charmed in spite of herself, by both this man and his dog, she introduces herself as Beth and allows herself to secretly indulge in the instant attraction she feels to this calm, sexy man with the adorable dimple.  Then she discovers he's her future brother-in-law.

Joe Dempsey has a mental image of the woman his younger step-brother is bringing home and it sure isn't a sweet, sexy young woman who makes his own pulse race.  They get off on the wrong foot and the instant attraction that sparks between them doesn't help matters but gradually, as they get to know one another, their feelings begin to shift and then deepen though they both fight it.  Joe loves his brother, even if he doesn't understand him or approve of the way he puts Beth last on his list of priorities.  He's not about to poach on his territory.  As wrong as he may feel Beth is for Lucas, and as right as he feels she is for him, he has too much honor to come between them, no matter how much he grows to care for her.  And Beth, no matter how much she comes to care for Joe, is not about to do anything to harm the members of the Dempsey family who have come to mean so much to her.  With the odds stacked against them, does this couple have any chance of a happy ending?

First of all, let me say that love triangles are one of my least favorite romance tropes but this story is written in such a way that I'm okay with the situation.  Once Elizabeth arrives on the island and begins to re-discover, as Beth, the person she is truly meant to be, it's obvious that she and workaholic Lucas would be a terrible match.  It also helps that the author keeps Lucas in Richmond and contact between them to a minimum, placing the focus of the story on Beth's journey of self-discovery and the developing relationship between her and Joe.  I also appreciated the fact that, in spite of their growing feelings for one another, both Joe and Beth have too much honor to betray Lucas.  And while I don't feel Lucas is the right brother for Beth, Osburn doesn't make him a jerk, just a man with some misplaced priorities.  It's my understanding that he will find his happy ending in the next Anchor Island book and that makes me very happy.

This is a debut book but you'd never guess it.  Terri Osburn writes with the skill of a seasoned veteran, drawing the reader into the heart of her characters and the small island they inhabit and making us care about them.  While there is plenty of humor and lighthearted banter, both Beth and Joe are complex characters with a depth of emotion that is slowly and skillfully revealed throughout the course of the book.  A rich cast of secondary characters add to that depth.  Particular favorites are Miss Lola, a spritely senior citizen with important lessons to impart, Dozer, a floppy-tongued dog that stole my heart - and Beth's - and Sid, a smart-mouthed but gorgeous woman, slowly learning to embrace her femininity, who ( I hope) is destined to lead Lucas a merry chase in the next Anchor Island story.  I can't wait!

I've known Terri Osburn for a number of years and watched her grow as a writer over that time.  Even though she's a friend, the process I followed in reviewing this book is the same as that for every book I read and I was fair and honest in my comments.

I'm delighted to say that I highly recommend this book.  It's sitting on my keeper shelf where I'm sure it will be re-visited.  Do yourself a favor and take a trip to Anchor Island through the pages of Meant to Be.

Have you discovered any good debut authors lately?

What books will you be taking to the beach, pool or backyard this summer?

Do you have a favorite place to read in the summer?  Is it different from where you read the rest of the year?

One randomly chosen person who leaves a comment will receive a Kindle version of Meant to Be.