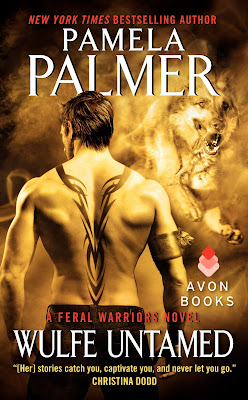 Fans of Pamela Palmer's Feral Warriors series have been waiting a long time for Wulfe's story to be told.  While the book won't be released until January 28, 2014, we're excited to reveal the cover today!  We have it on good authority (from Avon Books) that Wulfe's story is "a wonderful, romantic love story" but we're also told that Pamela Palmer "doesn't make it easy on our wolfishly hunky Warrior!"

Here's the synopsis of this long-awaited story:

Wulfe knows the end-game is approaching.  The Mage are preparing to free the Daemon plague and Wulfe’s own small strain of Daemon heritage has been awakened. Worse yet, the beautiful human he once rescued needs saving again. Though Mage sentinels are the ones after Natalie Cash, Wulfe knows his heart is what she really should watch out for. He’ll do everything he can to protect her…and keep his distance. Running for her life while trying not to fall for this gentle, wounded warrior, Natalie’s world’s been turned upside down. But when the Mage begin to free the Daemons, it becomes clear that the Ferals’ only chance of defeating them is for Wulfe to use Natalie to harness the dark forces-and risk becoming evil in the process. The future of the world hangs in the balance, but can Wolfe endanger the woman he loves to save her?

And to further whet your reading appetite, here's an excerpt:

“It’s me, boy. This might hurt, but I’ve got to staunch your wounds.”
Her fingers pressed gingerly, burrowing through Wolf’s fur, as she sought the site of the stab she’d seen him take to the shoulder. Warm blood coated her fingers and she knew she’d found it. As gently as possible, she pressed one of the shirts against the wound, then started searching for any others.
“Poor guy,” she whispered. “You chose the wrong night to come see me, but you probably saved my life.” She needed to get him to a vet. The beautiful animal made no sound, gave no indication of consciousness. He might be alive, but for how much longer?
Something skittered across the floor downstairs, stopping her heart for another moment. Why hadn’t they followed her upstairs? For that matter, how in the heck had she fallen asleep on the guest bed in the middle of an attack on her house? None of it made a bit of sense. The last thing she remembered was hitting one of the nasties with the lamp and the other one grabbing her. Had he hit her, then? She didn’t hurt anywhere. Somehow, she must have stumbled up here and passed out.
As she probed the dog’s side, she felt more warm blood and knew she’d discovered another wound. If only she could see them. If only she had a flashlight. Or…a camp lantern. Yes. Her camping supplies were stored in the closet in this room. Rising, she dug the lantern out of the bottom of the closet and turned it on only a little, bathing the injured animal in a soft glow.
He had blood everywhere. Her gut cramped. How was she supposed to know how much of the blood was his and how much belonged to the men? They’d been dressed so strangely, like some kind of foreign army, in matching blue tunics. And swords.
She pressed tee shirts against the two wounds she’d found so far, knowing she had to find the others, yet wondering what she was going to do with them if she did. She only had two hands. And no telephone or suturing supplies.
“Hang on, Wolf. Just hang on for me. Sooner or later, they’ll leave and I’ll be able to get you to a vet. What are they doing down there?” She heard something roll across the hardwood foyer. Roll. Suddenly she remembered the way they’d broken down her front door and relief left her on a hard exhale.
“It’s not them, it’s the wind. Of course, of course.” Leaping to her feet, she stroked Wolf’s head. “This is going to hurt, boy, but I have to move you if I’m going to get you help.”
She scooted around to his back end and, as gently as she could, lifted his hips and lowered them again a few inches out from the door. Moving to his head, she did the same, back and forth, a few inches at a time until she nearly had him far enough from the door to open it. Once more should be enough.
Sweat beading on her brow, she took a deep breath, squatted at his tail, and lifted his hips one more time.
Suddenly, her hands were empty, the dog just…gone…exploding in a spray of colored lights.
Natalie fell back, landing on her backside, then stared, jaw dropping, as a man appeared out of thin air…a huge, naked man lying on the floor right where the dog had been.
She crab-walked back, the bed catching her in the shoulder blades. This isn’t happening.
The man groaned and began to stir. Natalie tensed, her heart pounding violently in her chest as she pushed herself to her feet, then sank onto the bed when her legs refused to hold her.
Slowly, the man sat up and leaned back against the door, his muscular body marred by half a dozen stab wounds, one on the shoulder…right where the dog’s had been.
This isn’t happening. Dogs don’t turn into men. They don’t!
But even as the argument roared in her head, her gaze took in the sight in front of her. The man was built, his waist narrow, his abs ripped, his biceps as thick as tree trunks, one adorned with a thick golden armband with what appeared to be the head of a wolf. His shoulders were easily half the width of her sofa. Her gaze continued up, reaching his face, and her heart clenched. Scars crisscrossed the flesh every which way, tugging down one of his lips, cutting across one eye. His body might be prime, but his face was made for nightmares. Within that ruined face, eyelids lifted revealing dark eyes that turned to her, contracting on a sheen of pain, radiating a dismay so raw it almost made her ache.
“I’m not going to hurt you, Natalie.” His voice was low and urgent as he struggled to his feet, grimacing. Towering over her—he had to be a full seven feet tall—he watched her with eyes filled with the same intelligence, the same gentleness she’d seen in Wolf’s. “I would never hurt you.”
She was shaking, her pulse racing, her stomach cramping from shock. But not from fear. Because as she stared into those dark eyes, she saw only truth and honor and kindness. And, odd as it was, she recognized the essence of the dog in the man.
“I would never hurt you,” he said again, his voice throbbing with sincerity and desperation that she believe him.
“I know,” she told him.
And she did.

WULFE UNTAMED is available for pre-order in both mass market paperback and digital format.  Follow the links below: