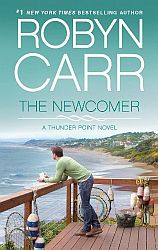 Say the words "small town romance" and one of the first authors that comes to my mind is Robyn Carr.  I first discovered her when the (original) cover of Virgin River captured my attention from the shelf of a local book store.  She leaped straight to my auto-buy list with that book and, while I've enjoyed some of her stories more than others, none of them has ever left me dissatisfied.  The Newcomer is the second book in Carr's new Thunder Point series set on the Oregon coast.  I'm already invested in the lives of the residents of this small coastal town and looking forward to many more visits to Thunder Point!

In The Newcomer, Hank Cooper, and Sarah Dupre begin to deepen the relationship they began in The Wanderer but there are obstacles to overcome. It appears that Cooper has finally stopped running and starts putting down roots at the same time that Sarah receives a promotional opportunity that will take her to the other side of the country.  As a Coast Guard search and rescue pilot, this is the chance for advancement that Sarah has been waiting for but accepting will not only endanger her relationship with Cooper, it will also have an impact on her younger brother, Landon, a star quarterback who would have to leave his team, his girlfriend and an excellent shot at a college scholarship to start over at a new school in his senior year.  Then a phone call from an ex-girlfriend sends Cooper's life in a direction he never anticipated.  Will all these changes bring Cooper and Sarah's relationship to an end just as it's gaining traction or will it strengthen the bond they've begun to form?

Single parents Mac McCain and Gina James have been close friends for many years.  Their daughters are best friends and the two have unofficially co-parented their respective children for a long time.  Just as they finally take the first steps into a deeper relationship, Mac's gorgeous ex-wife shows up out of the blue wanting to re-connect with the three children she abandoned when they were babies, sending Mac's family into turmoil and threatening his relationship with Gina.

It's not only the adults in Thunder Point who are having relationship issues.  Mac's daughter, Eve and Sarah's brother, Landon, rising high school seniors, grow closer and face the sexual "should we or shouldn't we" question that many teens have to deal with - a question that takes on new intensity with the reappearance of Eve's mother.  Eve loves Landon but knows only too well what can happen as a result of teenage sex as she was the reason her parents married too young.  And Gina's daughter, Ashley is having problems of her own. Her longtime boyfriend dumps her for a girl he meets at college and the new girlfriend uses social media to humiliate Ashley in a very public way...a humiliation that has potentially devastating consequences.

New characters are introduced, giving me just enough information about them to whet my appetite for their stories.  Hopefully, Carr will also continue to write stories that will allow me to experience the ebb and flow of the relationships between characters who have already secured places in my heart.

One of the aspects of Carr's writing that I most enjoy is the pace at which she builds the relationships in her books.  Those between Coop and Sarah, Mac and Gina, Landon and Eve and others are allowed to develop organically and while desire definitely plays an important part in the process, it's the friendship between each couple that gives me hope that their bonds will continue to strengthen over time, weathering the obstacles that life invariably throws our way.

For maximum enjoyment, I recommend reading the Thunder Point books in order beginning with The Wanderer followed by The Newcomer.  The third book in the series, The Hero will be released on August 27th.  I can't wait to find out what Carr has in store for Thunder Point's new high school football coach!

Are you a fan of small town contemporary romance?  Have you read Robyn Carr's books?  Do you have a favorite?  Are you reading the Thunder Point series?