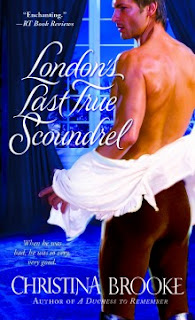 Returned from the dead but forced to give up his life's work as a scientist and discredited by his peers, Jonathon Westruther, Earl of Davenport flings himself into a an increasingly reckless life of dissolution and scandal until his cousins are forced to take drastic measures to save the man from himself.  Which is how a battered and bruised Jonathon awakens to find himself somewhere in the country and face to face with a prim and proper young woman who is about to turn his life upside down.

Miss Hilary deVere has spent her entire life trying to overcome her family's scandalous reputation.  A well respected young woman, she is nevertheless let go from her teaching position simply by virtue of the fact that she is a deVere and is forced to return to her family home where her brothers' drunken orgies are the norm.  She dreams of a London season, vouchers to Almack's and a quiet, intelligent, sensible husband.  What she encounters on her journey home is Jonathon Westruther, the devilishly charming scoundrel she was betrothed to in a private agreement between their late mothers; a man she thought was dead who puts a monkey wrench in her well laid plans when he turns up alive and intent on seducing her.

Jonathan has no interest in marriage which is fine with Hilary as she has no desire to marry him even though enough sparks fly between the two of them to start a forest fire.  When he ruins her last chance of a London season, he takes her there himself, certain that he can talk his well-connected cousin into sponsoring her. Of course, he still wants her and uses every opportunity to convince her to succumb to the desire.  Hilary is made of stronger stuff, knows exactly the type of rogue she's up against and blocks him at every turn.  The Earl of Davenport has definitely met his match!

As Jonathon and Hilary spend time together, their mutual desire grows as well as their liking for one another but many obstacles still block the way to a happy conclusion with Jonathon being the most stubborn of them all.  Will they make their secret betrothal a reality or will the reason for Jonathon's mysterious "death" tear them apart...permanently?

These two characters captured my interest from their first meeting and held it until I turned the final page, late the same night. Funny, poignant and sizzling with passion, they leaped from the pages and into my heart. Jonathon is one of those sexy scalawags that you know has a tender, wounded heart beneath the dissolute, "I don't care" persona on display and when he finally shows it, hearts (mine in particular) melt.  Hilary is a heroine with spunk and determination who only wants to belong.  She had me cheering for her every step of the way.  I love this girl!

London's Last True Scoundrel is another winner from Christina Brooke.  I highly recommend it!