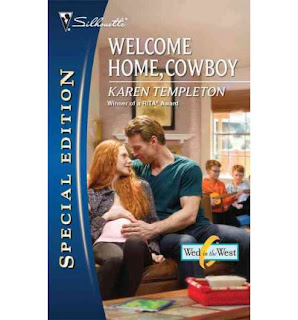 As anyone who's hung around the Second Helpings reviews for a while knows, I read a lot of category romance. I grew up reading Mills and Boons (Harlequins, although all ours came to Australia via the English office back in those dim, dark days) and I've retained a real fondness for something short and sharp that still gives me my romance fix.

Somehow in all this category romance, I've missed out on reading many Special Editions. Not sure why - maybe the authors haven't crossed my path yet. I've liked the Christine Rimmer books I've read, although again, she's a fairly new discovery for me. Love it when I find an author with a big backlist!

Another Special Edition author who's only recently crossed my path is Karen Templeton. So far I've read two of her books, but I've really enjoyed both, so I thought I'd share them with you here today.

I'm not usually a huge fan of the twofers that Harlequin are bringing out more and more regularly. You know, to get the book you want, you have to buy a second book that perhaps you're not so keen on reading. I suspect they're not quite as prevalent in North America as they are in Australia. But this is one occasion where the twofer thing worked for me. I read the book in the first half of the twofer and then thinking, why not?, I read the second. Partly because it was a continuity The second book was Karen Templeton's FORTUNE'S CINDERELLA and I just loved it.

By now, I'm sure lots of you are yelling at me to ask what particular rock I've been hiding under. It turns out Karen has won TWO RITA awards and is nominated again this year for A GIFT FOR ALL SEASONS. Clearly I've been missing out!

Both of these stories fall firmly into the 'heartwarming' basket of the romance genre. The people are pretty nice all round. Even the not so nice ones have redeeming features. There's not much melodrama or over the top operatic emotion. Instead, you get deeply felt, realistic stories about people finding redemption and love and fulfilment where they least expect it. And life asks them to step up to the plate - show courage and gumption and forgiveness - before they get their happily ever after. Lovely, lovely stuff all wrapped up in beautiful writing and great use of setting. There's a texture of real life about these romances that I really enjoyed. I could imagine these people living next door to me - and they wouldn't spoil the neighborhood either! 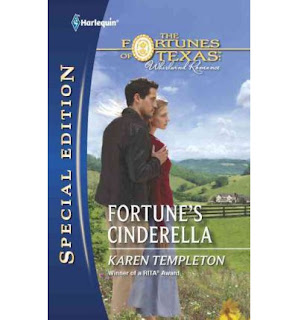 I'm not sure if it's an ongoing theme in Karen Templeton's work, but both these books feature women from everyday backgrounds who fall in love with exceptional men. Or at least men who are recognized as exceptional in their world, whereas the heroines while remarkable, are remarkable in a quiet way.

In FORTUNE'S CINDERELLA, rich and handsome Scott Fortune finds that his life and attitudes change in a major way after a tornado traps him inside a wrecked airport. All his previous dreams, ambitions and romantic relationships seem petty, now that he's looked into the face of death.

His companion through this harrowing experience is down-on-her-luck waitress Christina Hastings. Christina is one of life's survivors and she's done it with a smile on her face and impressive guts and determination. Her courage and good humor through their agonizing ordeal so impresses Scott that he decides he can't let her go.

Instead of acting like the original Cinderella and developing an obsession with footwear and a yen for life in the palace, Christina is much less trusting. Scott comes from a world of privilege and money. She's from the wrong side of the tracks. Even as she finds herself falling in love with Scott, much against her better judgement, she knows she doesn't belong with him.

It's an emotional rollercoaster watching these two come together and the ending is lovely. Both Scott and Christina learn from one another and as in all the best romances, they're better, more complete people at the end, not just as part of a couple but as individuals. Big sighs of satisfaction all round!

So after reading this delightful romance, I rushed to the Book Depository to grab another Karen Templeton book. I settled on WELCOME HOME, COWBOY. I didn't realize until I wrote this review that it won the best category romance RITA Award in 2011. I can see why! It's a doozy of a read.

Again, we have an outwardly ordinary heroine. Recent widow Emma Manning is struggling to keep the family farm afloat, but she's pregnant, she's trying to cope with caring for two children as a single parent, she's deeply in debt, not to mention grappling with her grief over the loss of her beloved husband Lee. But for all these troubles, Emma isn't a tortured heroine. She's refreshingly grounded and independent and stubborn. I grew up on a farm and she's very believable as a down-to-earth farmer.

As if she hasn't got enough troubles, Cash Cochran stumbles into her world and shows every sign of causing trouble, however good his intentions. Cash is a world-famous but burnt-out country singer who as a teenager abandoned his home and his best friend Lee for the bright lights. He's back now to make amends to Lee's widow and to the land where he grew up. But how can he make amends when he finds himself helplessly attracted to Emma?

Wow, talk about an emotional punch. Guilt. Forbidden love. Old sorrows and secrets. Not to mention a tortured hero (he's just so tortured, which is one of the reasons he and Emma make such great foils for one another). Cash is really sexy - I kept thinking of Keith Urban when I read it - and he's spent a lot of time running from his demons. His journey toward becoming the man he was born to be is heart-wrenching and unforgettable.

A three hanky read, although there's plenty of humor and some sizzling love scenes, WELCOME HOME, COWBOY is worth hunting down. A lovely affirmation of the power of love and the human spirit.

So are you a Karen Templeton fan? Which ones should I read next? Have you read her RITA nominee this year, A GIFT FOR ALL SEASONS? Do you like reading about celebrities like actors and singers in romance? 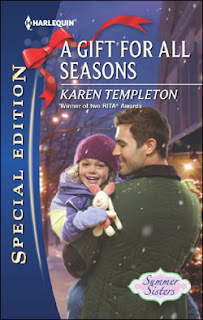 PJ here, popping in with an editorial note from the RWA National Conference.  On Saturday night, Karen Templeton won the RITA for Best Long Contemporary Series Romance with A Gift for All Seasons.  It was Karen's third RITA win and secured her a place in the Romance Writers of America Hall of Fame.  Congratulations, Karen!
Posted by Anna Campbell at 12:00 AM