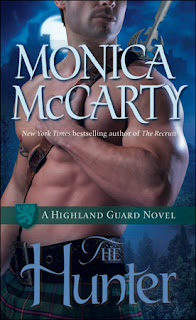 I'm a proud fan of medieval romance and have been an avid reader of Monica McCarty's books since the publication of her debut, Highlander Untamed, in 2007.  Her attention to historical detail, three-dimensional characters, fast-paced stories, heart-pounding action and heart-melting romance make her an auto-buy author whose books all have places of honor on my keeper shelves.  With each story she writes, she elevates the excellence of her craft.  I can't wait to see what she brings us next!

A member of a secret group of elite warriors serving Robert the Bruce in the fight for Scotland's freedom, Ewan "Hunter" Lamont is unquestionably the best tracker in Scotland.  The chieftain of a small clan, he's dedicated to Scotland's cause and firm in his belief that women belong at home, not secretly acting as couriers for the church in Scotland's battle with the English.  That's a belief that will be tested time and time again when he meets a feisty Italian nun by the name of Sister Genna.

A lady by birth, Janet of Mar has allowed everyone to believe that she was killed in a bridge explosion during her ill-fated attempt to rescue her twin sister from the English.  Now known as Sister Genna, Janet lives in the disguise of an Italian nun while acting as a courier for the church in their attempt to aid the Scots in the battle with England.  She's met Hunter before and is both intrigued and infuriated by the man with whom she shared a passionate kiss; a kiss that has both Janet and Hunter running for emotional cover.

When Sister Genna/Janet goes missing, Ewan is sent to find and rescue her.  This time, though, he knows that the woman he seeks is no nun, however that doesn't make her more accessible.  In fact, it makes her less so as the Bruce has promised her hand to another - a fact of which Janet is not aware - and Ewan will not steal a woman meant for another, no matter how his heart yearns for her.

Janet is determined to use her wits, her strength and her considerable skills as a soldier for Scotland.  If she decides to take a husband, and in her mind, the possibility of doing that is extremely remote, it will be her decision and her's alone.

"You can't seriously be considering becoming a nun?"
After what had just happened, it sounded just as implausible to her.  But she would do what she must.  "If that is my only alternative to marriage."
"You make marriage sound like a death sentence.  Would it really be so horrible?"
She thought of her family.  Yes, it would be.  How could she explain?  How could she make him understand what to him - to most men - must seem unnatural?  "I would lose myself."

Ewan's heart belongs to Janet but will he also give her his respect?  Will he turn his back on a lifetime of honor and duty to embrace this woman he loves?

Will Janet lower her emotional shields enough to offer Ewan her love and trust?

Surrounded by danger and the English army, will they live long enough to make it back to the Bruce?  And, once they do, will they find the courage to risk losing all they hold dear by going against his edict that Janet marry another?

Are you a fan of medieval romance?  Any medieval books you recommend?  Have you read Monica's books?  Which one is your favorite?

Review and one giveaway copy of The Hunter received from TLC Book Tours.  Other stops on this blog tour can be found by clicking here.