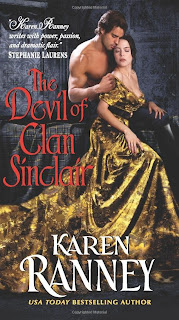 Virginia Anderson is the only child of a wealthy American industrialist. She grew up at Cliff House, the family home in the state of New York. Her mother died giving birth to Virginia, and her father was a distant, rarely seen figure throughout her childhood. Virginia’s life was largely interior and isolated except for her governesses from whom she often hid. When she reached marriageable age, her father insisted on taking her to England to find her a title. His first choice was a duke, but he had to settle for an earl—Lawrence Taylor, Earl of Barrett. What mattered was that his son-in-law held a title. It didn’t matter at all that Virginia had fallen in love with a Scotsman, a man with whom she could talk and laugh, a man who made her feel beautiful.

Macrath Sinclair is a self-made man, an inventor and newspaper owner who has amassed a fortune he is bent on increasing. Having grown up poor, Macrath is determined to build an empire so great that he and his family will never again do without the things they need and want. The fierce and fearless Macrath, known as the Devil of Drumvagen in the tiny Scottish village where he makes his home is an unlikely match for the shy, diffident Virginia, but they bring out the best in one another. But Macrath is forced to give up on bringing Virginia to Drumvagen when he receives a note saying Virginia has chosen a title over what he could offer her.

Virginia lacks the means and the courage to defy her father when he announces that he has arranged her marriage to Lawrence Traylor, Earl of Barrett. The exchange of title and money brings no happiness to either party. The earl loathes his bride so much that he can’t bear to touch her, and the only thing that keeps Virginia from total despair is the affection in which she holds her two young sisters-in-law. Virginia has been a wife scarcely a year when the sickly Lawrence dies and makes her a widow, an impoverished widow at that since Lawrence wills all the money he has not spent to a “male heir of his body.” With no male heir, all the money Virginia brought to the marriage and all she inherited at her father’s death and all the houses and land Lawrence purchased with those funds will go to his nearest male relative, a man with seven children, an unpleasant wife, and no inclination to support the Traylor women.   Her mother-in-law persuades Virginia that their only hope of survival is for Virginia to find a man to impregnate her and hope for a son they can pass off as Lawrence’s. Virginia can think of only Macrath. With her mother-in-law’s help, Virginia travels to Scotland. After a rapturous reunion that allows Macrath to believe that will be wed at last, she leaves him and returns to England.

Even then an angry and betrayed Macrath can’t forget Virginia. He tries to, but after months in Australia, he arrives in England determined to see her. Instead, he learns that Virginia is seriously ill, having barely survived smallpox, and that she has a child. Macrath knows the child is his, and he kidnaps his son, taking him, the child’s wet nurse, and nursery maid back to Scotland. Motherhood has given Virginia a backbone, and she follows them to Scotland. No one is going to separate her from her child, who is the Earl of Barrett in the eyes of the world. The battle ensues, as Virginia and Macrath fight one another, their own emotions, and a common enemy before arriving at their HEA.
Did you ever read a book and know that you are just not the audience for it? That was my position with this book. I don’t share the passion may of my friends have for Scottish romances, I like strong heroines, I prefer understated drama to the spectacular, and I’m a tough sale for the impregnated-by-another-man plot. The Devil of Clan Sinclair is a well-written book, overflowing with high drama and passion and a truly creepy villain. I have no doubt that some readers will love it. I didn’t.

I struggled to suspend disbelief at a dozen points, including the convenient-for-the-plot death of Virginia’s father, the conviction that the child would be a boy, and Virginia’s two trips to Scotland. I can imagine some readers screaming about Virginia’s spinelessness for the first half of the book, but, given her nature, her upbringing, and the realities of women’s legal position in the 1860s, I could accept her lack of open defiance. But I hated that even within herself, she is passive until she becomes the mother bear.

For me, Macrath is the redeeming factor. I have a fondness for self-made heroes, and I loved his intelligence, his loyalty, and his stubborn love for Virginia. His reaction to his devil title is delightful, and his scenes with his son are definitely aww moments. He is a great hero. The best thing about Virginia is that she’s smart enough to fall for him.

So, my recommendation on this one is that if you love Scottish romances with lots of angst and drama, you may find this a rewarding read. If, like me, you prefer imagination’s tune to have a few more notes of reality, and you prefer subtlety to spectacle, this one probably won't be a book you want to rush to read.