On the 9th August, I saw the sad news that Elizabeth Peters had passed away at the age of 85 at her home in Maryland. Her Amelia Peabody books have become a real favorite in the last few years and now I'm addicted to the Vicky Bliss books. This review was originally scheduled for next month, but I've put it up today as a tribute to a marvelous writer who has provided me with many hours of wonderful entertainment.  She will be missed.

As many of you know, I've long (well, the last few years - nobody has ever accused me of being au courant, as they say in the best Regencies!) been a huge fan of Elizabeth Peters's Amelia Peabody books, featuring a headstrong and managing Victorian woman and her curmudgeonly but lovable husband Emerson, as well as assorted eccentric (and in the case of Ramses, their son, extremely sexy!) family and friends. But until very recently, I hadn't ventured further into EP territory. 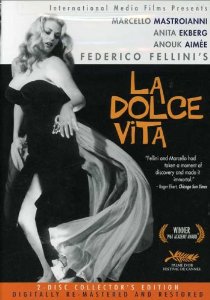 Vicky Bliss is a unique character. She's gorgeous - I keep thinking of bosomy blonde Anita Ekberg from LA DOLCE VITA. In case you don't know her, that's a picture on the right. You can see what I mean about blonde and bosomy! But Vicky also has a brain like a steel trap.

Naturally, her film star/call girl looks get in the way of the respect people pay her brain, both to her advantage and not. In her career as an art historian, she wants to be taken seriously, but the dumb blonde act really helps when she's out solving mysteries (yes, this is another mystery/romance series - I seem to be addicted to them at the moment).

In these earlier books in the series, the casual sexism that Vicky encounters was probably funnier when the stories were written starting in the 70s, but there's still enough sexism around (more than enough, sadly!) for the jokes to retain their point. The books are written in first person and Vicky's voice is great - smart and snarky.

There's a link between the Peabody and Bliss series - a kind of sly joke about academic practice. Vicky Bliss is credited as the editor of the Amelia Peabody papers from which the earlier stories supposedly come.

The first book is fun - one of the great things about all the Elizabeth Peters books is their wonderful acerbic humor, sometimes tumbling over into uproarious slapstick. BORROWER OF THE NIGHT was released in 1973 and introduces Vicky who at this stage is a penniless history lecturer looking for something to keep her in the lifestyle to which she'd like to become accustomed. When she stumbles across a clue to the whereabouts of a priceless 15th century German shrine, she sets out in search of the discovery that she believes will make her reputation.

Unfortunately, assorted bad guys have also twigged to the shrine's possible whereabouts, so a host of potential villains descend upon Rothenburg in Germany. Not to mention the family who originally owned/stole the shrine want to get in on the act too to restore their sadly decayed fortunes. Mayhem and hijinks ensue (actually I could basically just write this review as "Vicky Bliss books - mayhem and hijinks ensue"!). Be prepared for skullduggery, ghosts, false identities, danger, suspense, laughs, silliness, romantic intrigue. Pretty much the whole kit and kaboodle. A quick and entertaining read that makes a great introduction to the series. And you'll learn a bit about German medieval/renaissance history in a painless fashion. 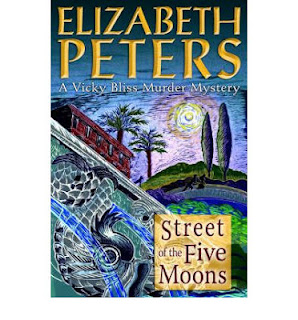 Then we come to book 2, STREET OF THE FIVE MOONS (1978). This one's a completely different kettle of fish. The world is still fun and mysterious and dangerous. But there's the added zing of sexual tension when Vicky's quest to uncover a gang of brilliant jewelry forgers places her in the path of charming but nefarious thief Sir John Smythe.

Sir John is a breed of hero I adore (think Raffles or the Scarlet Pimpernel, if the SP was purloining the jewelry belonging to the people he rescues from the guillotine). Aristocratic. Witty. Outwardy uncaring and selfish, but concealing the heart of a hero, much as he wishes he doesn't. On a personal note, Sir Richard Harmsworth from my next release A RAKE'S MIDNIGHT KISS is of this ilk! Love a hero in spite of himself!

Vicky is pretty smart-mouthed in her sassy American way and Sir John is bitingly witty in that brittle English upper-class way. You'll find yourself laughing when you read their prickly exchanges, even though it's perfectly clear to the (romance) reader that these two are made for each other. But how can a rising academic hitch her wagon to a conman/drifter/criminal? No matter how gorgeous he is! Sigh. 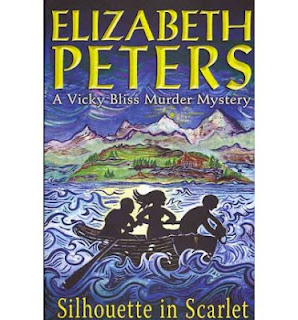 The third book SILHOUETTE IN SCARLET (1983) places Vicky in the land of her ancestors, Sweden, and on the trail of a priceless Viking treasure. Speaking of which, don't you just love the cover of this one? Valkyrie Vicky in very Viking pose (and that sentence was brought to you by the letter 'V').

As you've probably gathered by now, various bad guys are also on the hunt, including her sneaky and cheeky lover Sir John. There's the usual great mixture of adventure and laughs and romance and again, some nice info about Viking history. A spoonful of sugar makes the history go down in the most delightful way!

I'm really looking forward to reading the rest of the books in this series. Hurry up, Annie, and send them to me! If you like beautifully rendered exotic settings, brilliant humor, a nice bit of romance and a clever and resourceful heroine, not to mention an intriguing mystery, I highly recommend these.

So do you enjoy romantic mysteries? Any favorites? Do you like books where the romantic subplot continues over several stories without being resolved in the actual story? I really love the exotic settings of these. Has any exotic setting in a book ever prompted you to travel somewhere?
Posted by Anna Campbell at 12:00 AM