Some Like It Hot
By Susan Andersen
Publisher: Avon
Release Date: July 30, 2013 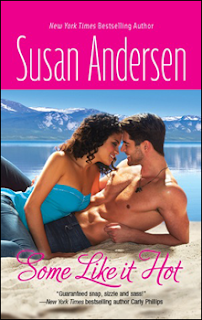 Harper Summerville may be a rolling stone, but she has settled with surprising contentment into her new job as summer activities director at the Brothers Inn in Razor Bay, Washington. She likes her job, she likes her boss, Jenny Salazar, and she really likes the spectacular scenery in Razor Bay. This liking encompasses both the spectacular views of the Olympic Mountains and the fjord that is Hood Canal and the sightings of Razor Bay’s sigh-worthy deputy sheriff, Max Bradshaw. But there is more to Harper Summerville than the citizens of Razor Bay realize. She is not in Razor Bay for the job, the scenery, or the deputy; she is there to covertly check out Cedar Village, a home for at-risk boys, to see if it deserves a grant from her family’s charitable foundation.

Max Bradshaw is a big, taciturn guy whose tough exterior hides a heart larger and more vulnerable that anyone suspects. He is enjoying his newly established brotherly relationship with Jake, the half-brother he hated when they were kids. He is invested in seeing that the troubled boys at Cedar Village get the kind of support that helped him turn his life around. He keeps telling himself that Harper Summerville is not for him, but the chemistry that sizzles between them every time they are together is hard to ignore. And those times seem to happen often between Jake and his fiancée Jenny’s throwing parties and Harper’s volunteering to help out at Cedar Village. But Max’s roots in Razor Bay run deep, and Harper is there temporarily. Then there’s the matter of the secret she’s keeping. The road to an HEA never did run smoothly.

An author known for her ability to evoke place in her books, Andersen vividly and visually presents Razor Bay, and her affection for the Pacific Northwest comes through clearly. Max lives up to the promise of a rough-edged hero in need of a healing touch that won readers’ interest in Jake and Jenny’s story (That Thing Called Love). He’s my favorite kind of wounded hero: he has some heavy emotional baggage, but he’s trying to move past it, nor drown in it. I had a more difficult time understanding Harper. Her gotta-keep-movin’ obsession struck me as over the top. I was also disappointed that the Cedar Village youths never come to life in the way that Austin and his friends did in That Thing Called Love. I was surprised too since Andersen usually does great kid characters.

Susan Andersen was writing smart, sexy contemporary romance that evoked a smile, tugged a heartstring or three, and sent the sensuality meter into the red zone when that kind of truly contemporary story was much rarer than it is today. Some Like It Hot is not her best book, but it is one that Andersen fans will likely enjoy. If you are new to Andersen, this one is not her best. I recommend you start with That Thing Called Love or download a copy of Head Over Heels, the first book in her Marine series, or add her Baby series to your ereader, or grab a copy of All Shook Up when it is reissued in November. As for me, I like Razor Bay, and there’s that mysterious connection between Jenny’s best friend Tasha and the third Bradshaw brother, Luc. Count me in for their story.