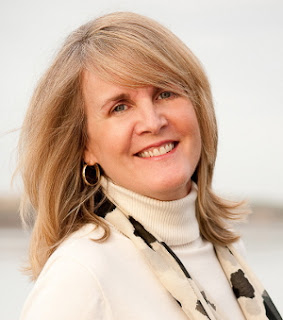 Double Rita®-finalist and USA Today bestseller Kieran Kramer writes Regency historical romances and now contemporary romance for St. Martin’s Press. THE EARL IS MINE, the second in her House of Brady series, is her latest release. SAY YES TO THE DUKE premiers in August 2013. SWEET TALK ME, set in present-day South Carolina, comes out in March 2014. A former CIA employee, journalist, and English teacher, Kieran’s also a game show veteran, karaoke enthusiast, and general adventurer.  She lives where she grew up--in the Lowcountry of South Carolina--with her Naval Reserve commander husband and their three children.

Connect with Kieran online at the following locations:

Hi Kieran!  Welcome to the Romance Dish!  Congratulations on the release of SAY YES TO THE DUKE, the third novel in your House of Brady series.  Please share with our readers what they can expect from this book.

It’s so nice to be here! Thanks so much for hosting me. As for SAY YES TO THE DUKE, readers can expect a sexy love story about a not-so-typical hero and a middle sister—one who needs to find her own way out of the shadow of a gorgeous older sister and an adorable younger one. Is she going to say yes to the life that she’s expected to live? Or will she rebel? It’s why I chose to set the book outside of London, in the country, where Janice will feel less familiar with her surroundings.

I had a lot of fun creating the secondary characters for this story, too. And as always, I bring back some familiar faces near the end of the book. They’re all new to Luke, however, and in front of a very large audience of Brady family members, he has to confront his own demons…will he or won’t he claim what’s his?

I was a fan of the Brady Bunch television show and have been enjoying your Regency spin on the series.  Everybody I know who watched the show has a favorite character.  With which of your Brady characters do you most closely identify?

I think I most closely identify with Jan because I’m a middle sister, too! I know everyone makes fun of her on the show because she was jealous of Marcia, but Jan is someone that I always liked. She was a good sport! And as she got older on the show, she absolutely blossomed.

Is there a different character you wanted to be more like?

I’ve always wanted to have the cool poise of Marcia, LOL!!! But I still wouldn’t trade her for Jan. <g> 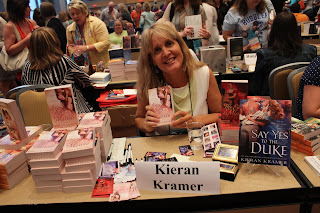 It was a pleasure seeing you at the recent RWA conference in Atlanta.

It was lovely to see you, too, and to be around so many women who love romance!

Will you be anywhere else this year where readers will have the opportunity to meet you?

Thanks so much for asking! So far all I have left in 2013 is the Lady Jane’s Salon in North Carolina. I need to find out exactly when that is, LOL! Readers can find me just about every year, too, at RWA and RT.

PJ here.  Kieran will be reading at Lady Jane's Salon RDU at 7pm, September 25th at the Hibernian Restaurant and Pub in Cary, NC.  Check the LJS website for more info.

Authors are typically in the position of having to answer questions.  Let’s turn those tables today.  If you could ask one question of Lady Janice and Luke Callahan, what would you ask? (And, if they happen to be anywhere in the vicinity, we’d love to hear their answers!)

I’d love to ask them a question!

Hey, you two, now that you’re together, is there anything you’d change about how that came about? I mean, it’s amazing that it happened at all, considering all the things going on in your own lives at the time the book took place.

Luke: I’d change absolutely nothing. Our story unfolded as it should. We would have found each other somehow, I’m sure of it.

Janice: (kissing his cheek) That’s very sweet of you, but think of something, darling!

Luke: (with a grin) Very well. If you insist. The only thing I’d change is how long it took me to realize that Janice is the great singer that she is. (Janice blushes hot red) It wasn’t until our honeymoon that I got to hear her. And now I can’t go a day without having her sing to me at some point. My favorite time is when we’re riding together—I’ll put her on the saddle in front of me, and she’ll sing me a ballad.

Janice: (laughing) I do have one adoring fan, and it’s Luke.

Luke: You have far more fans than I, my dear. (leaning toward the interviewer) She’s been invited to sing in many a drawing room in London. It seems that I’m not the only one who’s been surprised by her talent. She hid it for a long while.

Janice: Only because I was shy. (laughing) But I determined after all I’d been through in our story, SAY YES TO THE DUKE, that surely I had the bravado necessary to perform before a crowd. I was such an adventuress in the story, wasn’t I, Luke?

Luke (raises her knuckles to his lips and kisses them softly): Yes, you were, and I thank God for it every day, my love.

::Sigh::
What’s next from Kieran Kramer?

Big news for my historical readers! I’m writing a contemporary romance called SWEET TALK ME! It takes place in South Carolina in a fictitious seaside town called Biscuit Creek. I’ve always written both contemporary and Regency, so after seven Regencies, I decided it was time to get my contemporary career going, too. It’s been fun working on something different! It comes out in March 2014.

Can't wait to read this one, especially as it takes place in my own "back yard."  :)

Do you have a question for our readers today, Kieran?

Yes! I’d like to know what’s your favorite kind of heroine? Everyone seems to focus on discussing the hero these days. But I think the heroine needs a little time in the sun! I’d love to know your thoughts. And thanks so much for joining me here today!!

Thanks, Kieran!   I appreciate you taking the time to answer my questions!

Thanks so much, PJ. This was a really fun interview. I hope you and your readers have a great autumn filled with lots of good books! 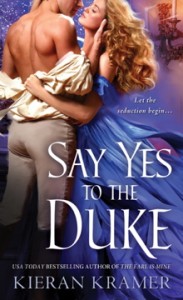 CAN A SCANDALOUS BEGINNING…
Janice Sherwood wants to marry for love, but she’s failed to make a match after two Seasons. Her parents, the Marquess and Marchioness of Brady, arrange to send her to the Duke of Halsey’s country estate as a short-term guest of his grandmother, the dowager, in hopes that she might win the duke’s affections. What they never could have imagined is that Janice would fall for the ruggedly handsome servant Luke, who lives in the stables and carries an air of mystery and temptation.

LEAD TO A FAIRY-TALE ENDING?
When Luke Callahan learns that he is the legitimate heir to a dukedom, he will stop at nothing to claim what is his. But first, he must begin a game of disguise to secure his rightful inheritance. Janice isn’t part of his plan. But by engaging her in this dance of deception, might he lose her forever? 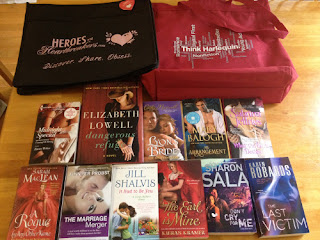