Guest Review - - The Passion of the Purple Plumeria 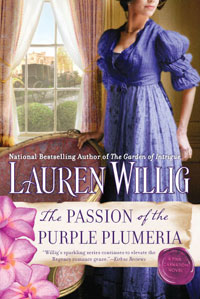 Eloise Kelly knows that her time in England is drawing to an end. Her research on the Pink Carnation has hit a dead end. Search as diligently as she can, she cannot uncover any reference to Miss Jane Wooliston or Miss Gwendolyn Meadows after 1805. She only hopes that her romance with Colin Selwick is not coming to a dead end as well. They have grown very comfortable together during the months she has lived with him at Selwick Hall, his ancestral estate, but Colin has said nothing to suggest permanence, and Eloise is committed to a full teaching schedule at Harvard for the coming year. With two months left, she needs some answers for the good of her thesis and her heart.

Eloise will eventually learn that in 1805, Jane Wooliston returned to England because her younger sister Agnes and a schoolmate had disappeared from Miss Climpson’s Select Seminary, their Bath boarding school, and Jane fears that Agnes may have been kidnapped because of her. She feels compelled to leave France and return to England, and where Jane goes, there too goes her prickly, occasionally proper, frequently parasol-bearing chaperone and fellow agent, Miss Gwen.

Jane and Miss Gwen have barely begun their investigation in Bath when Colonel William Reid, the father of the other missing girl, turns up, understandably surprised and concerned that his daughter Lizzy is not where he expected her to be and no one knows where she is. (Faithful followers of the Pink Carnation series will remember Agnes and the redoubtable Lizzy from The Mischief of the Mistletoe and Colonel Reid as the father of Alex Reid, the hero of The Betrayal of the Blood Lily, 2010). Colonel Reid has left India, where he has spent the greater part of his life building a military career, to spend more time with the two daughters he sent to England almost a decade ago. He is determined that he will be involved in the search for his daughter,

Miss Gwen knows he will be trouble for her and for the Pink Carnation, but none of the warnings her instincts are sounding comes with instructions for ridding herself of the handsome colonel. The two set out to find the missing girls. Instead they find that the colonel’s older daughter Kit is not where he thought she was either, and she has not seen her younger sister. When the two are attacked as they leave Kit, the colonel discovers that the Miss Gwen’s parasol disguises a sword as effectively as any gentleman’s cane, and Miss Gwen discovers that the man she has declared a rogue is just the kind of fellow one wants to have at one’s back in a tough fight. Together they defeat their thuggish attackers, but the colonel is wounded. Nursing an injured soldier may not fit well with Miss Gwen’s image, but she does it very well. And the experience tears down some barriers between the two that will not, cannot be rebuilt.

By the time the missing girls are found, the Pink Carnation and company have fought a major battle, solved the mystery of a sultan’s fortune in jewels, and set the lives of Jane Wooliston and Miss Gwen in new directions. Generations later, those same jewels, supposedly hidden on the Selwick estate, add to the tensions between Colin and his cousin/step-father, the repellent Jeremy Selwick-Alderly. When the two are ordered to work together by the old lady, Colin’s great-aunt and Jeremy’s grandmother, who loves and intimidates them both, they do so and, with the help of a centuries-old book, The Convent of Orsino by A Lady, find not only a fortune but a degree of harmony and information Eloise desperately needs for her research.

Each time I read a new Pink Carnation book, I am persuaded that it is my favorite in the series, but I think this one may prove to be the lasting best. From the opening sentence when Eloise tells Colin, “I seriously doubt that the lost jewels of Berar are under your bath mat” to the final three words “Yes, we have,” I loved this book. I loved the events of the frame story, but the story of Gwendolyn Meadows and William Reid delighted this reader’s heart on at least four levels.

“I’ve always been one for Mozart myself, “said Colonel Reid. “There’s a nice bounce to his music, and it all always comes out right in the end.”

“Neither is singing out one’s woes at the top of one’s lungs,” countered Colonel Reid. He grinned, “When was the last time you’ve done that? With an orchestra to follow one about, no less.”

“Most of the orchestras I’ve encountered,” said Gwen, “are remarkably stationary.”

The lines at the corners of Colonel Reid’s eyes crinkled. “Do you ever allow anyone else the last word, Miss Meadows?”

“Not if they haven’t wit enough to seize it,” said Gwen.

“That,” said Colonel Reid, ‘sounds remarkably like a challenge.”

2.      I loved that this is a love story between two people over the age of forty, multi-dimensional people who have their share of baggage, who have made their share of mistakes, and who have developed quite effective personae that allow the world to see only what they want seen. I love that their romance is sweet and funny and passionate.

3.      I love that Lauren Willig succeeds superlatively well at her stated purpose of revealing the Gwen that lives within the Miss Gwen who has charmed and entertained readers through many books. (And the pair of interviews in the bonus material just may be my favorite book bonus ever.)

4.      Finally, I love that a beloved series that might well have ended with this book has turned in new directions that will yield more stories. The Mark of the Midnight Manzanilla will be released in August 2014, followed by the as yet untitled Pink XII, which, according to Willig, “will probably be out at some point in 2015.” I hope there will be more. I figure the Reid offspring alone deserve at least three. There’s Kat, whose story Willig has already mentioned; Jack is such an intriguing character that his story cries to be told; and surely Lizzy with her promised ten parasols with swords will prove to be a worthy heiress to the traditions of her stepmother.