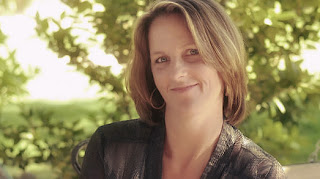 It's my pleasure to spotlight New York Times and USA Today best-selling author Catherine Bybee and her latest release, Fiancé by Friday! From her bio: Catherine was raised in Washington State, but after graduating high school, she moved to Southern California in hopes of becoming a movie star. After growing bored with waiting tables, she returned to school and became a registered nurse, spending most of her career in urban emergency rooms. She now writes full-time and has penned novels Wife by Wednesday, Married by Monday, and Not Quite Dating. Bybee lives with her husband and two teenage sons in Southern California.

Please welcome Catherine as she joins us on her Fiancé by Friday blog tour! 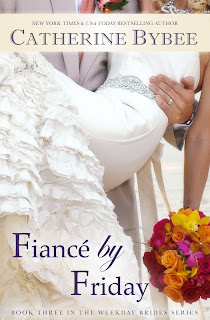 
The beautiful high-born daughter of an English duke came to America to take over her sister-in-law’s matchmaking business. But just because she’s the boss doesn’t mean she can’t fantasize about making her own perfect match with bodyguard Neil MacBain. Will the enigmatic man who haunts her dreams cost her more than she bargained for?


The retired Marine can’t deny the effect blue-blooded Gwen has on his troubled soul or his battle-hardened body. Bus as a client, Gwen is off-limits—until a threat from Neil’s past returns… and Gwen is caught in the crossfire. Now to keep her safe he will risk it all: his career, his life… and his heart.

PRAISE FOR FIANCE BY FRIDAY


and will linger  long after readers cross the finish line.


full of danger an sexual tension.”

“The hottest love on mainstream paper…


Ms. Bybee does not disappoint.”


BLOG TOUR CONTEST!  For a chance to win one of Catherine's blog tour giveaways -a Kindle Fire or Amazon gift cards - complete the Rafflecopter form below. 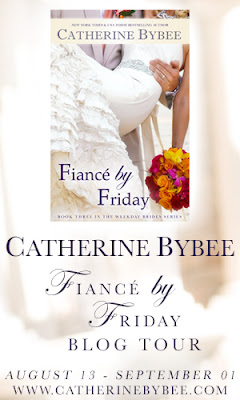 Eliza flagged down a waitress and ordered a martini. “I see not a lot has changed,” she said after the waitress left.


“We’re sitting in a bar and your giant shadow is lurking in the back of the building.” Eliza tossed a peanut in her mouth.


Eliza looked o the right of the bar. “Yeah. The man who acts like you’re a job but can’t seem to leave you alone. If it was anyone other than Neil I’d be afraid he was a stalker.”


Gwen twisted around in her chair. Sure enough, perched at the edge of a seat on the far side of the bar, sat Neil.


His eyes found hers for a brief moment before she looked away.


Her back teeth started to grind. “I don’t’ need a babysitter.”


“I don’t know, Gwen. The last time we sat in a bar I remember a certain someone getting drunk and a couple of other someone's getting into a fight.”


She’d never live that down. Gwen and Eliza went to blow off steam in a Texas bar. The cowboys were full of “yes, ma’am” and “howdy, darlin’.” They danced and carried on…and yes, she drank a little too much. When one of the cowboys mistakenly took her smile as an invitation for intimacy, Neil erupted form the bar to teach the cowboy the meaning of the word no.


It was the first time Neil had defended her honor, and though she hated to admit it, she got a kick out of how ticked off he became when another man looked at her. “That was last year.”

“What’s changed since then?”


Nothing! It didn’t matter how much she flirted with the man, or how obvious she was about her attraction Neil didn’t bite.


“Everything.” Gwen stood, ready to put Neil I his place. “If you’ll both excuse me for a minute.”


She pushed her way through the crowd as if on a collision course with Neil. He kept his lips in a thin line as she approached and gripped the longneck bottle at his side. Slipping between the woman on the stool next to him and Neil’s massive frame, Gwen slapped a hand on her hip and growled. “What are you doing here?”


He blinked, once and picked up his beer. “Having a drink.”


She wanted to scream. “Having a drink,” she repeated.


He tilted the bottle back, took a swig.


If stomping her foot would knock some sense into him, she’d stomp better than a farm girl in a vineyard.


Poking a finger into his chest, she moved closer. “Do you have any idea how difficult it is to have a love life with a tow-hundred-thirty-pound bodybuilder standing in my way?”


A muscle in his jaw tightened. “Two hundred and fifty.”


He lifted his beer again, but before he could take a swig, Gwen grabbed it from his fingers and tilted it back herself.

In a move that would make Eliza and Karen proud, she pushed the empty beer bottle back into his hand and slid between his thighs.


The strong musky scent that was pure Neil invaded her senses. She dropped one hand to his thigh and left it there. “This is how I see it, Neil. You have two choices. Either back off or step up.”
Gwen squeezed his thigh before vacating his personal space and marching back to the girls. A satisfied smile stretched over her face.


So, dear readers, doesn't this sound like a great contemporary romance?? Who doesn't love a good bodyguard story? Have you read Catherine's books before? If so, what's your favorite? If not, what is your favorite bodyguard romance? And please check this one out if you get the chance!
Posted by Andrea at 12:30 AM