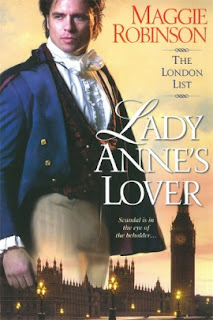 Lady Imaculata Anne Egremont is no stranger to scandal.  For years, her exploits have been headline fodder for the London List and on the wagging tongues of the ton.  But when an encounter with Evangeline Ramsey, the owner of the London List, leads Imaculata to confide the devastating reason behind her behavior, Evangeline helps her disappear from London and the danger that lurks there by providing a disguise, a new name and a housekeeping position deep in rural Wales.

Arriving in Wales with the fervent hope that her new employer, a retired soldier, is too old and feeble to notice that she has neither housekeeping nor cooking experience, the newly-named Anne Mont, a plain, respectable widow, is surprised to discover that Major Gareth Ripton-Jones is neither old nor feeble.  He is, however, so drunk that he probably won't even notice she's there...or so she hopes.

Things aren't going well for our hero.  He returns home from a successful military career to discover his father has mismanaged the family estate to the brink of bankruptcy.  Then he's seriously injured by a fall off a tenant's roof and the woman he loves dumps him for greener pastures when the fall results in the loss of his arm.  If that's not enough, when his former lover is found brutally murdered, all eyes turn to Gareth, the spurned fiance, as the most likely suspect.  Perhaps he can be excused for seeking oblivion in the bottom of a bottle.  But not for long...

When Anne learns of Gareth's financial situation she proposes a solution to both their problems.  If they marry, she gains access to the fortune left to her by her mother.  Gareth can save the family lands and Anne can travel far, far away to a place where she can live an independent life and her powerful father will never find her. Gareth, who by now has sobered up enough to realize his new housekeeper is young and beautiful, has other ideas...ones that involve a marriage in more than name only.  But someone is determined to keep that from happening.  Could Anne be destined for the same fate as Gareth's former love?  And even if she escapes that fate, will Gareth be strong enough to turn his life around and make himself into a man worthy of her love?  Then there's her father, a man with evil in his soul and his daughter in his sights...

Considering the subject matter, this book could easily have turned into a heavy, angst-ridden story - the kind I struggle to finish - but Robinson's skill kept that from happening.  By infusing humor, sharp dialogue, snappy banter and a heroine with a rapier tongue and a surprising amount of adaptability and determination, Lady Anne's Lover was transformed into an enjoyable story that kept me entertained from beginning to end while still retaining the emotional strength that the journey demands.  The villain of the piece is rather easily identified but that didn't detract from my pleasure in the story.

Another aspect of the story that I enjoyed was the realistic pacing of the novel.  No easy fixes here.  Both Anne and Gareth require time, introspection and growth before opening their hearts to one another and I'm happy Robinson gives them that time.  Watching Anne confront her tormentor at the end of the book - with Gareth by her side but with the strength to stand on her own - brings the story, and the London List trilogy, to a most satisfying conclusion.

If you enjoy books filled with heat, heart and humor then give Maggie Robinson's London List trilogy a try.

The hero of Lady Anne's Lover faces the very difficult challenge of conquering alcoholism while the heroine has been subjected to abuse by a parent.  Have you read any other historical romances that feature characters facing these challenges?  Any books that you would recommend?  If you haven't read any books of this type, tell me about what you've read lately or are reading now.

One randomly chosen person leaving a comment will receive a signed copy of Lady Anne's Lover.
(U.S. and Canadian addresses only)