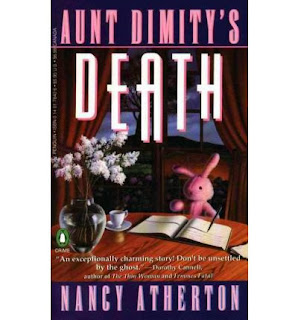 It's a while since I talked about a mystery series here - and I've got a beauty for you today.

As many of you know, I've picked up so many recommendations for great books from the regulars here at the Dishes. A few months ago, Janga mentioned a cozy mystery series by Nancy Atherton based around a ghost called Aunt Dimity. As a diehard ghost story fan, this sounded right up my alley, so I ordered the first one.  I've since read 10! That's probably enough to indicate that I really enjoy these and I'd recommend them highly!

These books are so cozy, they practically make you hot chocolate and knit you socks. Seriously! Even the bad guys aren't particularly bad and if you're a devotee of blood and guts and loving descriptions of people eviscerating one another, these aren't for you. However, if you love charming characters, romantic subplots, chocolate box England (I hate to admit it, but I'm a sucker for chocolate box England!), lovely humor and an affirmation of the good things in life, I'd strongly advise picking up an Aunt Dimity mystery after you've made yourself a pot of tea. For these books, coffee just doesn't cut the mustard. And if you can manage an Eccles cake or a cucumber sandwich with that tea, you're right in the ballpark! 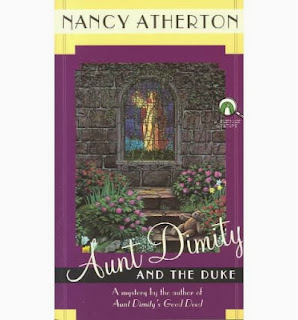 I've had the sort of year where every time I knock one task on the head, another hundred spring up to taunt me. In that sort of stressed frame of mind, these comforting, warm-hearted, positive books are just the ticket. They're short - about the length of a category romance - and like a good romance, you just know everything is going to turn out right in the end.

One proviso, I'd recommend reading the books in order. The cast of characters grows like Topsy so it's nice to see the relationships develop from book to book.

The first book AUNT DIMITY'S DEATH introduces the series' major character. American antiquarian book expert Lori Shepherd has just lost her beloved mother when she discovers that the Aunt Dimity who featured in childhood stories was a real Englishwoman who has left her a fortune.

I adored this story about second chances and the power of love and making reparations for old tragedies. There's also a lovely romance for Lori and we come to love Dimity who manifests through a blue journal and her various stuffed animal cohorts (told you this was on the sweet end of things, didn't I?). I found this a really moving story, despite all the humor and the happy ending. In the last chapter, I was crying like a drainpipe in a downpour. 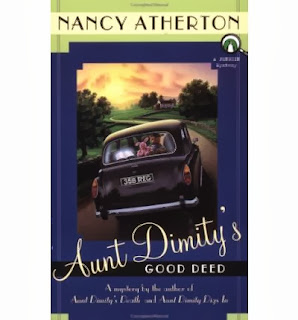 The second book is actually my favorite in the series - which is odd because it's not very much like the others. So far nine out of the ten books have been told from Lori's point of view in first person. AUNT DIMITY AND THE DUKE is a third person romance featuring lonely computer whizz Emma Porter, aided by Aunt Dimity and some stunning Cornish scenery. I particularly loved the characters in this one and most of them turn up as regulars in future stories.

The third book, AUNT DIMITY'S GOOD DEED, returns to the pattern of the first. Lori tells the story - and has a fairly innocent flirtation with a handsome man while she's disgruntled about the state of her marriage (don't worry - everything works out right in the end!). Lori's flirtations become a constant - it's like having a romantic plot while not having one, if you know what I mean. And all the books include romantic plots for secondary characters. Weddings reign supreme in Aunt Dimity World! 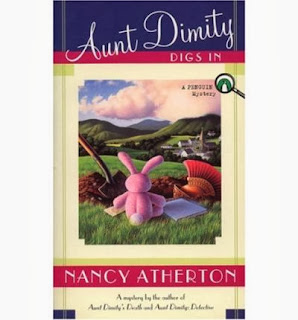 Book 4, AUNT DIMITY DIGS IN, features an archeological setting - I love those so this one really made me smile. There's also a wonderful message about overcoming prejudice and the bitterness of the past.

By this stage of the series, we have well established principal characters, a fun ghost, a fun pink rabbit avatar, and a wonderful English village full of eccentrics who come and go in the stories. Also by this stage, I was well and truly hooked. I'm writing this review a couple of months ahead of time, but my addiction to the series is ongoing. I have three more waiting for me as part of my Christmas reading binge. These lovely books with their message of love conquering all and forgiveness for past wrongs are just the things for the Holiday season!

So do you like mysteries? Do you like yours sweet and smiling or hard-edged and scary? Any favorite mysteries for me to read once I get to the end of the Aunt Dimitys?
Posted by Anna Campbell at 12:00 AM