Review - - Between the Devil and Ian Eversea 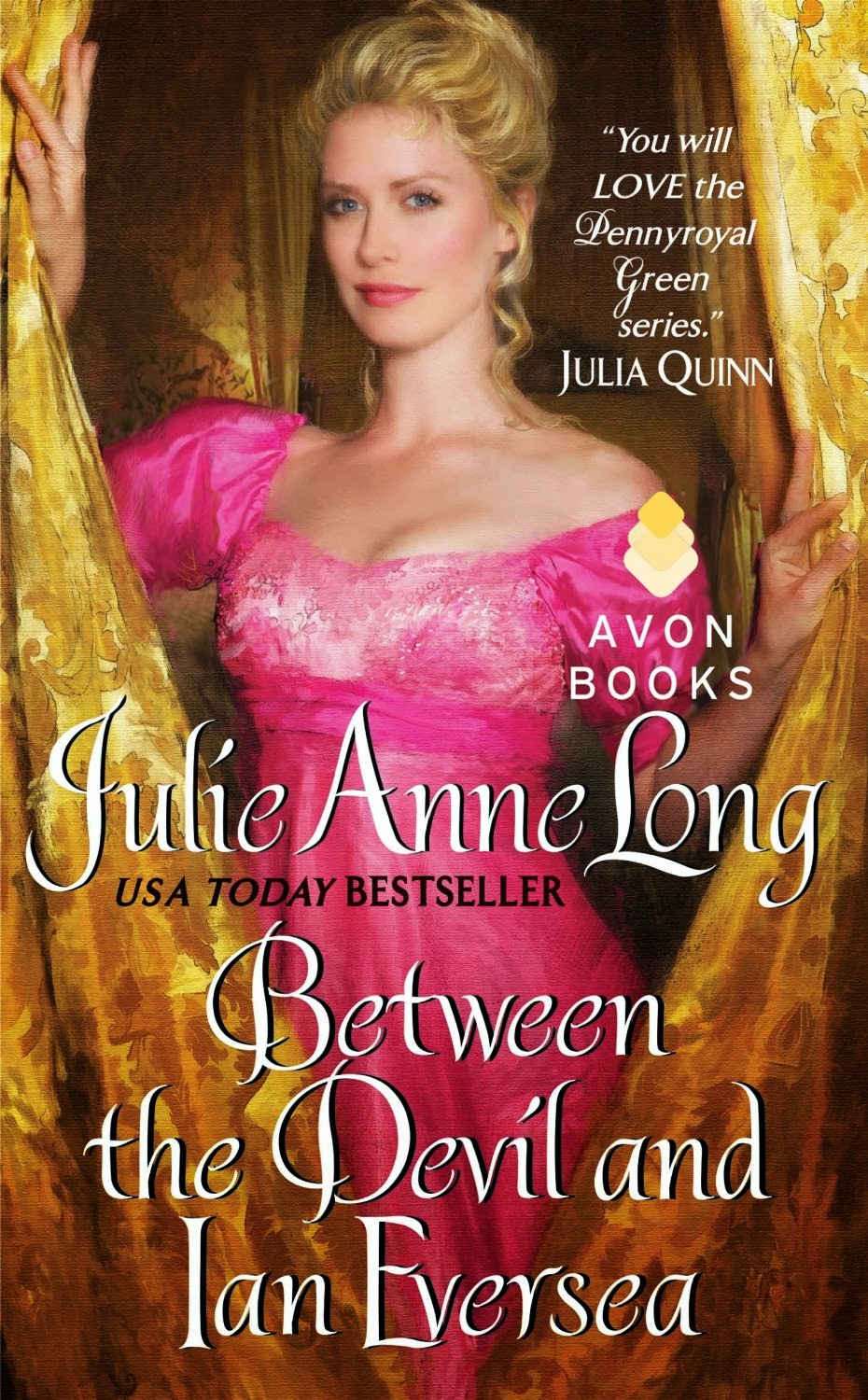 I have a little fantasy that Julie Anne Long and I are BFFs and whenever I read her books, I can just text message her, go “Pg 241, Tourette’s! Brilliant!” and she won’t have a restraining order issued to me. I’m not sure why this is. I’ve never met Julie. I’m not even really comfortable calling her Julie because, you know, we’ve never met. I mean, when you meet the Queen, you don’t make the peace sign and go, “Hey Bets, how’s it hanging?” There’s a protocol to be observed.

However, I think it’s the friendliness of the Pennyroyal Green characters that inspire this instant affection. Much like I was to the Harry Potter phenomenon (and I want to text JK Rowling frequently too), I was a late comer to Julie’s books. I recall protesting reading the book I started on because “Seriously, how many dukes can there be in the Regency period? Anything but a duke, please.” Then I read the book and I was all, “Anything for a duke.”

Falconbridge was the perfect duke: tired, Luciferian, and imperious. He had the most proper motivation: revenge against an obnoxious git named Ian Eversea who was caught in bed with Falconbridge’s fiancée. Suffice it that Falconbridge decided on some very ungentlemanly revenge by ruining Ian’s sister…and well, now Ian is the running joke in his family about his “climbing” skills. It all worked out in the end; but you could say it’s still a bit awkward at family holiday dinners between Falconbridge and his brother-in-law. Falconbridge is looking forward to the day that Ian takes a slow boat to China and hopefully doesn’t return. So is Ian.

However, before Falconbridge can enjoy himself, he needs to make sure his new ward, Miss Titania “Tansy” Danforth, is married and settled. Tansy was born in England, raised in America, and is now the only one left in her family. It is important to her to find a place for herself, to make a family, and to live fully. She knows the requirements for her future husband: very titled and very rich. She’s going to do it, and as beautiful as she is, it soon becomes apparent she’s going to have her pick, but the fly in the ointment to this little Machiavellian plan is that, well, she meets Ian Eversea and falls head over heels for him. And besides not meeting the minimum criteria, he’s still on Falconbridge’s blacklist. Not that Ian, of course, is remotely interested in marriage.

What’s amusing is a string of scenes where Titania is with her suitors, and her suitors are dancing a merry pace around her. In fact there are suitors who actually belong to other characters, and even one of the Eversea husbands loses his head for a half-second before smartly returning to his wife’s side—Titania just seems to have that effect. Ian can see she’s obviously pretty of course, but she’s so awkward…and she tries way too hard. Whatever her appeal is, he’s immune to it. At least at first.

What’s sweet and poignant is the string of scenes where Titania and Ian are together, and Titania ends up revealing the loneliness in Ian. Why does Ian act like an ass who goes around seducing women he has no right to be pursuing in the first place? Titania and Ian are both attention seekers, but it seems most of the time, the attention seeking doesn’t pan out how they quite wanted, yet they don’t know how else to be either. It’s like they both try too hard at all the wrong things.

One moment I was laughing hysterically, wanting to text BFF Julie about her brilliant scene or snippet of dialogue; and the next I was weepy and wanting to text her, “You’re destroying me!” And there was a dark black moment…I was concerned because the blacker the scene, the bigger the grovel needs to happen.

Oh, the Grovel. This is the Grovel of Grovels. There’s drama, there’s sweetness, there’s justice. Sweet, sweet justice for Falconbridge that someone, finally, has put Ian in his place and there’s the little fact that now he’ll owe Falconbridge for the rest of his life. It’s heartwarming. It’s possibly the first Pennyroyal Green book I’ve read in a while in which I didn’t immediately froth to hear about Lyon and Olivia, who better work out, I’m just saying, Bestie! I just wanted to reread all the books and read Ian’s comeuppance again and just revel. Looking forward to the sequel. Best historical series in a long, long time. Don’t miss a single one.