Spotlight on Confessions of a Royal Bridegroom


Have you met Vanessa Kelly's Renegade Royals?  Kelly kicked things off in November with the superb prequel novella, Lost in a Royal Kiss.  That was followed by the first full-length book in the series, Secrets for Seducing a Royal Bodyguard (read my review here).  Next up is Confessions of a Royal Bridegroom, scheduled to be released on April 1st.  Today, we are delighted to not only bring you a sneak-peek excerpt of Confessions but are also giving away an ARC of the book! 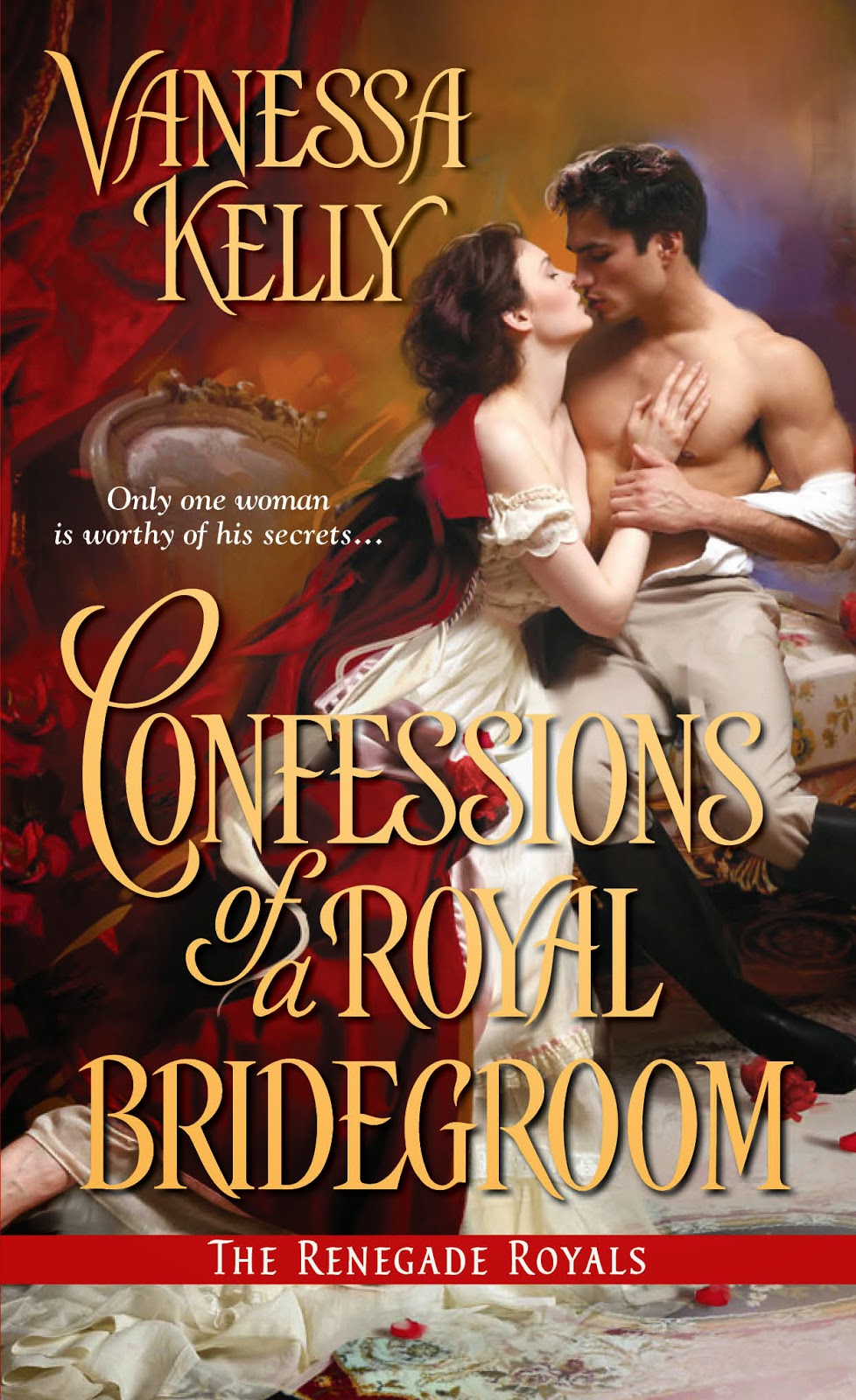 ONLY ONE WOMAN IS WORTHY OF HIS SECRETS...

Some men are born into scandal. Others pursue it with a passion. Griffin Steele, secret son of the Duke of Cumberland, is guilty on both counts. Yet somehow London’s most notorious scoundrel has been saddled with an abandoned baby boy—and with the unflappable, intriguing spinster summoned to nurse him…

Justine Brightmore may be a viscount’s niece, but she’s also a spy’s daughter, determined to safeguard the infant when his suspected royal parentage makes him a target. Yet how to protect herself from the rakish Griffin? Marriage might shield her reputation, but it can only imperil her heart, especially with a groom intent on delicious seduction…

As Mr. Steele strolled leisurely forward, Justine tried not to stare.  She failed miserably, but since the man was eyeing her without the least attempt to veil his curiosity, she decided she might as well return the favor.

Although not as tall or as broad as Dominic, Steele conveyed a sense of presence that dominated the room—and considering the riot of colors and textures in the drawing room that was quite a remarkable feat.  He was dressed in black breeches, highly polished boots, and a black coat and waistcoat.  The dark garb was relieved only by the white linen of his shirt.  Justine’s pulses jumped when she realized he wasn’t wearing a proper cravat, only a white cloth tied casually around his throat.  She couldn’t recall the last time she’d seen a gentleman without proper neckwear, not even on her uncle’s estate in the country, where she often spent the summer months.

His features were aristocratic and arrogantly handsome, with an expressive, well-shaped mouth, high cheekbones, and a sharply cut, determined jaw.  For all those sharp angles, however, there was something rather sleek about him.  In fact, he moved with a lithe grace that put her in mind of a cat.  A black and rather feral cat, quite evidently up to no good.

But it was his hair, gleaming blue-black like a raven’s wing, which made her blink.  Swept back from a widow’s peak, it was long, flowing down to his back, and pulled into a semblance of order by a narrow leather band.  With his black garb and leather boots it gave him the appearance of a buccaneer from another century.  That impression was enhanced by a thin, faint scar running down from his left temple to below his cheekbone.

Griffin Steele looked altogether exotic and disreputable, and he set her teeth on edge the closer he got to her.  One would have to be blind not to perceive the sense of danger inherent in the man, and Justine was far from blind.

Steele was judging her, too.  From the surprised lift of his eyebrows and the slight, sneering curl of his mouth, he was as little impressed with her as she was with him.

Dominic came to his feet with what Justine could swear was a slightly taunting smile.  “Ah, Griffin, there you are.  Allow me to introduce Miss Justine Brightmore.  She’ll be looking after Stephen for the next while.  I’m sure the two of you will get along splendidly.”

She filed that knowledge away and dipped into a respectful curtsy.  Her host might be a reprobate and a rake, but that was no excuse for poor manners.  “Good morning, sir.  It’s a pleasure to meet you.”

His dark brows arched with an elegant disdain she suspected was the habitual response to situations not to his liking.

“Permit me to express my doubt on that score, Miss Brightmore,” he drawled.  “Not that I can entirely blame you, given the circumstances.”

Even as she struggled not to bristle, she couldn’t help noting that although his voice hinted at the roughness of a street brawler, he spoke in cultured tones.  That first element didn’t surprise her, but the last did.  It warned her to beware of making quick assumptions about him.

Before she could make any kind of appropriate response, Steele turned his disgust on Dominic.  “Good God, what have you done?  You’ve brought me a lady, one barely out of the schoolroom.  Have you gone mad?”

“Hardly just out of the schoolroom,” Dominic replied, resuming his seat.  “Justine is entirely capable of doing what is required here.”  He nodded at her.  “Is that not correct, my dear?”

She also sat, smoothing her gloved hands down over the skirts of her mustard-colored pelisse.  “I must believe so, Uncle Dominic, or you would not have asked me.”  She couldn’t refrain from giving Steele a challenging look.  “And for your information, sir, I am four and twenty.  Well past the age of the schoolroom, to be sure.”

He stared back at her, sucking in an audible hiss of air.  “Dominic, you brought you own niece to do this?”  He looked genuinely horrified, but then a puzzled frown marked his brow.  “I didn’t even know you had a niece, or any surviving family, for that matter.”

Dominic watched Steele with calculating interest.  He obviously had some deep plan, one that eluded her at the moment but which obviously involved Steele and possibly her, too.  Dominic had told Justine that he hadn’t been able to find anyone else to care for the infant—at least not anyone he could trust.  The few female agents that could take on this sort of task were all unavailable.  Not that Justine was one of his agents—anything but.  Still, Dominic knew he could trust her, and from what he’d told her about the situation, trust and discretion were of primary importance.

But her instincts, finely honed after years of living with her father, pricked themselves to alert.  Dominic was up to something, and Justine needed to factor that into her dealings with both him and Steele.

“Justine is not my niece.  She is my godchild,” Dominic replied.  “Her father was Edward Brightmore.”

Steele’s dark gaze flickered back to her as he took the matching armchair next to Dominic’s.  He subsided with a negligent but elegant sprawl of limbs as he continued to study her.

“Ned Brightmore?  He died a few years ago at Salamanca, did he not?”

When Justine nodded, she thought she detected sympathy in his gaze.

“My condolences, Miss Brightmore.  He seemed to be a good man.  Certainly better than most of the men of his class who walk through my doors.”

“You knew my father?” she asked with an eagerness that surprised her.  She usually avoided talking about Papa.  It was still too raw a wound to probe.

“You’ll find that Griffin knows most everyone in London,” Dominic responded.

“Yes, and most of them have been more than willing to allow me to fleece them, for which I am profoundly grateful,” Steele said in an acid tone.

Justine was trying to decide whether to be horrified or not at the idea that her father had sampled the dubious delights of Steele’s gaming clubs and brothels when the arrival of the tea tray spared her the choice.  As far as she knew, Papa had never gambled.  And if he had visited the brothel next door, she did not want to hear about it.

Do you like sneak peeks?  Do they ramp up the excitement level for you or are you one of those people who doesn't want to read any part of the story until you have the entire book in hand?

Are you anticipating Griffin's story as much as I am?

One randomly chosen person leaving a comment on today's blog will receive a print advance reader copy of Confessions of a Royal Bridegroom.  Deadline for comments is 11:59 PM (EST), Tuesday, March 4th.  (U.S. / Canadian addresses only) 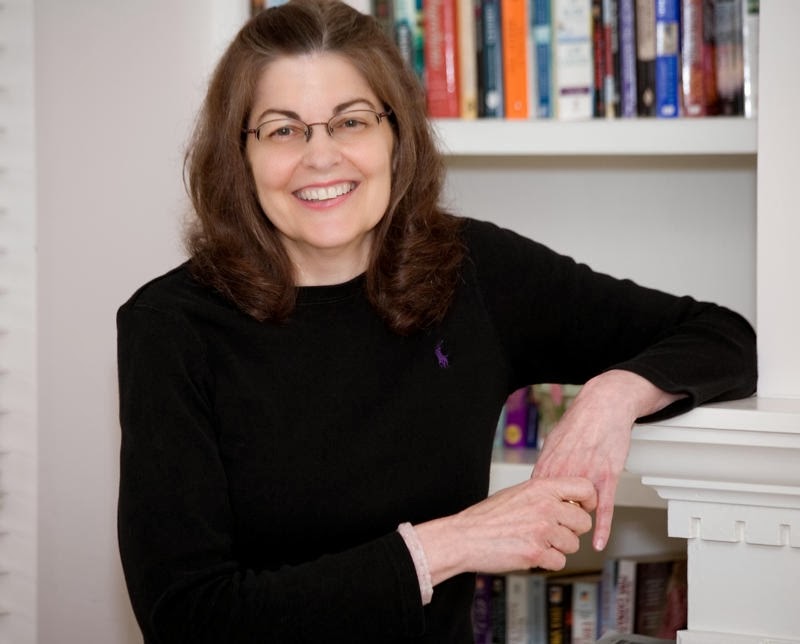 Vanessa Kelly is a best-selling author who was named by Booklist, the review journal of the American Library Association, as one of the "New Stars of Historical Romance." Her sensual, Regency-set historical romances have been nominated for awards in a number of contests, and her second book, Sex and The Single Earl, won the prestigious Maggie Medallion for Best Historical Romance. Secrets for Seducing a Royal Bodyguard, the first book in her new Renegade Royals series, received a starred review from Publishers Weekly and spent several weeks on BookScan’s romance bestseller list.