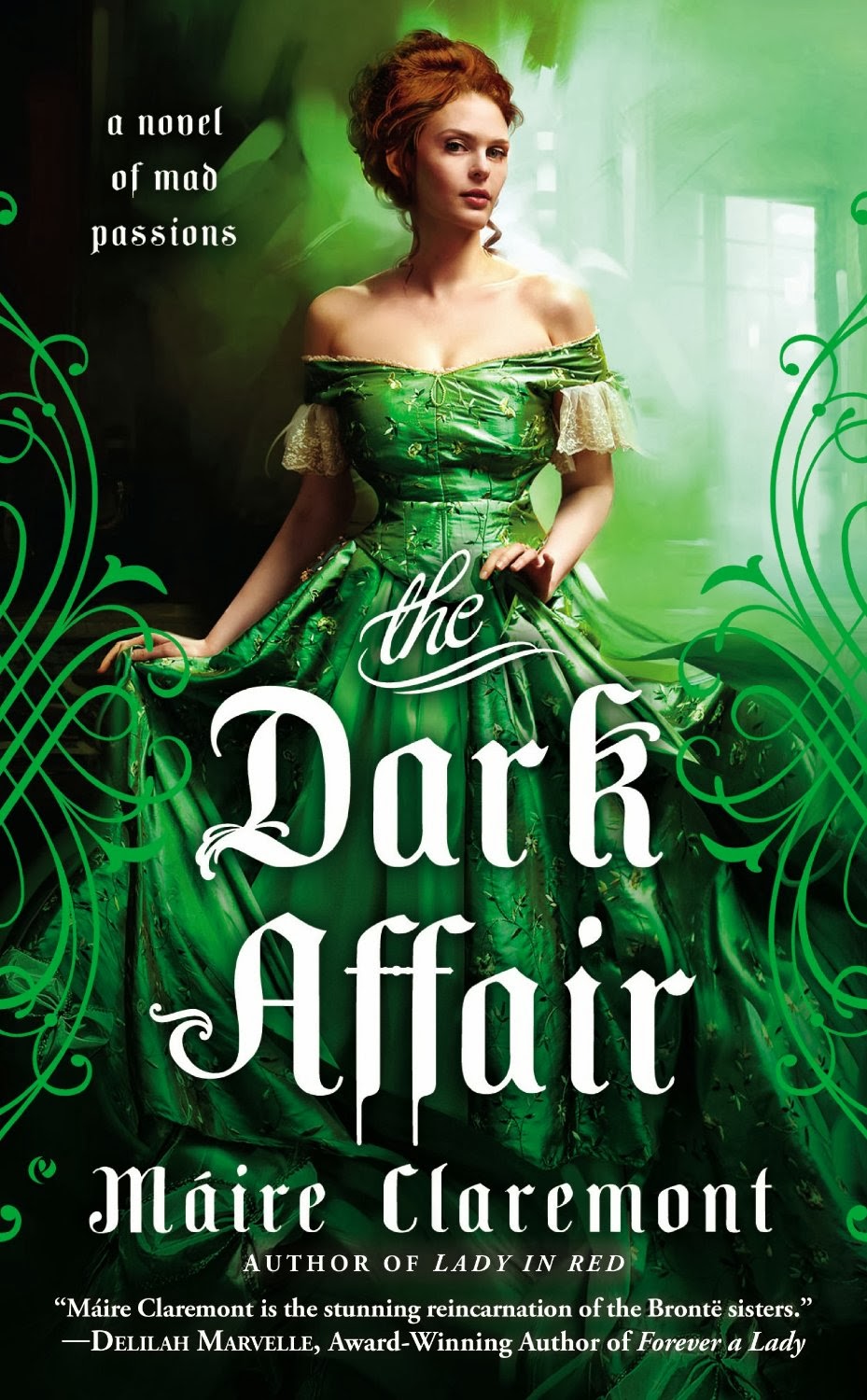 I know two things: Máire Claremont is the great-great-great-great-great grandchild of Emily Bronte, who I realize was never married, but in romantic literature, easy to circumvent, and Máire Claremont is romantic. Talk about an author who believes in love conquering all, including but not limited to opium addiction. She must be. Her writing is so beautiful and lyrical, only a Bronte could have written it, right? I am convinced.

The setting of The Dark Affair, much like its predecessors, is wonderfully Victorian goth, dark and gloomy, with grim settings in asylums and harsh treatments and constant near threat of being locked away forever if you act out of line. You know how some romantic novels make you think you could go back in time and live in that setting with no worry? Not in a Máire Claremont setting. It’s cold. It’s stark. Many times it’s loveless. It’s desperate and it’s always, always on the edge of falling into something worse. But you don’t mind because the dialogue is so beautiful and authentic, you feel you’re watching a BBC drama that makes Downton Abbey look anachronistic and fluffy.

How can you not root for these characters? The Irish Catholic heroine who is so poor she only wishes she had two half-pennies to rub together and the mad viscount addicted to opium and grieving for his dead wife and daughter. The heroine is known for her ability to help addicts—a stretch historically, perhaps, but brilliant anyway—and the viscount’s father contacts her to help his son, who has been locked into an asylum. You know, BY the father. You couldn’t pair a more unlikely duo.

The heroine, Margaret Cassidy, has a bit of a savior complex. She’s got the family that falls apart; and she at such a young age is left to pick up the pieces and hold everything together. That’s what she does, all day long, holds it together. The viscount’s father—who you may have guessed can be a bit heartless—wants Margaret to marry his son, as protection if/when the father dies to help keep his son out of the asylum. She does not immediately embrace this clause, but a few ghosts from her past—namely a dear brother who is trying to join up with the Fenians—encourage her to accept this proposal in order to save her family.

The hero, Viscount Powers, definitely has the tragic, romantic hero down pat. He doesn’t really care if he lives or dies, and he’s really leaning toward the latter, though he’s not so mad as to throw himself in front of a carriage of horses or anything. He spends most of his time trying to numb the pain of his loss with laudanum, which ends up making him do some crazy things, and ended up getting him tossed into the asylum. He’s so addicted that the only way to control him is to tie him to the bed and then shoot him with morphine, which happens to be another form of opium. Don’t you love the Victorian age? Combating fire with fire? With doctors like these, who needs a flu epidemic, am I right?

Once Viscount Powers is taken back home, Margaret goes through the unenviable process of detoxing him, all the while getting helpful asides from his father that says, “I want him to act normal. If he starts acting crazy, I’ll know I should never have asked a woman to help and I’ll get rid of you and hire male doctors instead.” He’s a keeper. Normally Margaret would suggest gradual detoxification, but heroes are heroes, and they always go cold turkey or else. You feel you’re getting detoxed right along side him; and you’re tempted to tell your own doctors to never prescribe any codeine, just in case. It’s just not worth it.

Through some trial and error, and a Black Moment where you wonder if the hero will succumb again to his past addictions, love finally does conquer all; and Máire does do her best to tie up a grim gothic book by showing us how Powers and Margaret keep their Happy For Now ending going by a sort of Addict’s Anonymous type of counseling and day-by-day approach. You know the hero doesn’t slip, but she is clear that the struggle is still there, as any true addiction would be.

Kudos to Ms. Claremont for tackling such gritty, tough subjects like addiction, mental health, and health care in the Victorian age. Those topics would be a hard-sell most of the time anyway, but she does make the characters, while flawed, very likable and worthy of our sympathy. I also do have an interest and curiosity about asylums and all the other grim topics that go with such a place, so I found the topic quite diverting from the typical historical romance which is more romp than reality.

However, right in the middle of me reading this book, Phillip Seymour Hoffman died, which is no fault whatsoever of Ms. Claremont, but is living proof that the reality is much more than a romantic story where love always triumphs. You never really cure addiction; you just live with it, much like you would with any mental illness. So while I admired Máire’s epilogue that alludes to the fact that Powers continued to go to his “meetings”, continued to struggle, but also continued to overcome with the help of loved ones who supported him, at the same time, it felt a bit rushed and a little too neat. Still, how can you not root for that kind of story?

If you liked the story of Walk the Line, about Johnny and June Carter Cash, I would say this falls into similar territory, at least the hero struggles constantly with addiction, his relationship with his father, and trying to be the man he knows he should be, could be. It is one of my favorite movies and I’ve watched it many times. I read The Dark Affair with the same sort of intensity, wondering how it would all work out, but it surely would. However, in Walk the Line, we all know that movie cut off at a point where Johnny Cash conquered his addiction for a time but later struggled with reconquering it over and over again, with the love and help of one woman.

Four stars. Although this book has setting, voice, intensity, and character to an art form, and you will likely be as immersed as I was in the gothic world, I am deducting a point because curing his addiction and him managing to avoid a relapse seemed a bit too “easy” and took me out of the story as I questioned if that could be remotely possible. Sure, an English lord willingly marrying an Irish Catholic? No big deal. But detoxing and side-stepping a relapse with the kind of surety of one avoiding only one pothole in a road? Now we’re stretching credibility for me.


I am tempted to read the previous books now—the voice is quite engaging—and I think Máire Claremont certainly fills a void for those of us missing the grittier, darker, more passionate kinds of stories. I will definitely look for her next book.

Hellie Sinclair (a.k.a. Fran) was one of the founding members of the Romance Writer's Revenge, where she frequently got to satisfy her love of good books and her need to expound by writing reviews. Hellie loves to craft on projects she rarely finishes, watch British dramas as a sort of Olympic marathon event, and do most anything that fits the description "indolent and pleasurable." Fortunately reading falls into that category. You can find her at her blog, where she writes the occasional review...and shares updates on her never-ending projects.
Posted by pjpuppymom at 12:00 AM