Out of Bounds—Book 2
By Tracy Solheim
Publisher: Berkley Sensation
Release Date: May 6, 2014 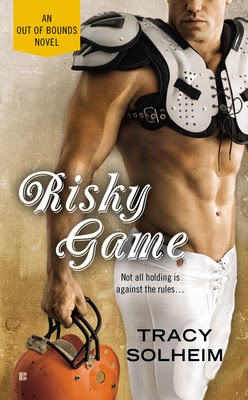 By the look of things, football star Brody Janik has it all. He is the star tight end for the champion Baltimore Blaze. He is wealthy and gorgeous, and has women practically throwing themselves at him. But, he’s hiding a secret that could put his career in jeopardy.


Enter Shay Everett. She is an intern working within the training department in the Blaze organization. She is working toward her PhD in nutrition at Johns Hopkins and needs the internship for college credit. Shay works several jobs to pay for college and lives a very frugal life. When she overhears Brody’s health concerns, she is almost tempted to sell it to a popular online gossip blogger who specializes in publishing secrets of NFL players (including several Blaze players). She lets it slip to Brody that she knows and he is furious. This leads him to believe she is a snitch.


Shay doesn’t want Brody to ruin her possibility of earning her degree and he doesn’t want anyone finding out his secret . . . so they strike a deal. He won’t tell on her and she will help him with his nutrition regimen. Brody adheres to the motto “keep your friends close and your enemies closer” and decides to do just that with Shay. To keep her close, Brody suggests they act as boyfriend and girlfriend. Shay‘s not onboard with the idea but doesn’t have much choice after he kisses her in public. They go through with the charade, but how long will it last?


Tracy Solheim is a new-to-me author and I really enjoyed Risky Game. It is part of a series, but that didn’t affect my reading of this book whatsoever. In fact, it made me want to read the other books in the series! This is great because I seem to be reading a lot of sports-themed books lately and must admit that football is my favorite. *g*


Brody is a simply wonderful hero. You’d think that because he is a huge football star he would be arrogant and egotistical, but he’s not. He is confident, and there is a difference. Plus, he loves his family and is very respectful of his mother and sisters. Lately, Brody has found himself wanting the happiness his married teammates enjoy in their relationships. He wants to find someone who wants him for him and not his star status. When he meets Shay, he doesn’t know what to think at first. He is drawn to her and sees her as a conundrum, and as Brody puts it, he is “fascinated by conundrums.” Shay, on the other hand, hasn’t had it as easy as Brody has. She has a twin sister (Teryn, who is a cheerleader for a pro team) that others say got all the looks while Shay got all the brains. Everything came easy to Teryn, but Shay has always had to work her butt off for what she wanted. She is such a genuine, relatable character and I love that about her. She’s the type of heroine you want for a friend and the type that you can’t help but root for. I enjoyed watching as Brody slowly brought her out of her shell.


Risky Game is an absolutely delightful contemporary romance that I definitely recommend. And don’t worry . . . even if you aren’t a fan of sports, you will enjoy this one. I can’t wait for Ms. Solheim’s next book, but in the meantime, I’m going to check out her backlist.