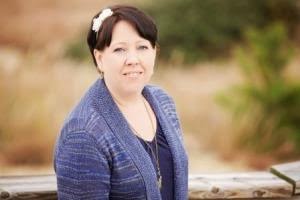 She's back!  One of our favorite new authors, Terri Osburn returns to the Dish today to blog about her new book, Home to Stay, third in her heartwarming Anchor Island contemporary romance series.  Although born in the Ohio Valley, Terri found her true home between the covers of her favorite books. Classics like The Wizard of Oz and Little Women filled her childhood, and the genre of romance beckoned during her teen years. In 2007, she decided to put pen to paper and write her own. Just five years later, she was named a 2012 finalist for the Romance Writers of America® Golden Heart® Award. You can learn more about Terri and her work by visiting her website at www.terriosburn.com.

Take it away, Terri!

Hot Stuff In The Kitchen

I am NOT a foodie. In fact, I rarely cook anything that doesn’t come out of a box. There are six or seven cookbooks on a bookshelf in my kitchen, but I never open them. Heck, I don’t even know what the word mince means.

And all of this could be a contributing factor for why I keep writing heroes who can cook. Normally, I’d say writers are not putting their own fantasies onto the page. In this case, that is exactly what I’m doing. But the odd thing is, I didn’t even realize I was doing it.

Back in olden days, when I first sat down to put fingers to keyboard (that sounds dirtier than intended – apologies), the hero who walked into my brain was a former Navy cook turned chef. As you can probably guess, my first thought was “What the fudge do I know about writing a chef?”

(Yes, I said fudge. That’s my story and I’m sticking to it.) 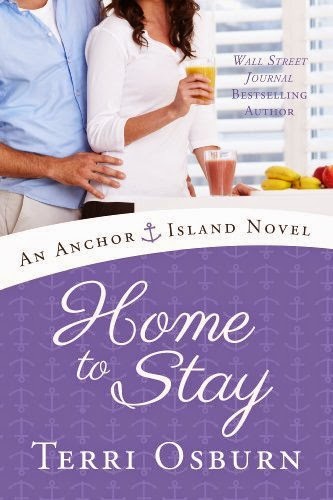 Poor Bryan never did get his happily ever after, and I’ve yet to write a chef hero, but of the three heroes in the Anchor Island series so far, two of them are really good cooks. Ironically, my heroines rarely cook, but they do spend a lot of time at the sweet shop on the island, partaking of their favorite desserts.

So basically, through my highly-skilled-in-the-kitchen heroes, I’ve realized that I am indeed putting my own fantasies into my books. As for my heroines, well, that’s more my reality.

And speaking of my cooking heroes, the next book in the Anchor Island Series, HOME TO STAY, goes on sale in all formats on May 1. Very soon you’ll get to read about Randy Navarro, my vegetarian, green tea drinking, adrenaline junkie, giant Teddy Bear of a man who makes a killer fettuccini alfredo for his heroine, Willow Parsons.

Here’s the blurb for the book:

Willow Parsons’s two new best friends are getting married, putting her squarely on the sidelines of romance—which suits her just fine. After escaping the ultimate Mr. Wrong, she is more than happy to spend her days slinging drinks in Dempsey’s Bar & Grill, and her nights alone. But her Anchor Island refuge has just one catch: muscle-bound charmer Randy Navarro.

Everyone in town knows that Randy, owner of the local fitness club, is a giant teddy bear. Everyone, it seems, except for Willow. He’s convinced that her avoidance is more than just playing hard to get, and is determined to uncover the secrets that keep her on edge. But when old fears are dragged into the light, can Randy get Willow to stay and fight for their love…or will she take flight, leaving both him and Anchor Island behind?

Home to Stay is a charming, romantic tale about following your heart to find where you belong.

So what about you? Good cook? Non-cook like me? Do you like a hero with solid kitchen skills? Know one in real life? Got a favorite from a book? Starving minds want to know!

One lucky commenter today will win a signed copy of HOME TO STAY along with some fun book swag. (US & Canada only.)