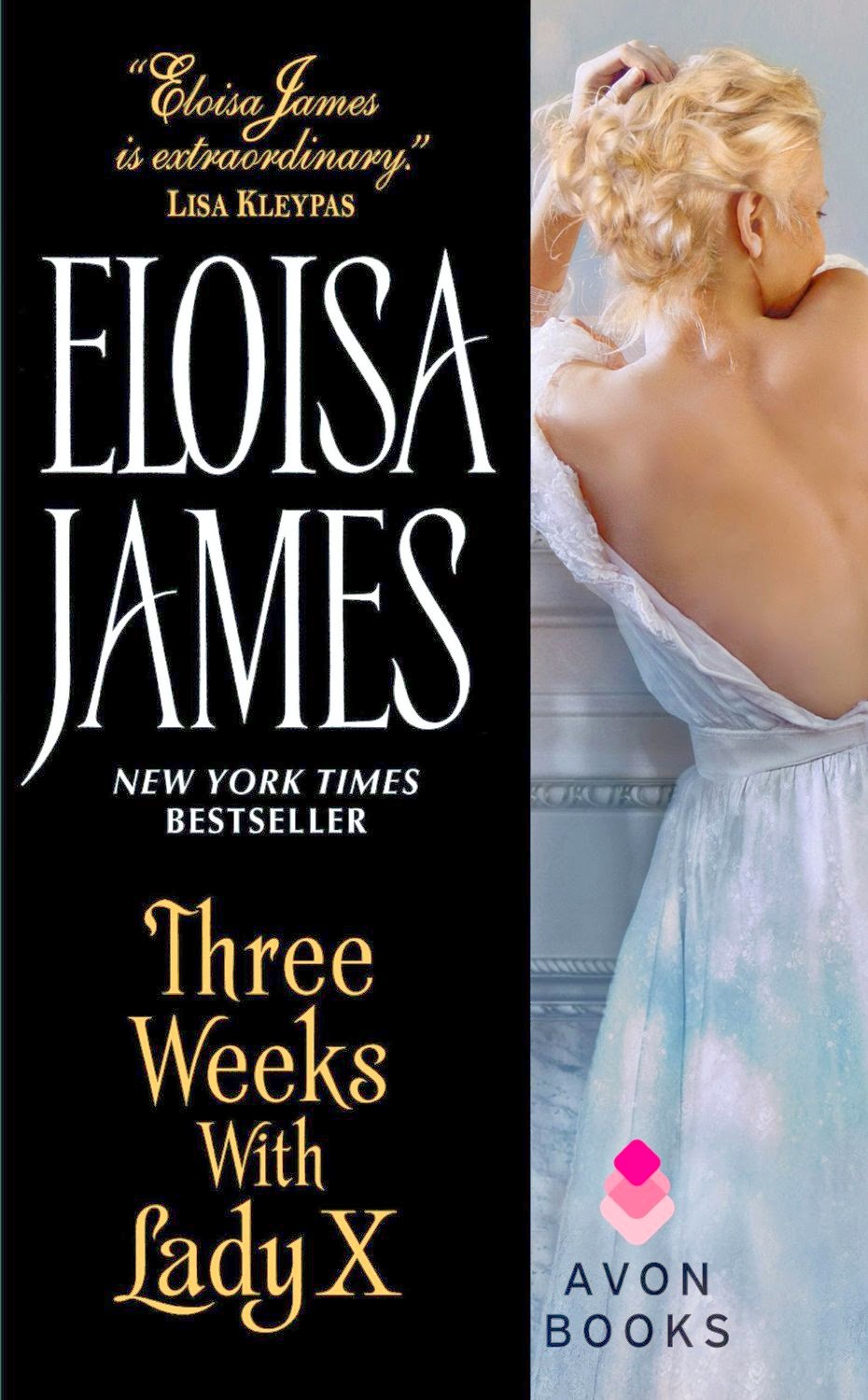 Some books, I like.  Others, I love. Then there are those – the rare few – that touch something deep in my soul, causing the characters and their story to linger in my heart and my mind for weeks, sometimes months…or even longer.  What causes a certain book to speak to me in such a manner?  A character who overcomes seemingly insurmountable challenges?  A couple finding deep, abiding love, despite the odds, at times when one or both aren’t even aware of the fact that love is something for which they yearn?  Could it be the author’s command of language, the ability to ‘draw a picture’ with her words that pulls the reader into the story, offering them the opportunity to travel the story’s path at the side of the characters?  Perhaps it’s all of the above – that rare confluence of attributes that come together to create one very special book.  Three Weeks with Lady X is one such book.

The bastard son of the Duke of Villiers, Tobias “Thorn” Dautry is one of the richest and most powerful businessmen in England and part of a loving and supportive family.  But that wasn’t always the case and the young boy forced into a horrible life as a mudlark, risking his life diving for bits of treasure in the Thames, still lives deep within the man.  When Thorn decides to marry – he loves children and wants some of his own – he approaches it as he would any business deal, selecting a sweet and lovely young woman from a socially prominent family who will give him children that will be accepted by London society.  It matters not that the young woman is considered simple by the ton or that she rarely speaks in his presence.  His only interest is bedding her and leaving her in the country to care for his children.  He seeks a serene life and has no interest in a woman who will challenge him.  His best friend warns he will be bored to tears but Thorn is set on his course and nothing will change his mind.  Before he can ask for the young woman’s hand however, he must win the approval of her harridan of a mother and to do that he needs his newly purchased country estate restored to ton standards.  His stepmother encourages him to engage the services of the incomparable Lady Xenobia India St. Clair, a woman who is decidedly not simple, makes far too many demands and ruffles his brawny feathers at every opportunity.

India St. Clair may be the daughter of a marquess but she has not known a life of luxury and leisure.  Her parents were what could be kindly called “free spirits,” absorbed in one another and frequently leaving their young daughter to fend for herself.  Orphaned at age fifteen and left with nothing, India swore she would never be penniless, hungry or dependent upon another person again.  Now, at age twenty six, she’s the most sought after decorator in England, independently wealthy and, after declining numerous marriage proposals, ready to finally set her career aside and choose a husband.  It is only for her friend, Eleanor, the Duchess of Villiers, that she agrees to help Eleanor’s step-son, Thorn - an agreement she regrets from the moment they meet.  This is no easily managed man.  The too big, too muscular, much too intelligent Thorn has her every nerve ending bristling.

From the first moment these two meet, you know it’s going to be a wild ride.  It doesn’t take long for the reader to realize that these two characters are perfect for one another.  It takes them – especially Thorn - much longer to reach this realization and the hills and valleys of the road they must travel bring tears, laughter, soul-shattering heartbreak and, finally, the joy and heart-melting satisfaction of a love that is meant to be.  These are not simple characters.  They are both complex, layered individuals who have been shaped by the circumstances of their lives.  They are intelligent, hard-working, honorable and loyal to those they trust but that trust is not given easily.  There are tender, vulnerable parts of their souls that are well guarded and it is only when those walls are lowered that they will know true happiness.  The question is whether they will lower those walls before it’s too late.

Thorn and India’s story cannot be told without the richly drawn secondary characters that surround them.  There’s Rose, Thorn’s young ward who is wise beyond her years and whose presence allows us to see her guardian’s softer side.  Let me go on record right now saying I hope we will one day be able to read her story.  I appreciate the fact that Ms. James did not make Laeticia, Thorn’s prospective bride, either a throwaway character or the “evil” other woman.  She’s a sweet woman in an untenable situation, misunderstood by society and deserving of both the evolution we witness and a happy ending.  The Duke and Duchess of Villiers (hero and heroine of A DUKE OF HER OWN) make cameo appearances and while their roles aren’t large, they are pivotal.  Of course, any appearance by Villiers is a good one in my opinion!  Finally, there’s Vander – Evander Septimus Brody, future Duke of Pindar – Thorn’s best friend since their days at Eton.  A man with secrets in his past (and hints of a tormented childhood), Vander plays a critical role in this story.  I can’t say more than that without giving away spoilers but I will say that I want more of this character.  Much, much, more.  (Thankfully, I have learned that Ms. James is currently writing a book for Vander.  Color me a very happy reader!)

There is so much more I love about this book - such as the written notes that filled me with delight - but I'll stop now and let the readers who haven't read this book yet discover each delicious tidbit on their own.

I have a corner of my keeper bookcase filled with books that have touched me in an extraordinary way.  These are the books that I return to time and time again; stories of characters I can’t get enough of.  Books with writing that wrings my heart, tickles my funny bone and floods my soul with pleasure.  This is where THREE WEEKS WITH LADY X will reside…until I can’t resist its lure and once again immerse myself in the world of India and Thorn.