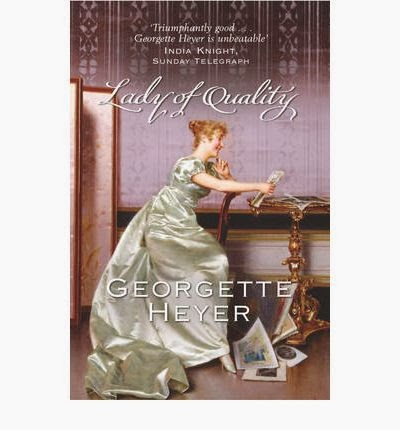 As regular visitors to Second Helping know, I'm gradually making my way through the works of Georgette Heyer.

Over my lovely quiet Christmas break, I managed another two on the list and loved both of them. And discovered that I hardly remembered these at all which was nice - the surprises written into the story were actually surprises!

I was chatting about LADY OF QUALITY with another Heyer fan as I was reading it and she made the comment that she thought the heroine was unsympathetic. I can't say I found Annis Wychwood unappealing. But then I don't mind managing females with sharp tongues! Annis is beautiful and rich and headstrong. At the age of 29, she's also convinced that she'll never marry - why should she submit her will to a man's whim? But fate has other plans when she becomes involved with Oliver Carleton, the "rudest man in London." I'm sure you can imagine how funny the encounters between these two straight talkers are. I laughed out loud so often when one or the other would get the final word in!

I also like stories about clever people who think they've got their lives sorted out until they fall in love and realize that they're as hopeless as the rest of us. And there's always a lovely pay-off in such stories when the couple come together, wiser, warmer, and willing to surrender to the demands of their hearts instead of their heads. LADY OF QUALITY is definitely a read of quality! 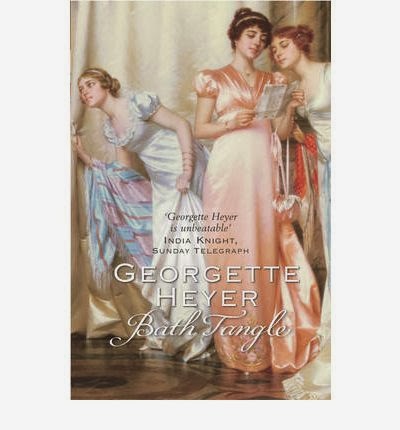 The second Heyer I read while the temperature outside hit boiling point (we had a heatwave this summer!) was BATH TANGLE.

It took me a little while to warm up to this one (despite the weather). At the start, there just seemed to be so many characters! And Lady Serena Carlow, another sharp-tongued, managing female, wasn't quite as appealing as Annis Wychwood, although they clearly came from the same branch of the Heyer heroine tree. Like Annis, she's rich, beautiful and independent, but she's also much more tempestuous and impulsive.

But of course, the whole point of a tangle is that things should be complicated enough to get into a real mess. And that's certainly true about this story. Once it gets going and the various characters start making absolutely wrong decisions, get set for great fun. And there are some marvelous secondary characters, including the vulgar but goodhearted Mrs. Floore and her vulgar but not goodhearted daughter Lady Laleham. Not to mention the usual selection of madcap young uns to push the plot along. And the ending is sigh-worthy satisfying - especially as there are moments during the story where you're not sure that things are going to work out as your romantic reader's heart would wish.

By chance, I picked up two stories that have an awful lot in common. Both are set largely in Bath. Both feature stroppy, opinionated heroines. The guys are difficult and smart, and up to the challenge of dealing with these wild women. There are runaway heiresses in both stories who stir much mayhem. Both are notable for sparkling dialogue that will have you giggling.

Have you read either of these? Do you like a feisty heroine? Is there a point at which the heroine becomes TOO feisty?
Posted by Anna Campbell at 12:00 AM