Adrenaline junkie, and acknowledged town mischief maker, Erin Watters has no interest in marriage.  After the college boyfriend she thought she would marry ripped her heart out and stomped on it, she tucked the vulnerable organ back into her chest and has guarded it closely. But while Erin may not want a lifetime commitment, after witnessing the happiness of her friends who have found the loves of their lives, Erin is warming to the idea of finding a boyfriend. Once her friends discover her change of mind, all bets are off or, rather, one bet is on.

If there's one thing hot rescue paramedic Troy Strieber dreads it's his turn to grocery shop for the station.  He's not too keen on helping Erin find a boyfriend either but for a two-month reprieve from grocery shopping he'll gladly sign up for wingman duty. After all, how hard could it be? Erin's hot, smart, nice.  If she didn't lead such a reckless lifestyle he'd go after her himself but that way lay tragedy and heartbreak.  He'd walked that path once and has no desire to do it again. Besides, he'd come back to Cascade to help his twin sister and young niece after his brother-in-law's unexpected death.  They were his first priority now.

Troy takes his wingman duties seriously.  He's determined to win this bet in record time so what's with these twinges of jealously that sneak up on him when Erin appears to hit it off with a guy? And why does Erin find herself comparing her boyfriend candidates to Troy and finding them lacking?  The more time these two spend together on the great boyfriend hunt, the more they like one another.  And the more they like one another, the more they open up and get to know each other below the surface level.  They're surprised by what they learn.  But will those parts that they normally keep hidden beneath the surface be enough to move a growing affection into a deeper emotion or will they be the evidence that proves they are each destined for love...with someone else.

This was my first Robin Bielman book and I thoroughly enjoyed it.  Her writing sparkles and the characters are realistic, likable and make me want to move to Cascade so I can hang out with them.  While there's plenty of humor in this story, there's also a satisfying depth of emotion. Troy's scenes with his niece are especially endearing.  Bielman also had the patience to move Troy and Erin's relationship at a believable pace and infused enough sexual tension into their relationship to leave me satisfied, even though the sexual heat level in the book is mild with any action taking place behind closed doors.

The second book in this series, Her Accidental Boyfriend is a 2014 RITA® finalist for Best Short Contemporary Romance.  I've downloaded it and am looking forward to a return trip to Cascade for both this story and the first one, Kissing the Maid of Honor.

So, tell me.  Do you like your romances mild or spicy?  Or, like me, do you enjoy a bit of both?  Have you read Robin Bielman's books yet?  What are you waiting for? 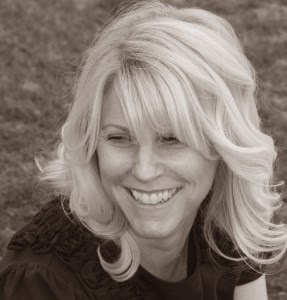 Robin Bielman is a contemporary and paranormal romance writer living in Southern California with her husband, two kids and - according to Robin - the "cutest mini Labradoodle in existence." The beach is her happy place but she has a longing to explore other places as well. When she's not writing, she can often be found reading other authors' books. (I'm sure we can all relate to that!)  Robin's 2013 book, Her Accidental Boyfriend was recently named as a 2014 RITA® finalist in the Short Contemporary Romance category.  Congratulations, Robin!

Robin's Secret Wishes series includes Kissing the Maid of Honor, RITA Finalist Her Accidental Boyfriend, and Wild About Her Wingman. In July, 2014 her first single title paranormal romance, Veiled Target, will be released. She loves to connect with readers. Learn more about Robin and her books and sign up for her newsletter on her website at http://robinbielman.com.

Connect with Robin at the following online locations: