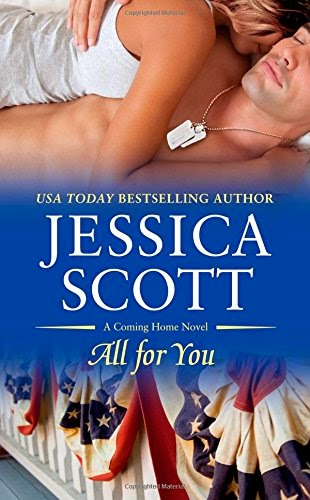 Making an alcoholic hero sympathetic is a difficult task, but Jessica Scott manages it beautifully in All for You. Sergeant First Class Reza Iaconelli has been deployed to war zones several times and is looking at another trip to the desert.  He knows he has a problem with alcohol but sees a bigger problem in his efforts to train his unit for their upcoming deployment. His first concern, always, is the welfare of the men under his command, and his dedication to them is the driving force in his days.

Reza has one soldier he thinks is faking emotional issues to avoid work and one who can’t get the help he needs for his PTSD, and Reza carries the weight of both.  Dealing with them brings him into conflict with a new psychiatrist, Captain Emily Lindberg, whose efforts to help are complicated by the military bureaucracy.

Spurred by the breakup with her cheating fiancé, Emily joined the army to do something meaningful with her life.  Her eagerness to learn what the soldiers around her will face helps break down Reza’s initial resentment of what he sees, particularly regarding the soldier he believes is faking, as her interference with unit discipline.

Dealing with the soldiers’ various problems becomes more difficult because of an unsympathetic company commander.  As the story progresses, situations that Reza initially sees as annoying take on a new and more ominous cast, and his difficulty in resisting alcohol increases.

Emily and Reza are an engaging pair.  Scott deftly leads them into finding common concerns despite their differences, and their personal chemistry is hot.  Characters from other books have roles to play, and the camaraderie of the soldiers in Reza’s unit is appealing.

The one fly in the ointment, for me, was a series of references to a potentially disastrous event in Reza’s past that was not fully explained. Those who have read the book in which this happened will understand.  Not having done so, I was baffled and distracted from the main story line. By the third reference to the problem back in Colorado, I was becoming aggravated at not having it explained.  If it’s that important, I want the author to just tell me about it so I understand why it matters so much.

Overall, this was a well written romance with admirable characters, a hot relationship, and an interesting plot.

What's your favorite story involving a military hero or heroine?  What books or movies do you like about characters facing personal trials?