Review - - The Duke of Dark Desires 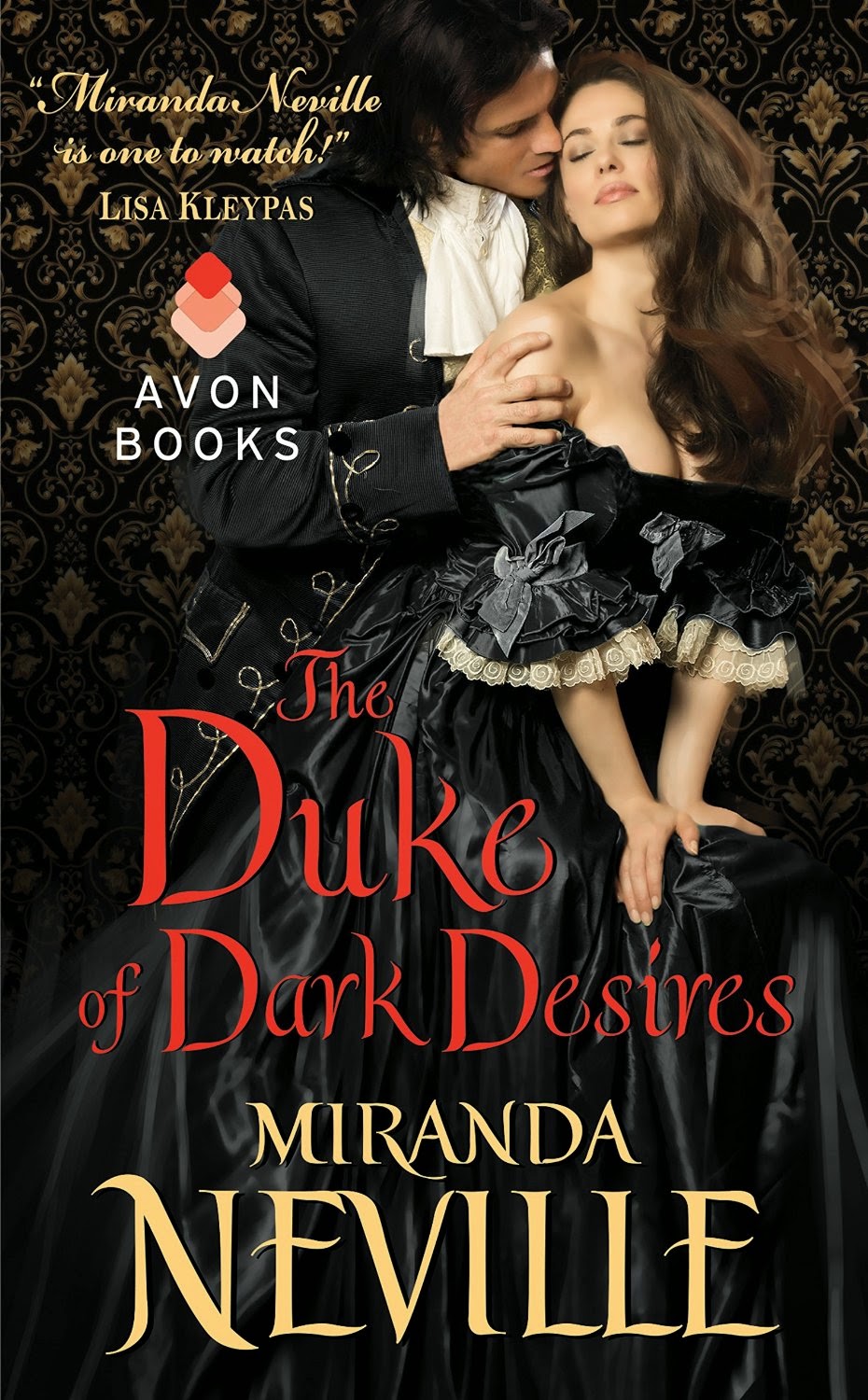 Julian Fortescue, a remote twig on the Fortescue family tree, became Duke of Denford because of a series of untimely deaths and a large number of female offspring in his extended family. Jeanne de Falleron, eldest daughter of the Marquis de Falleron, became Jane Gray because her parents and two younger sisters fell victim to the guillotine during the French Revolution, and she, the lone survivor, was left to assume the identity of her former governess. These two have been propelled into lives for which they were unprepared and which they never sought. They are brought together when Jane arrives in London in search of the Fortescue whose betrayal of her family led to their deaths. At about the same time, Julian’s mother, newly married to her third husband after being widowed twice, leaves him in charge of three young half-sisters whom he scarcely knows. Julian is in need of a governess for his charges, and Jane needs to identify and locate the guilty Fortescue whom she plans to kill in an act of vengeance that has become her purpose in life. Thus, Jane Gray joins the household of the Duke of Denford as governess to the duke’s charges.

From the moment they meet, the attraction between Julian and Jane is so powerful as to be almost palpable. He hires her as his sisters’ governess with the belief that she will become his mistress. While he doesn’t fully understand the strength of his desire for her, he has no doubt that it is returned. He determines to wait for her surrender and enjoys flirting with the drably dressed Miss Gray as he waits. Jane is certain that Julian is a skilled lover whose attentions she would enjoy, but she cannot allow herself to be distracted from her goal. As she and Julian engage in a series of moves that Jane likens to a chess match, and with both of them protecting their own secrets, they fall in love. They both also develop an unexpected fondness for Julian’s sisters. Jane decided early on that Julian was too young to have been the man who betrayed her father, but when he brings home the paintings she knows were part of her father’s cherished collection, she must decide what she will do if the man she loves is also the man she has pledged to kill.

In Jane and Julian, Neville has created two complex, vital characters. His mother’s careless maternal affection and the intense dislike that he and his stepfather feel for each other meant that Julian was on his own from an early age. He was only twenty when he allowed ambition to overrule his instincts and unwittingly played a role in the deaths of the Falleron family. Hedonism allows him to bury his guilt over that piece of his history. He finds sensual pleasure in his liaisons with many women, but his deep feelings are reserved for the art he buys and sells. The survivor’s guilt that haunts Jane is layered. Not only is she the only one to have escaped death but she did so by clinging to the identity of Jane Gray assigned to her by her father, thus denying her family. At fifteen, she chose to become the mistress of a French soldier rather than have him reveal her identity and send her to her death. Later she finds a measure of peace and pleasure as the mistress of a politician. Recognizing the pragmatism of her choices, she still views herself as a whore. Once they meet, these two who have controlled their feelings when they could control nothing else begin to lose some of that control.

Despite the darkness in their lives, neither Jane nor Julian is a bitter, brooding figure. They have retained a sense of humor, an awareness of life’s ironies, and a certain unswerving honesty within themselves. Some of my favorite moments were those laced with their humor and wit.

“That’s very good, Your Grace.” Her intriguing slightly foreign accent carried a note of amusement. “Do you find those blue eyes knock the ladies over like kittle pins?”

The best part of the book, however, was watching these two fall in love. Sometimes the hero and heroine in romance novels are so consumed by lust that they seem to become totally physical beings. I often wonder how they will spend their time together when they are not lust-slaking. Neville avoids this trap. The heat between Jane and Julian is strong and blessedly mutual.

Oh, but she would drown in those magnificent eyes. Before she could talk herself out of it, she seized his head and pulled his mouth down onto her parted lips and knew that she had never been kissed before.

The texture of his lips, his spicy taste spoiled her for any kiss, past or future. It was perfect and mind numbing and body awakening and utterly dangerous. He possessed her and she owned him back in blazing mutual exploration.

But these are two people who genuinely like one another and enjoy one another’s company. Their pleasure in one another is not only physical. At one point, Jane’s “heart fluttered wildly at [Julian’s] nearness and her mind blossomed at the pleasure of his conversation.” (Those words struck me as a most accurate description of time with a beloved.)


The Duke of Dark Desires concludes the Wild Quartet. It has been a strong series, and I gave high marks to the first three books: The Importance of Being Wicked (Caro Townsend and Thomas, Duke of Castleton), The Ruin of a Rogue (Anne Brotherton and Marcus Lithgow), and Lady Windermere’s Lover (Damian and Cynthia Windermere). But I think the best of series ribbon goes to this concluding novel. It has everything that makes a book a keeper—compelling characters, a credible plot with real conflict and no missteps, and wonderful prose. It is an extraordinary book, and I give it my highest recommendation. For those who wondered if Neville could possibly give readers a book in which the Duke of Denford lived up to all his intriguing promise in Lady Windermere’s Lover, I assure you that she succeeded. While I am impatiently waiting to hear what Miranda Neville has for us next, I plan to reread the Wild Quartet.