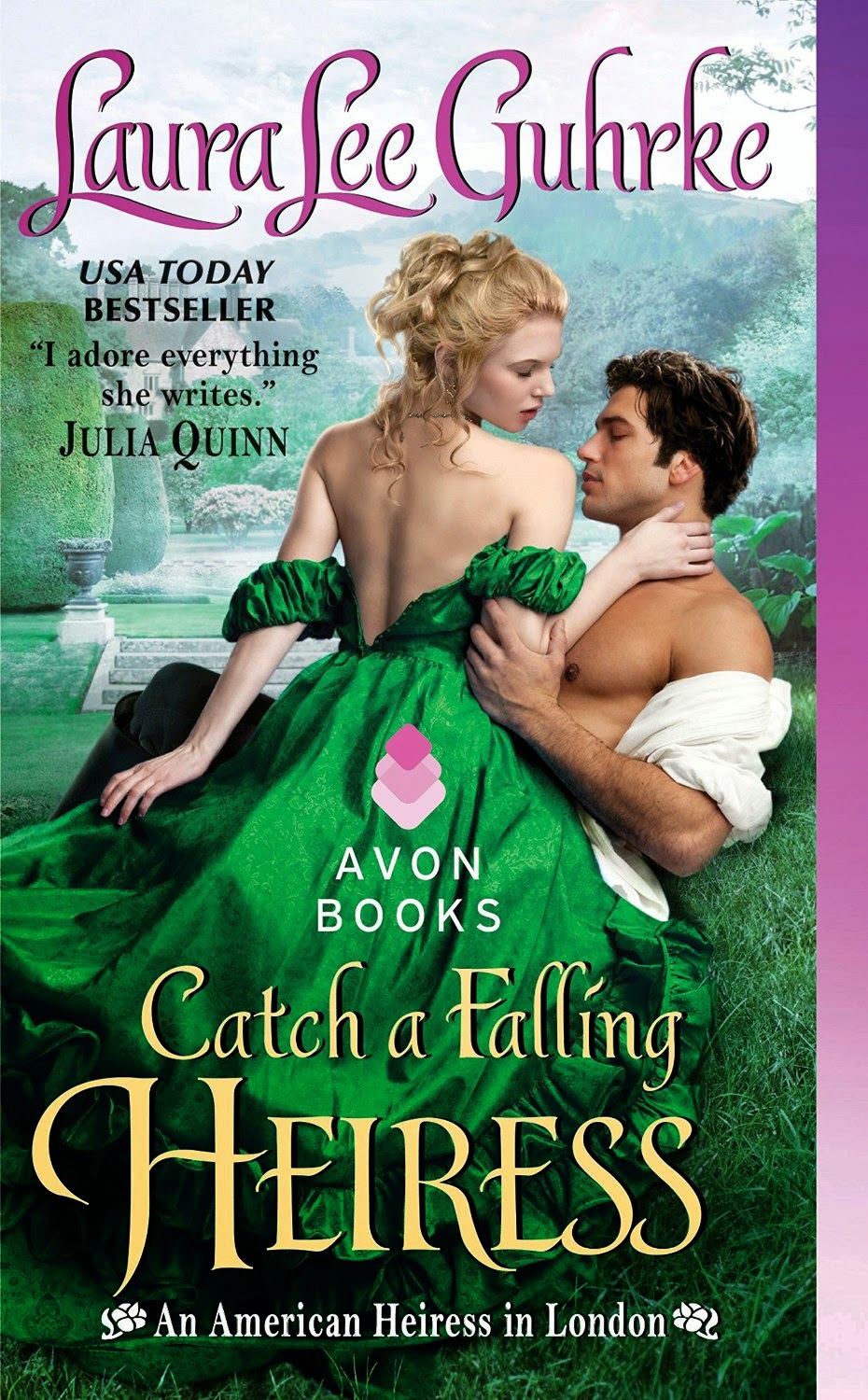 As a big Laura Lee Guhrke fan, I have been looking forward to Catch a Falling Heiress ever since her last book, How To Lose a Duke In Ten Days, sent the hero, Jack Featherstone, off to America on a mission of justice and revenge, on behalf of one of his best friends, the Duke of Margrave. Those who have read How to Lose a Duke in Ten Days will finally figure how exactly Stuart accomplished his goal of bringing the villain from Edie’s past to justice. During his time in America, he crosses paths with heiress Linnet Holland, and the two of them fight, argue, seduce, and stumble their way to love and happy ever after.

As a second son, Jack was never expected to assume the title.  However, with the untimely death of his older brother (the first husband of Belinda, Lady Trubridge, the heroine of When The Marquess Met His Match), he becomes the next Earl. With his estates left in shaky financial  condition and no feasible way of supporting a wife and family, Jack never thought those things were in the cards for him. However, one look at Linnet, and he knew he had to make her his.  I really liked the way LLG peeled back the layers of Jack’s character to reveal the strength and depth underneath. I liked that he was a restless man searching for purpose and direction, no longer content to just coast through life. While Jack may appear to be just a carefree charming peer of the realm, the truth is Jack has a deep sense of loyalty, duty, and right and wrong. Jack’s immediate willingness to go to American to help Stuart, and his determination to do right by Linnet after they are caught in a compromising position, speak of a man who is nothing like his careless and selfish father and brother.  I love the way he comes to show Linnet he is more than capable of rising to the occasion and being the man she needs him to be, while still remaining a charming, impulsive seductive rogue whose kisses make her toes curl. I also have to admit that there were times when I wanted to smack him over the head a little for leaping before he looked, and creating problems for himself and Linnet that could have been avoided.

Linnet Holland is a woman who is tired of being pursued for her fortune, and being a pawn to move around the chessboard by her well-meaning but calculating and ambitious parents.  She has learned through bitter experience that the vast majority of men come to her with agendas and ulterior motives. She is determined to find a love match, but that is all thrown out the window when Jack engineers for them to be caught in a compromising position. Refusing to be manipulated once again into a fait accompli in which she has no say, she endeavors to figure a way out of this tricky situation while trying not to succumb to her growing feelings for Jack. I really admired Linnet’s backbone and her refusal to go down without a fight. I certainly sympathized with her resentment and hurt at being manipulated and used, though I also shared some of Jack’s frustration when she second-guessed him at every turn and refused to believe in the sincerity of his words and actions, especially towards the end. But I loved the way Jack brought out her passionate side, and shows her that sometimes, you have to trust your heart, even when it makes no sense on paper.

I really loved the relationship between Jack and Linnet. The chemistry and sparks were off the charts and immediate. I am a big fan of battle-of-the-sexes romances and this is a great example of why I love them. Jack and Linnet are two hard-headed stubborn people who constantly push and challenge each other at every turn. They butt heads, but are clearly exactly who the other needs. Linnet needs someone who refused to be intimidated and was willing to prove himself. As Jack says, Linnet could never respect anyone who couldn’t hold his own with her and her father and just knuckled under. Jack needed someone who pushed him to dig deep, rise to the occasion, and find purpose and direction in his life. I loved the way LLG gradually had Jack and Linnet push through their misconceptions and facades to finally have enough faith in each other to take that big leap of love, marriage, and family together.  You know that Jack and Linnet will continue to fight, love, kiss, and make up for years to come, and they wouldn’t have it any other way.


I really enjoyed Catch a Falling Heiress and definitely recommend it to anyone who enjoys fun, sexy, sensual, and well written romances. The conflict between Linnet and Jack was well done and very believable, the writing was great, and the ending made me laugh and sigh with happiness. I can’t wait for the next book in the American Heiress in London series.