Spotlight on Tracy Solheim's Back to Before 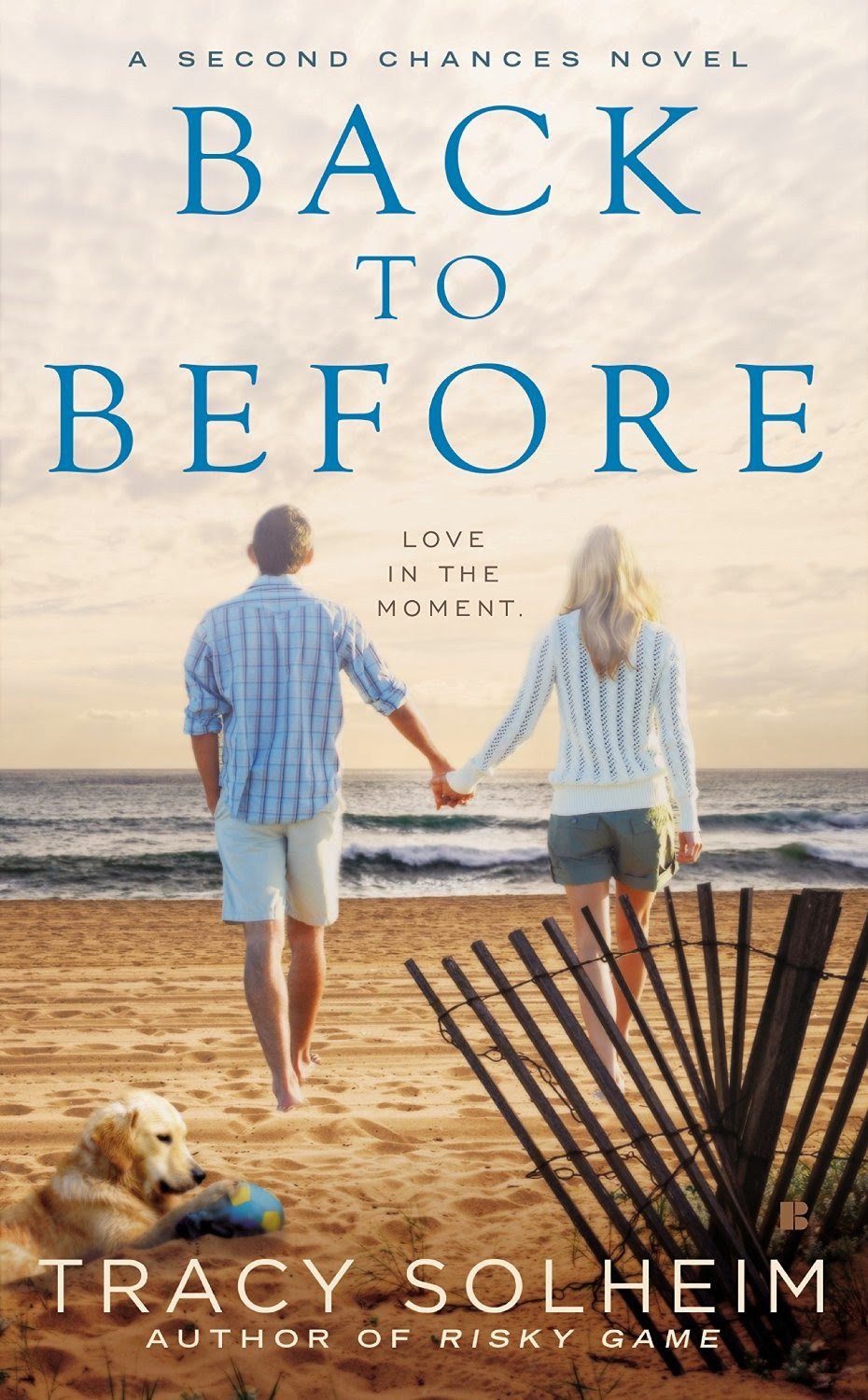 When his father dies, leaving the family construction business in a mess, architect Gavin McAlister moves home temporarily to put things to rights for his mother and siblings. losing his big-city fiancee and putting his NYC career on hold in the process. He's now been there two years but the end is finally in sight. In a few short months, with the help of a reality TV show, he'll have his father's debt paid off and will be able to return to the career he loves. There's just one small problem: his family and the town of Chances Inlet, North Carolina have no idea of the problems Gavin's father left behind and think Gavin is there to run the company permanently.

With her injury-halted ballet career and a role in a soap opera behind her, Ginger Walsh is hoping her new job as makeup artist and assistant to her long-time friend on his reality home restoration show will lead back to New York and a new career path. She doesn't expect to be charmed by the show's local construction expert or roped into helping the local citizens with their annual Founder's Day Celebration or a group of little girls who just want to dance. By the time the show wraps, will Gavin and Ginger take their second chances and head off into a New York City sunset, stay in Chances Inlet or go their separate ways?

I'm a fan of small-town contemporary romance and second chances. Tracy Solheim combines the two with heartwarming effect in BACK TO BEFORE, the first book in her new Second Chances series. Solheim is a wonderful storyteller whose characters are fully formed with all the strengths, vulnerabilities and flaws of people we meet in real life and whose books leave this reader sighing with satisfaction. I'm already anticipating my next visit to Chances Inlet.

Fans of Solheims's Out of Bounds series will be familiar with Chances Inlet and her well-meaning but meddling citizens from Foolish Games. Those new to her books will not miss anything by starting with Back to Before however they may be so intrigued with Will and Julianne that they will want to buy Foolish Games to read their journey to love.

Here's an excerpt from Back to Before.


In which sparks fly in the produce section of the Piggly Wiggly:
“According to Mom,” his brother was saying, “you and the actress who plays Destiny Upchurch were flirting up a storm with one another this afternoon.”
“Mom talks too much.”
Ryan laughed. “I’ll admit Ginger What’s-Her- Name is cute for a chick who’s bad to the bone, but the actress who plays Savannah Rich,” he gave a little whistle, “now, she’s hot.”
Gavin held his phone out at arm’s length, baffled.  “What is it with you people and this soap opera?  You’re a professional baseball player.  Don’t you have better things to do with your time than watch that crap?”
“There’s lots of down time in the clubhouse.  And SportsCenter tends to drone on after a while.”
Gavin shook his head in disbelief as he carefully scanned past the bins of fresh fruits and vegetables for any sign of Mr. Henderson.  The produce manager was nowhere in sight, but the object of his phone conversation, Ginger Walsh, stood before him holding a tomato, critically analyzing it as if it held the secret to the universe.
“Gotta go, bro. Thanks for heading Miles off before he asked me for his profit share of the company.”
“No prob—”
The rest was lost as Gavin quickly ended the call, nonchalantly steering his cart behind Ginger.   He caught a whiff of her perfume.  She smelled sweet, like the mint shampoo his mother left for the guests at the Inn.  But there was another scent too, something not quite so innocent.  Tendrils of hair had escaped her haphazard knot, dangling against her long neck.  Gavin’s jockey shorts grew tight at the sight of bare skin peeking out from underneath her shirt.
Seriously?  You couldn’t have been more alert two hours ago when I was wasting ninety bucks on dinner for what would have been a sure thing?
Frustrated, he picked up a bag of salad that likely would spoil before he ever ate it and tossed it into his cart.  Ginger didn’t flinch.
“It’s a tomato,” he finally said.  “You generally eat it.”
Startled, she turned to face him.  Awareness flashed in those incredible eyes before she reined it in.  Gavin bit back a smile as he realized she wasn’t immune to whatever attraction was pulling at them either.  His mother had described Ginger’s face as all angles, but what Gavin saw was a delicately sculpted chin, a lush mouth and high cheekbones.  Even her ears were cute.
“I’m trying to figure out if it’s organic,” she said.  “There’s no sticker.”
Gavin wasn’t sure someone could determine if a tomato was organic or not just by looking at it.  Hell, he wasn’t even sure if a tomato was a fruit or a vegetable.
“Does it matter?”  He realized the insensitivity of the question too late to stop himself from asking it.  Maybe she had a valid reason for being cautious about her food.   Or she was just like most women, concerned about her appearance.  He’d known women with more obnoxious idiosyncrasies.  Hell, she was an actress, wasn’t she?  Her compulsion about her diet could definitely be justified as job-related.
Ginger blinked her long lashes twice before shaking her head.  She put the tomato in a bag along with two others and placed them in her cart.
“I have to be careful what I eat.”  There was nothing delicate about her tone.  Clearly, underneath that slight body was a spine of steel.
Gavin shifted slightly, rubbing his hand behind his neck.  “Hey, I can see if Mr. Henderson, the produce manager, is here tonight.  He’d know.”  It’d be worth the risk, he told himself.
“It’s fine.  I’ll just be sure to wash them thoroughly.”
She looked over at his cart.  Aside from the token bag of salad greens, it contained a smorgasbord of processed foods.  Feeling a bit embarrassed, Gavin braced himself for the inevitable comment, but she reached down and pulled out the bag of dog treats instead.
“Midas must have been quite successful with the ladies in Wilmington.”  Her comment surprised the hell out of him.  Was that a hint of jealousy in her voice?
Gavin relaxed a little, leaning a hip against the vegetable bin and crossing his arms over his chest.  Maybe his aborted date wasn’t such a bad decision after all.
“Midas didn’t go to Wilmington.  You’re the only pretty woman he managed to take down today.”
She gave him another one of those slight headshakes, trying to hide the blush in her cheeks by reading the package.
“Yuck!” She tossed the bag back into the cart.  “You don’t really care too much about your dog if you feed him that.”
“What do you suggest, real pepperoni?”
She laughed at that, a pretty, tinkling sound that did strange things to Gavin’s body.
“They have organic dog treats.”


“You don’t say?”  He silently prayed she’d take a step closer.  Whatever magic that had been brewing between them outside the inn earlier had rekindled itself in front of the cauliflower and Gavin didn’t want it to end.

Do you watch soap operas? Have a favorite?
Are you a pet owner? Do you shop organic?
Have you ever struck up a conversation with a guy in the grocery store? Ever wanted to?
Have you read Tracy Solheim's books yet?
We have a copy of Back to Before for one randomly chosen person who leaves a comment on today's post. (U.S. only)

Email ThisBlogThis!Share to TwitterShare to FacebookShare to Pinterest
Labels: Back to Before, Contemporary Romance, Giveaway, PJ, Todays Special, Tracy Solheim