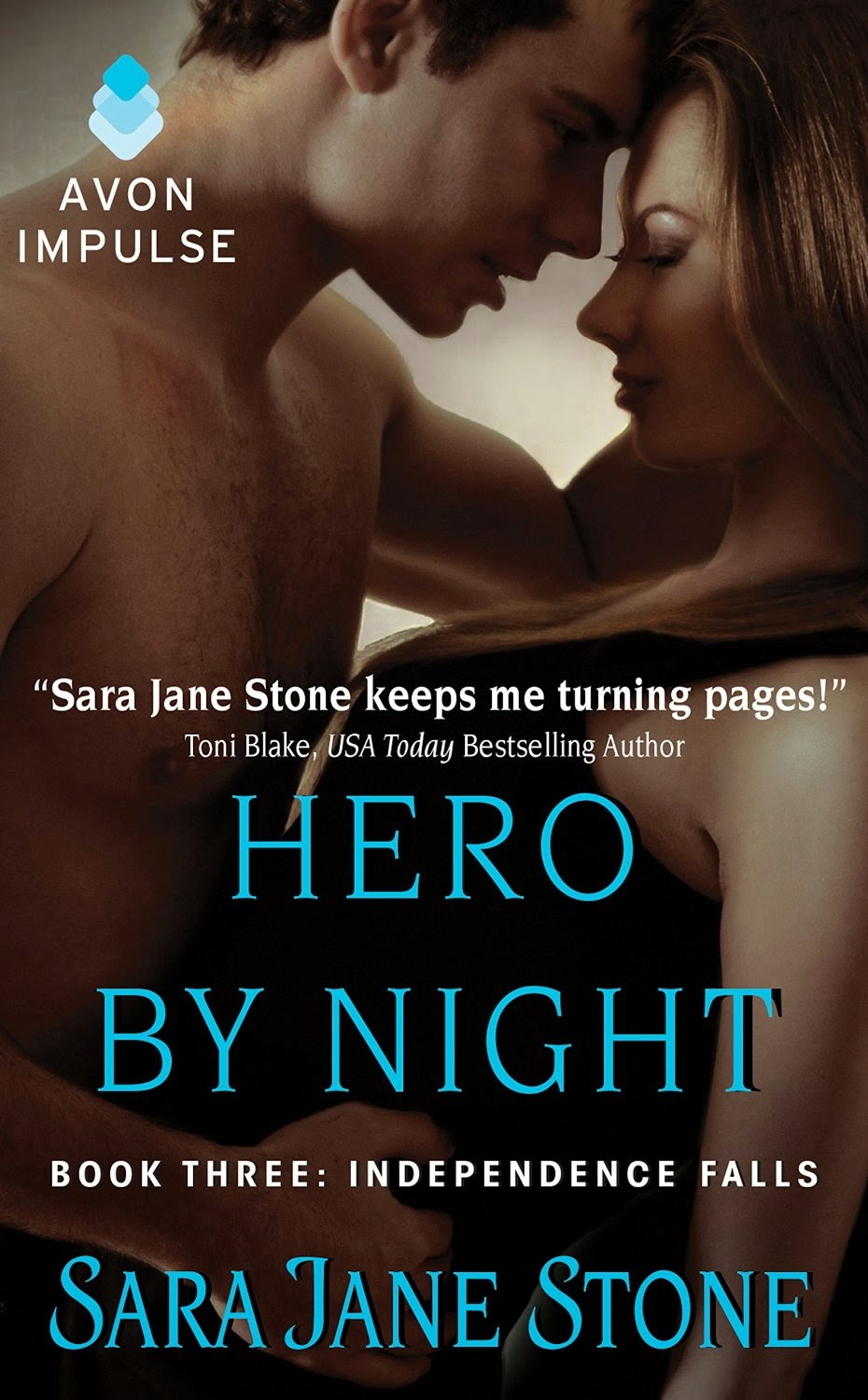 I was introduced to Sara Jane Stone a few years ago by Maya Rodale, a mutual friend. Naturally, I found her to be wonderfully kind, smart, funny, and talented.  I was excited and thrilled for Sara when she published her first book back in October of 2013. Sara writes hot sexy contemporary romances for Avon and Harlequin. I have read the previous installments in the Independence Falls series and enjoyed them immensely. Hero By Night is no exception.

Independence Falls is a small town in Oregon where the timber industry dominates and is the hometown of the hero, Chad Summers.  For years, he has cultivated the reputation of the carefree playboy, only looking for a good time, and focusing on the here and now. His mother walked out on their family years ago, and the pain of being abandoned, and seeing the devastation his father suffered made Chad determined to never let anyone get close enough to hurt him like that.  However, newcomer Lena Clark may be just the woman to change all that.  When his reputation catches up to him, he and Lena make a deal. They pretend to be in a committed relationship in order to help salvage his career, and have a private fling in private.  But before too long, it becomes all too real, and both Chad and Lena are reluctant to drop the “charade”.

I loved that Chad immediately sees the strength and determination in Leah that she doesn’t seem to see in herself. I loved that he immediately understood and respected her boundaries, and let her set the pace. It was wonderful to see him become one of Lena’s fiercest supporters and protectors, and showing her that he’s a steadfast man who will not run off. Unlike her family, he makes no demands or expectations of Lena, and convinces her that he’s there for the long term, and as far as he’s concerned, Lena is not broken or damaged at all. The lengths he went to to get Lena to her medal ceremony proved he was a man capable of great kindness and loyalty to those most important to him, and made me fall in love with him myself. Sara did a great job of tracking Chad’s emotional journey, and having him come to the realization that when it comes to love, sometimes you have to have the faith and courage to lay it on the line. I loved that he didn’t give up on Lena, and decided to fight for the relationship.  To me, that is definitely swoon-worthy hero material right there.

Lena Clark is a former soldier who served two tours in Afghanistan and has served her country with honor and distinction. In fact, she is awarded the Silver Star for bravery and valor on the battlefield. However, her service has also left her suffering from severe PTSD, and unable to continue her career in the Army.  The PTSD broke up Lena’s previous marriage, caused a huge rift between her and her family, and has her relying heavily on a service dog, a golden retriever named Hero. I love that Sara highlights the military in her novels, and shows the bravery and sacrifices of our men and women in arms. Her research is meticulous, and she treats the topic with the respect and sensitivity it deserves. I was definitely cheering Lena on as she conquered her demons and did the hard work to take the small steps to get closer and closer to “normal” even though the process can be excruciating some days. My heart went out to Lena as she battled doubts about ever making it to “normal” and seeing every setback as a huge failure. I love that by the end, she comes to see that she has what it takes to be strong when it counts, and as long as she keeps doing the work, she’s not failing herself or anybody else.

I need to take a moment to say that I really like pets in romances, and Sara wrote a great one in Hero. Just like Chad, he is incredibly protective of Leah, and does not hesitate to stand between Leah and any perceived threat. Sara made Hero a real character in his own right and he almost stole the show for me.

Sara's writing is definitely more towards the hotter end of the spectrum, so be prepared for love scenes that make you blush, lots of sexy dirty talk, x-rated love notes, and to never look at ice cream the same way again!
I would definitely recommend Hero By Night if you like hot steamy romances blended with just the right balance of humor, and sweet emotional romantic beats. I can’t wait for Wild With You, brother Brody’s book!