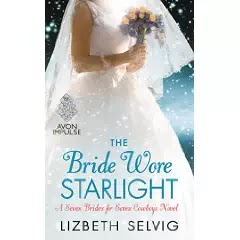 A former Miss Wyoming, Joely Crockett Foster spent a sizeable portion of her life in the spotlight being recognized for her beauty. Eight months after the road accident that almost claimed her life, she wants nothing more than to avoid attention, especially the curious and pitying looks that the sight of her scarred face and crippled leg are sure to evoke. But she could not say no when her older sisters, grateful for Joely’s survival and eager to have her share their big day, asked her to serve as matron of honor for both of them at their double wedding. Joely is happy for Harper and Cole Wainwright (The Bride Wore Denim) and for Mia and Gabriel Harrison (The Bride Wore Red Boots), but their happily ever afters just make her more aware of her own failed marriage and her cheating almost-ex, better known as Tim the DoucheWipe. All in all, it is fair to say that her sisters’ wedding day is as much ordeal as celebration for Joely—and that’s before she meets the former rodeo star who makes it his mission to see that Joely does not fade unobtrusively into the background.

Alec Morrissey knows what it is to be in the spotlight. He held three Professional Rodeo Cowboy Association titles before a tour of military duty changed his life forever. He knows all about the depression and self-pity in which beautiful Joely is mired, and he is determined to see her focus on all that she can do. But Alec sees himself and the hold his past still has on him less clearly. His challenges may serve to bring Joely back to a full life, but can he meet the challenge she issues in return to confront his demons and claim the life he and Joely can build together?

The Bride Wore Starlight is the third book in Selvig’s Seven Brides for Seven Cowboys series. I read and enjoyed Selvig’s Rural Gentleman books, but this was my first book in the new series. I had read only a few pages of the third book when I went to amazon and downloaded the first two, knowing that I was hooked on the Crockett sisters and wanted their full story.  I say this not to suggest that The Bride Wore Starlight cannot be read as a standalone. It can be. But the Crockett family is so appealing that I wanted to know more. For those who are interested, I read all three books in one day and loved them all, but the third one is my favorite.

Some may think Joely is a bit too self-pitying early on, but her reactions seemed reasonable to me given all the details. She is a middle child who has been shaped by her father’s attitude that her beauty is all she has to offer. Within a few months, she has been hit with the end of her marriage, the death of her father, and a traumatic accident with life-altering consequences. Her family adores her, but their protective hovering does nothing to move her into the reality of a new life.

Alec too makes a misleading first impression, appearing to be all brashness and flirtatious charm. I’m not often surprised by turns in a book, but Alec’s first revelation to Joely surprised me as much as it did her. It also cast his behavior up to that point in a totally different light. He is exactly what Joely needs, although it takes her a while to appreciate that fact. But this is not a story about a hero who saves the heroine. Despite all that Alec has accomplished and the success story he appears to be, he has vulnerabilities and obstacles as real as Joely’s, if less visible. She saves him too.

This is a deeply emotional read peppered with enough laughter to keep it from being too angsty. The relationship among the sisters and between them and their mother and grandmother is a strong enough thread to give the book the feel of the women’s fiction/romance hybrids I love. I also applaud Selvig’s choice to show Joely acting independently to demonstrate how far she has come. Joely doesn’t need Alec to survive, but his love makes her better and his presence enriches her life. That’s the best kind of romance in my opinion.

If you like romances that involve the lead characters overcoming the stuff life throws at them, I think you will love this book as much as I did. While you are at it, you might also want to grab the first two books.  I promise the three will give you hours of great reading.

Janga: Let’s get the big question answered first. Who is the next bride? And can you tell us who the seventh bride will be? I can think of at least four possibilities, and I know I may be wrong on all counts.

Lizbeth: The next bride will be one of the triplets—Grace. As those who’ve read any of the first three 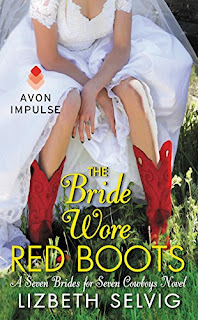 books know, the triplets were named after their father’s favorite two movie stars:  Grace, Kelly, and Raquel and they own a trendy coffee shop/restaurant in Denver. Kelly is the first of the usually inseparable trio to break away when there’s a falling out over business decisions. She returns to Paradise Ranch with a plan to start her own new restaurant, and she meets a man who believes he has ownership rights that are generations old to the Crockett family ranch. The pair ends up in a little bit of a mystery discovering the true roots of Paradise.

As for the seventh bride, we haven’t met her in the stories yet, although she isn’t officially a secret. A lot of readers have asked me if it’s Skylar from “The Bride Wore Denim,” but it isn’t. (I have other plans for Sky!) The seventh bride is a cousin (genealogically, a cousin once removed) who nobody knows exists. Her name is Camille and she is one-quarter Vietnamese—the daughter of a woman born to a Vietnamese woman and an American soldier named Crockett! Cami is a journalist and I have some fun times planned for her!

Janga: What about Mayberry? Are we going to see more of him?

Lizbeth: We definitely are!  I know he’s a strange, mostly undeveloped character in “The Bride Wore Starlight,” but he served his purpose—stripping away Joely’s starry-eyed view of Paradise Ranch and leaving her with nothing “perfect” left in her life. But Mayberry, aka Trampas, is the great uncle of the hero in the next book. In fact, mentions him in “Starlight”—Ty Garraway. So, yes, Mayberry will be in Book #4!

Janga: You get the complications of sisterhood—that combination of unfaltering love and loyalty, shared memories, and the knowledge of which buttons to push to raise a storm. Is that the voice of experience? 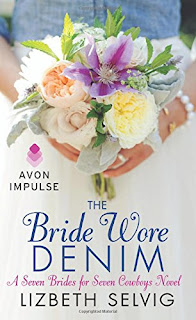 Lizbeth: Thanks so much for the compliment! You’ll laugh, but in reality I don’t have any sisters!  I do have three brothers, however, and they’re all wonderful men—just like our father is—so writing about family is second nature. Annoyances and squabbling definitely happen between the four of us, but there’s also fierce loyalty,  and we’re all close, so of course I drew from our family dynamics for the story and added bits and pieces of anecdotes I’ve heard from friends who do have sisters.

Janga: One of the things I appreciate most about your books is that although they are not inspirationals by any stretch, many of your characters are people of faith. Did you ever feel you were taking a risk by creating these characters?

Lizbeth: I love this question—it goes straight to the heart of my stories. Yes—I do think that putting the little faith elements in my books is risky. It confuses people to mix mentions of a character’s beliefs and values into a romance where the goal of the story has nothing to do with religion. I like making people stop and wonder about that blend. And even though my own faith is important to me, I’ve never been interested in writing inspirational romance. I believe whole-heartedly that people of faith (in any religion) lead “regular” lives:  they have messy adventures, they sometimes swear, and, yes, they even have sex! So I’ve always wanted to write traditional romances that would surprise readers with little touches of faith, like when Grandma Sadie says a quick prayer, or one of my characters wrestles in a given moment with a particular moral code. It’s fascinating to see what elements readers pick up on, and I hope it gives the characters and the story more dimension.

Janga: I’m always interested in writers’ influences. What authors influenced you most significantly?

Lizbeth: The first romance author I fell in love with was LaVyrle Spencer back in the ‘80s. She was the master of lyrical storytelling and intricate plots and wrote some of my first romance hero crushes (Jesse in “Hummingbird” anyone of my generation?!)  Over the years there have been many more influences:  Susan Elizabeth Phillips, Susan Mallery, Robyn Carr, Kristan Higgans to name just a handful. To this day, these amazing women are my role models.  I also want to give a shout out to all the Harlequin/Silhouette authors I read over the years—hundreds of them! Without them I wouldn’t have fallen head over heels in love with romance!

Janga: Is there anything else you’d like to add?

Lizbeth: First of all, a thank you for inviting me to the blog today. These were great questions! I hope readers have fun with the brides in “Seven Brides for Seven Cowboys” series. One of the things that’s fun about a series of this length is that I can play with so many different themes and voices. “The Bride Wore Starlight” is fairly heavy and emotional (with humor!), but Grace’s story will be much lighter and, as I mentioned, have a touch of mystery. Cami’s story at the end of the series will deal with scientific discovery and elements of pure fun. I think we’re on a great journey with the Crockett family.