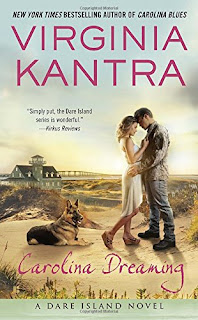 When rootless Gabe Murphy is acquitted of a murder charge and released after nine months in jail, he heads for Dare Island, North Carolina, the home of his friend Luke Fletcher (Carolina Man). With an abusive father and a mother too broken by years as his victim to stand up for her son or herself, Gabe never felt he had a home. With the death of his maternal uncle, he had no emotional ties either, and he’s been on his own since he turned seventeen. But he has good memories of the Fletchers and their warm reception when he visited with Luke, his buddy from their Marine boot camp days. These memories bring him to Dare Island when he’s looking for a place to start a new life. Luke is delighted to see his old friend, but Hank Clark, Luke’s hard-nosed colleague in the sheriff’s office, convinced Gabe is trouble, warns him “Stay away from Jane.”

A shy child, motherless from the age of eight when her mother abandoned husband and child, Jane Clark grew up on Dare Island. She always knew her father loved her, but his immersion in his law enforcement job plus his inability to communicate his feelings left her emotionally needy. She thought she had found the love and family she lacked when she fell in love and married at nineteen, but Travis Tirlett was an abusive jerk who abandoned her before their child’s first birthday and resurfaced years later only to give her more grief (Carolina Blues). Jane has gained confidence over the years, and she is proud of her bakery, Jane’s Sweet Tea House, and the life she has created for herself and her seven-year-old son Aiden. She still doesn’t trust her taste in men, however, and when Gabe Murphy shows up looking like the new and improved version of her ex, she knows she should avoid him.

Gabe thinks she should avoid him too. Jane is obviously a forever kind of girl plus she has a kid. Gabe is convinced he has nothing to offer such a woman regardless of how attractive he finds her. Jane is fearful of losing her heart and fiercely protective of her son. She’s convinced that acting on her attraction will lead to disaster, but when Gabe offers to work overtime to see the renovations to her bakery finished quickly, the chemistry between them proves explosive. And when Jane does act—wow! If they can trust themselves and each other, they may find the love and the family of their dreams.

Dare Island has become one of my favorite fictional places, and I eagerly anticipate each new novel in the series. Carolina Dreaming was one more opportunity to fall in love with the place and with the engaging characters Virginia Kantra creates. Gabe and Jane are scarred by their pasts, and their scars are part of them. But they refuse to let them be the whole. They are each determined to build a life in which they can take pride. I knew this was going to be one of those books in which the primary characters are adults worth knowing when early in the novel Gabe thinks “It didn’t matter where he’d been . . . He had to focus on where he was going. Even if he had to crawl to get there.”

The secondary characters are also richly drawn. Aiden is a real kid, a small person with his own history and quirks and interests. One of my favorite parts of the story was his interaction with Gabe. I also found Jane’s relationship with her father interesting, particularly since he is a fully human character, an interesting mix of weaknesses and strengths rather than a stereotypical bad cop.

As a fan of the series I loved seeing characters from earlier books appear, but I loved even more that their appearances were purposeful rather than having the feel of a rollcall of characters. The secondary romance was unexpected and endearing. In fact, my only complaint about the novel is that I would like to have seen some degrees fewer internal monologues and a bit more of Hank and Marta’s romance.

When I finish a book knowing that it is only a matter of time before I am ready for a reread, I know the book is a keeper. Carolina Dreaming is another Virginia Kantra book that left me with this feeling. I highly recommend it.