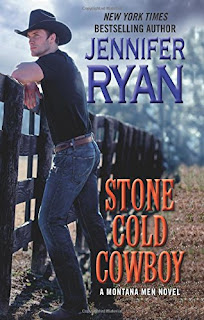 I discovered Jennifer Ryan about a year ago and she's quickly become one of my favorite contemporary romantic suspense authors. I've enjoyed all of her Montana Men books but Stone Cold Cowboy, the first of the Kendrick brothers' stories, is headed straight for my keeper shelf.

When her mother died, sixteen year old Sadie Higgins put her life on hold to take care of her father, help run the family ranch, and raise her sweet little brother. Several years later, she's still doing the same, working two jobs and trying to keep her drug-addicted, ungrateful brother out of trouble but things are getting worse instead of better. Her father's health is rapidly failing and her brother has signed on with some truly bad dudes. The price of Sadie's loving heart and refusal to give up on her brother just may be her life. Ryan does a superb job of writing the conflict in Sadie's heart. She's more mother than sister to her brother. Sacrifice comes naturally as does the hope and faith that he will come to his senses and finally do the right thing but there may also come the time when she has to let him go. As the oldest of five siblings, I understood in a visceral way, the anguish of the decisions she has to make.

Rory Kendrick is my kind of cowboy - strong, honorable, protective, romantic, and all kinds of sexy. I happily handed him my heart. He has spent years raising his younger brothers with his grandfather's help after his parents' deaths and working himself to the bone keeping their ranch afloat. He's no monk but there hasn't been a lot of time for fun. While he and Sadie have grown up in the same small town they've never met though Rory sure has noticed her. He's always thought he was too old for her (she's six years younger) and even though he carries himself with confidence he hides a vulnerable and wary heart beneath his reserved demeanor.

When a crime on his ranch leads Rory to discover Sadie in unimaginable circumstances it unites the two in a powerful way (and put me firmly in their corner). Her determination to do the right thing leads to more time spent together and gradually, as they come to know one another, their initial connection deepens into a love that will change the course of their lives...if they can manage to stay alive in the face of the deadly group of criminals who have them in their sights.

Suspenseful, emotional, and deeply romantic, Sadie and Rory's journey took me on a roller coaster ride and completely captured my heart. Ryan rounds out the story with a well-formed cast of secondary characters offering comic relief, poignant farewells, a few surprises, and life or death danger. The bad guys are so realistic and fully dimensional that I wanted to indulge in some old fashioned, Wild West justice while Rory's grandfather and brothers, on the other hand, made me want to indulge in some big ole bear hugs. I hope each of the brothers will have his own story because I am not finished with this family!

I have a print copy of Stone Cold Cowboy to give to one randomly chosen person who leaves a comment on today's post. (U.S./Canadian addresses only)

Are you a romantic suspense fan?

Have you read Jennifer Ryan's books yet?

Who's your favorite cowboy hero? (books or film - modern or historical)