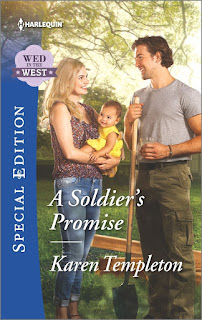 Levi Talbot returned to Whispering Pines, New Mexico, after a tour of duty in Afghanistan. His life-long best friend Tomas Lopez did not. Thinking about Tommy’s death cracks Levi’s heart, but it also makes him more determined to keep his promise to his friend. He knows that Tommy’s wife Valerie is not exactly a Levi Talbot fan, but Levi is going to take care of Val and her two daughters regardless. One look at the place Val and the girls are living is enough to let Levi know his help is needed, beginning with the crumbling porch.

Val Lopez was the daughter of a promiscuous and mean-spirited mother learned early that she had to stand on her own. When she and Tomas fell in love, for the first time, she had someone on her side, but Tommy left her, temporarily when he enlisted and permanently when he died. In her head, Val knows Levi is not responsible for Tommy’s choice to enlist or for his death, but in her heart, she needs someone to blame. Blaming Levi, whom Tommy admired, is easier than the other possibilities. Val may recognize—reluctantly—that she needs Levi’s help to renovate her grandmother-in-law’s house so that she and her daughters can live there safely, but she’s not about to grant him friendship status or allow him to become part of her life or the lives of her daughters.

Despite Val’s resolution, Levi earns a place in the lives of the Lopez family. His tenderness and genuine interest in them win the hearts of young Josie and baby Risa, and Val finds herself looking at him in a new way. Levi knows that he wants a life with Val and her children, but Val has to conquer her fears and believe that she deserves happiness before she and Levi can build a life together.

I know when I pick up a Karen Templeton book that I am about to encounter characters who seem as real and genuine as the family next door or the one three blocks over. The problems with which they struggle--family issues, financial concerns, letting go of the past, finding a balance between healthy pride and pride as a keep-out sign—will be similar to the problems with which people I know struggle. I approve of the focus on personal responsibility that is a recurring theme in Templeton’s novels. Levi’s words to Val are not mere dialog; they are important words, words worth pondering: I know I can’t make you happy, Val. Or get rid of the fear for you. Only you can figure out how to do that. But I sure as hell want to be there when you do.”

Templeton’s books are unlike real life only in that I can depend on them to provide a happily-ever-after.  All of these qualities are part of A Soldier’s Promise plus the extra poignancy that comes with the military theme. I like Levi and Val, and I understand them. I like Levi’s family and Val’s in-laws and the imperfect familial love that has a rare authenticity.  The kids too are real people with individual personalities. Some may find Josie overly precocious, but having seen firsthand the speed at which some children mature when forced to cope with traumas such as death and divorce, I found her fully credible.

I know some readers avoid category romance, but if you love small-town, heartwarming stories in which the central romance plays out within rich contexts of family and community, you can’t do better than a Karen Templeton book. I recommend that you check this one out today.