Review - - Keep on Loving You 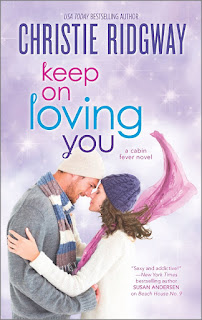 Christie Ridgway returns to Blue Arrow Lake, California, for the conclusion of her Cabin Fever series. All the Walker siblings except Mackenzie, the eldest daughter, have found their true loves and are in the midst of their HEAs. Mac is happy for her siblings, but all their bliss has her feeling lonely and a bit sorry for herself. Her house cleaning business is flourishing, and she enjoys a close relationship with her growing family. She has an established place in the closely knit mountain community where she has always lived, but none of this enough. Three broken engagements offer evidence that despite all Mac’s efforts she has been unable to really move on with her life in the decade since her first love, Zan Elliot, left her and Blue Arrow Lake and headed for a more adventurous life in a larger, bolder world.

After ten years away, much of it with a documentary crew filming in exotic locales, Zan Elliot has returned to Blue Arrow Lake to settle the estate of his wealthy grandfather. Zan is looking forward to reconnecting with the Walkers, the best part of his life after he was sent to live with his grandfather following the deaths of his parents and siblings in a plane crash. He is unprepared for the changes he finds in the small town, especially the cool reception he gets from some of the Walkers. The pessimistic, cautious Mac is certainly not the effervescent optimist with whom he fell in love. But however great the change or however adamant her claim that she is over him, it is clear to Zan that the chemistry between them is still explosive.

Zan’s return is strictly temporary. He plans to leave as soon as he completes all the business related to his grandfather’s estate, but in the meantime he devotes himself to winning Mac’s trust again. However, Mac is determined to guard her heart. The people of Blue Arrow Lake, even some of her own family, may believe in the legend of Mac and Zan as destined lovers, but Mac has not forgotten what it feels like to be the one left behind. And Zan is still the leaving kind.

Christie Ridgway is an author whose contemporary romances I generally enjoy, including the earlier Cabin Fever books, but I struggled with this one because I really disliked the hero. I understand that the losses he suffered at a young age left emotional scars, but heroes who have endured more have learned to be open and vulnerable. Zan never seems to learn this lesson. He also acts selfishly. Even the postcards he sends Mac while he is away seem a way of holding on to her after he has left her. He insists he is leaving soon but demonstrates no real understanding of why Mac is desperate to avoid renewing their relationship in light of his plans.

The reunion trope is my favorite, and so I began this book with high expectations. I did like Mac. She has known her share of heartbreak, but the love and responsibility she feels for her siblings are strong and keep her on track. As an eldest sister, I understood her. I applauded the way she responded to Zan’s return—still attracted to him but angry and wary and determined not to repeat a painful chapter in her life. I loved seeing the in-progress HEAs of the other Walkers, and I found the secondary romance interesting and touching. All of these elements kept the novel from being a total loss for me, but they were not enough to outweigh my dissatisfaction with the hero.

If you are a Ridgway fan who has liked the first three Cabin Fever books (Take My Breath Away, Make Me Lose Control, and Can’t Fight This Feeling), you will probably want to read this fourth book to feel that the series is finished, but if you are new to Ridgway, this is not her best work. I recommend her Christmas/New Year’s duo or her Three Kisses trilogy instead.