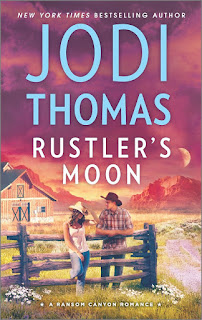 Angela Harold’s father may have been died from a heart attack during a random mugging, as the police believe, but when she finds an incomplete, hidden note from him warning her to leave Florida and vanish because her life is at risk, she follows his advice. Fortuitously, the position as curator of a tiny museum in a small Texas town that her father had encouraged her to apply for is offered to her. Angela accepts the job and, taking only her cat, the replica of a necklace that is a family antique, the money her father left her, and a few other belongings, Angela heads for Crossroads, Texas, and a new life. In Crossroads, she finds friendship, community, and Wilkes Wagner.

Wilkes returned to Crossroads and the family ranch after four years of college football and three years in the army. For six years, the responsibility for Devil’s Fork Ranch, home to five generations of Wagners, and for his great-uncle Vern have been his. Wilkes likes his life, and he does not share his Uncle Vern’s concern about Wilkes’s lack of a wife and children. Wilkes has been strictly a love-’em-and-leave-’em type since Lexie Davis, his high school girlfriend, sent him a Dear John letter less than three months into his deployment, and he is in no hurry to change his status. Not even Lexie’s return changes his mind, but the new museum curator, the very opposite of his usual long-legged, dark-haired, laughing-eyed flings, has him thinking in terms of words like love and forever.

Yancy Gray’s life is very different from the one he knew before he wound up in Crossroads. The ex-con has a job he enjoys, a truck for which he paid cash, and friends he trusts. But Yancy is disturbed by the hold an abandoned house has on him. He feels a visceral connection to the place even as he senses that it is a site where evil occurred. With the help of his friend Wilkes and the new curator, Yancy hopes to uncover the secrets of the house. In doing so, he will discover that he has a closer connection to Crossroads than he could have imagined.

Lauren Brigman, daughter of the local sheriff, is now a student at Texas Tech, as are Lucas Reyes, Tim O’Grady, and Reid Collins, the others who were involved in the incident at the old Gypsy house in Ransom Canyon, the first book in the series. Lauren is still in love with Lucas and looking forward to having more time with him now that they are in the same place again. But Lucas is so focused on the future that he has no time for the present. Lauren’s roommate, a troubled girl with little sense of self-worth, adds another complication to the mix.


This second novel in Thomas’s Ransom Canyon series showcases this Thomas’s skill in weaving several plot threads into a connected, coherent whole. Angela and Wilkes are the central characters, and Thomas links the secondary plots to their story. The danger Angela faces is real, but facing it helps her to grow. Wilkes, who has been content to live life on the surface, finds himself as he seeks to protect her. For me, the best romances are always those in which love empowers the hero and heroine to become their best selves, and that is what happens with these characters. Other characters, from Uncle Vern to the wounded Polly Pierce, claim the reader’s interest and sympathy as well. Once again Jodi Thomas proves that she is storyteller with a rare gift. I recommend this book, and I expect Lone Heart Pass (an April 26 release), the next Ransom Canyon book, to be equally excellent.

I'm going to borrow a question from the Q&A below. Tell me, readers: If you had to wear a t-shirt with the same saying every day, what would it say?

MLM is offering a print copy of Rustler's Moon to one randomly chosen person who leaves a comment on today's post. (U.S. addresses only)

1.     This is your second book in the Ransom Canyon series. Tell us about the town.

In RUSTLER’S MOON the town of Crossroads has grown.  After allowing their museum to sit empty for a year, the book opens with a new curator coming.  The museum comes alive and brings the town together as Angela Harold wakes up to life and loving for the first time.  The quiet, shy curator carries a secret that will threaten the whole town and leave rancher Wilkes Wagner fighting for his life as he protects Angela.

2.     We’ve heard you have an inspiration room for your writing. Tell us about the spot.

Ransom Canyon room:  When I began the series, I moved my computer to a little room out back of my house.  We call it the bunkhouse.  It’s not big, mission designed and almost a hundred years old.  I took down all the western art and put up white boards.  Removed all books except those on ranching, horses, Texas, or research I might need. Family histories of characters fill one wall.  Plot lines another.  When I step into the bunkhouse, I step into the world of Ransom Canyon.  One by one my characters come in and sit down to tell me their story.
I even have pictures of the flowers of Texas taped up in the bathroom and a Jack Sorenson print of horses running into the canyon on the door.

3.     Are there any characters in the series you’d consider for a spin-off?

Yes.  There are characters outlined on one board of my study that may not make it into this series.  Who knows?  Maybe they’ll find their way in the future.

4.     If RUSTLER’S MOON were made into a movie, who would you cast as the lead characters?

Like many of my readers I spent my Christmas holidays snowed in and watching Hallmark movies.  Almost every movie I’d say, “That actor would be perfect as this character.”  I’d love to hear from my readers about who they see as playing Wilkes Wagner in RANSOM CANYON.

Coming this spring will be LONE HEART PASS.  Another modern day ranching story set in Texas.  It opens with a woman giving up on a career and taking what she thinks is her last chance to survive by coming to a small ranch her grandfather left her.  She hires a cowboy to help who has a pickup full of baggage, a five-year-old daughter and a determination that surprises her.

6.     If you had to wear a t-shirt with the same saying every single day, what would it say?

That is an easy one.  When I started writing I went to a writer’s conference in Oklahoma one year and bought a t-shirt.  Every night when I stepped into my closet sized study, I put on that shirt.  I wore it out, but I wore it until I sold.  It said, NEW YORK TIMES BESTSELLER, in training.

7.     If you were a punctuation mark, which one best suits your personality?

If I were a punctuation mark I think I’d be a semi-colon.  Half the time I don’t know where
I belong.  No one really understands me.  I think I’m kin to a comma.  Which were left on
earth millions of years ago by aliens just to confuse us so we’d never evolve completely.

I love traveling.  Wherever I go, I always think I’d love to live there.  I was twenty-one when I first crossed the Mississippi heading east.  I spent so much time pointing out all the trees my new husband stopped the car.  “We’re heading to Fort Mammoth, New Jersey.  There are trees from now on, Jodi, so stop yelling every time you see one.”  The next three years we crossed the USA several times in a 1970 Camaro and everywhere we went I was excited at all there was to see.
But, in truth, when the time comes, bury me in Texas with the open sky and land so flat you can see the curve of the earth.  It’s where I belong.  It’s in my blood.

I’d be a teacher.  Teachers change the landscape of your life.  Mrs. Dickerson in the fourth grade saw that I couldn’t read.  She took the time to learn why and send me to a school for two summers.  She opened the world of fiction for me.  Without her, I would have been fine.  With her, I’ve lived a much richer life.
I’m the writer in residence at West Texas A&M University and the best part of my job is sitting down with students in my office and beginning our journey with, ‘So, you want to be a writer?”

I can’t answer that question because the answer changes every day.  I love curling up with an old book and reading it for the second or third time.  I love discovering an author and seeing a new fresh voice.
I have a loose grip on reality.  Give me a good story.  Take me away into another world for a few hours.  Make me laugh.  Make me cry.  Make me fall in love again for the first time.