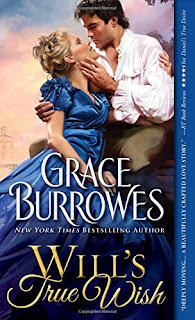 Will Dorning may be heir to his elder brother’s earldom, at least for the present, but his primary roles are diligent caretaker and mentor to his brothers and trainer and friend to an array of canine companions. The Dornings are aristocrats, but it is widely known that the family coffers are not overflowing. Will has dreams of a future that will allow him to use his gifts as a dog whisperer to achieve financial stability that will make possible a life of his own, but first he feels bound by affection and duty to see his brothers settled.

Lady Susannah Haddonfield has accompanied her brother and sister-in-law to London for the debut of Della, her youngest sister. Susannah’s memories of her own first season are not happy, and she would prefer to avoid London. But knowing that her sister’s physical dissimilarities to all the other tall, blond Haddonfields may set the gossips buzzing, she sets aside her preferences to be by her sister’s side. One of the few bright memories of Susannah’s earlier time in London is of Will Dorning and his kindness. She has never forgotten that he became her champion when vicious ladies made her life miserable. When said sister is the unintended victim of an episode involving a suitor, a dog, and a young Dorning, Will Dorning reenters Susannah’s life.

The spark that was struck when Susannah and Will were younger reignites upon their renewed friendship, but given Will’s straitened finances and the family duties he insists are his, their future looks dismal. Nevertheless, once Susannah is sure of Will’s love, she remains hopeful. She is convinced that if Will captures the dognappers that are stealing the pets of London’s elite, their problems will be solved. Will is less certain, but he cannot ignore the plight of the poor dogs, some of whom he trained. Danger and dogs and high courage and resourceful family members will all play a part in guaranteeing these two their well-deserved HEA.

I’ve been falling in love with the characters Grace Burrowes creates since I first read The Heir in late 2010. Predictably, I adored both bookish Susannah and dog-loving Will. He may not share her love of Shakespeare, and she may be leery of his canine comrades, but they nevertheless have much in common. At heart, they are the same kind of people, and they both are devoted to their families.  Most readers will find them engaging and root for their happiness.

Another of the delights of reading a Burrowes historical is a fictional world where connections, loose and close, frequently abound. Susannah is the sister not only of Lady Nita Haddonfield (Tremaine’s True Love, True Gentleman 1) and Lady Kirsten Haddonfield (Daniel’s True Desire, True Gentleman 2) but also of Nicholas Haddonfield (Nicholas, Lonely Lords 2), and Will is the brother of Jacaranda, wife of  Worth Kettering (Worth, Lonely Lords 11). Jacaranda and Worth are secondary characters in Will’s True Wish. Burrowes provides a full cast of interesting secondary characters. Will’s relationship to the dogs he befriends is almost as important as his relationship to Susannah, and the dogs have distinctive personalities as well.

If you are looking for a romance filled with humor and charm, large, loving families, and endearing, frankly lusty heroes and heroines, you can’t do better than a Grace Burrowes book. I recommend Will’s True Wish, and don’t worry if you have not read the other books in the series. Despite the connections, this one can easily be read as a standalone.  As for me, I’m keeping my fingers crossed that Burrowes is planning a Dorning Brothers series. I’d like to see more of Will’s brothers.