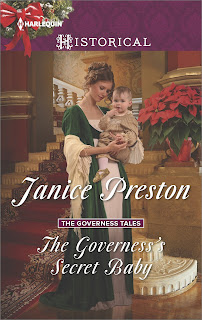 Preston combines the secret baby trope and elements of Beauty and the Beast to create this gothic tale. Grace Bertram, who was trained as a governess at Madame DuBois’ School for Young Ladies, kept her pregnancy a secret and surrendered her child for adoption because it was best for the baby. But she mourns her loss, and when she learns the names of the couple who adopted her daughter, she is determined to find her child and confirm that she is happily settled with her adoptive parents. Instead of finding young Clara with her adoptive parents, Grace finds that the couple perished in a carriage accident and Clara is in the custody of her reclusive uncle, Nathaniel Pembroke, the Marquess of Ravenwell. Grace follows her search for her daughter to Shiverstone Hall, the Yorkshire home of the marquess.

Nathaniel was horrifically scarred in the same fire that killed his father nine years earlier. After being rejected by two women, he is convinced that his scars repulse everyone and has withdrawn into a life of isolation in which his companions are his horses, his dogs, and the raptors he trains. Upon the deaths of his beloved sister and her husband, Nathaniel’s only friend, Nathaniel becomes guardian to his two-year-old niece. He needs a governess, and Grace seizes the opportunity to be reunited with her child. Grace soon discovers that Nathaniel is not the monster of village gossip but instead is a lonely, decent man devoted to his niece. The reader will be pleased to see these deserving characters predictably find happiness together.

This is the fourth book in a series, but it is the first one I have read by this author. I admit that I requested the book for review because I thought the title suggested a tongue-in-cheek treatment of the secret baby trope. I was wrong. The novel reminded me of the gothic romances I read by the dozen in the late 1960s and 1970s. Even the language is similar at times. Unfortunately, except for a few old favorites, gothic romance is not my genre of choice in 2016. The Governess’s Secret Baby is well-written, true to the conventions, and a bit different with the secret baby, but frankly there are other books I’d rather be reading. 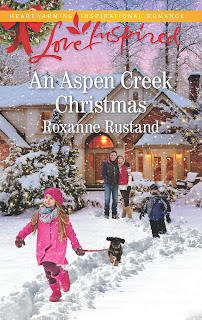 It’s a few weeks before Christmas, and Hannah Dorchester is hoping the holiday will help her young niece anJanid nephew feel more at home in Aspen Creek. In the seven months since their parents’ deaths, Molly and Cole led unsettled lives. They are sad and bewildered by their latest move to Aspen Creek, Wisconsin. They miss their parents, and Molly particularly wants to go back to Texas where her friends are.  Hannah believes that if she is loving and patient, the children will learn to feel at home in the small town. If things go as planned, in ninety days her temporary custody of the children will become permanent custody.

Ethan Williams knows that Hannah will not be pleased to see him. The two of them haven’t met since he jilted her and disappeared with no explanation and no goodbyes thirteen years ago, but however awkward his appearance may be, Ethan is sticking around Aspen Creek. Ethan knows what it’s like to grow up without the support of loving parents, and he wants to see that his brother’s children have everything Ethan and Rob lacked, and he doesn’t believe Hannah can ensure they have what they need. His lawyer advised him that Molly and Cole need to be comfortable with him, the uncle of whom they have no memory, if the courts are to rule in his favor in the custody suit that seems inevitable. Hannah may be uneasy, but Ethan is staying.

Time in Aspen Creek lets Ethan see all that the town, Hannah’s church family, and her menagerie of recued animals have to offer the children. Time together reawakens all the feelings that Hannah and Ethan thought belonged to the past, but if their second chance at love offers lasting happiness and the creation of a family, the two must let go of the past and trust each other.

This is the third book in the Aspen Creek series, but it can be read easily as a standalone. It is a sweet story. The characters, secondary as well as leads, are believable and likeable, and it is easy to root for them to conquer obstacles and find happiness. This is an inspirational romance, and religious faith undergirds the story. However, the author tells her story without sermonizing. 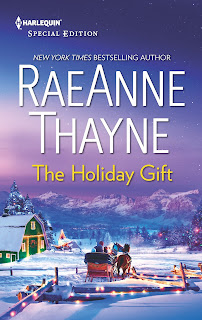 The Holiday Gift is the fifteenth book in Thayne’s Cowboys of Cold Creek series; it is the seventh Christmas story in the series. It completes the story of the three Nichols sisters who grew up on their aunt and uncle’s ranch outside Pine Gulch, Idaho. Each sister has dealt differently with the trauma of their missionary father’s death and their captivity at the hands of insurgents. Hope has found her happiness with former Navy SEAL Rafe Santiago (The Christmas Ranch, 2014), and Celeste found hers with millionaire Flynn Delaney (A Cold Creek Christmas Story, 2015). Now it is Faith’s turn.

Faith Nichols Dustin was widowed two years ago, and although she is happy for her sisters and fond of her brothers-in-law, she is not expecting to replicate their stories. She thinks she has already had her love story. Now her life is that of a single mom with two children and a family ranch to run. She misses her husband Travis, but her life is full with her kids, her aunt, her sisters and their growing families, and Chase Brannon, her best friend of two decades--the one she turns to when she needs help on the ranch or just needs a friend. When Chase upsets the even keel of Faith’s life with a kiss under the mistletoe, Faith is terrified of the changes that loom within her and within her world.

Chase has been in love with Faith forever. He was too slow to act when they were kids, and he watched her marry and build a life with his friend. He wished them happiness and even tried to find happiness in marriage himself. But the best thing that came out of that relationship was his daughter. He has continued as Faith’s steady, dependable friend for two years of her widowhood, but he wants more. And this time he is taking action to give his dreams a chance.  Christmas seems like the perfect time to ask for a “real date.”

This is another friends-to-lovers story, and it is told with Thayne’s usual warmth, sweetness, and focus on family dynamics as context for the romance. It is a style for which I have a great affection, and I have been looking forward to seeing Faith and Chase realize they are in love. Chase is a true cowboy hero with the competence and quiet strength that are a large part of the appeal of that mythical figure. He is so easy for the reader to love that I suspect many readers will grow impatient with Faith’s slowness in accepting him, but Chase remains patient because he knows Faith’s history of loss and understands her fears.

Faith’s relationship with her sisters and with the kids—Chase’s daughter as well as her own two—is an effective counterpoint to the romance. I also really liked that Chase’s ex is not superficial or evil. She is imperfect, but she is a loving mother who wants the best for her daughter. The proof is in a well-adjusted child who is confident that all the people in her life love her.

The Holiday Gift is a lovely gift to Thayne’s readers. If you like sweet, small-town romance, I recommend you treat yourself to this one.