Review - - Breakup in a Small Town 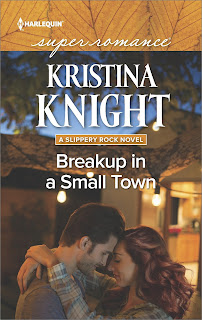 When an F4 tornado devastated Slippery Rock, Missouri, Adam Buchanan suffered injuries that changed every part of his life. His doctors are delaying surgery on the injuries that confine him to his wheel chair until they discover the right combination of medicines to control the epileptic seizures that are a result of the brain injury. Angry and depressed, he refuses physical therapy and the use of a service dog. He is mired in self-pity, convinced that he has become useless as a husband and father.

Jenny Buchanan has also been changed by her husband’s injuries. Married at eighteen, she has been content to let Adam be the decision maker in their domestic life and in the business, Buchanan Cabinetry, which she and Adam bought from his parents. After Adam’s injury, she was forced to make decisions at home and to fight to keep her well-meaning but conservative in-laws from sabotaging the vision she and Adam had for the business. She is also concerned about her two young sons who are anxious and fearful after the tornado and the changes in their father. Stretched thin from all these demands and with Adam rejecting her every effort to help him return to the man he was, Jenny wonders if even love is enough to save her marriage. She asks Adam to leave.

Adam goes only as far as the borrowed RV he has parked on the couple’s property, but it is far enough to make him aware of all that he could lose. Is it too late for him and Jenny to rediscover the connection they believed was forever?

This is the third novel in Kristina Knight’s Slippery Rock series, following Famous in a Small Town and Rebel in a Small Town. Readers of the earlier books will be familiar with the Buchanans, although it is not necessary to have read the other two books to enjoy Adam and Jenny’s story. Knight does an excellent job with this marriage-in-trouble tale. Adam and Jenny are both flawed but sympathetic characters. Adam’s injuries are not the cause of their problems; they serve rather as the pressure point that exposes the cracks in what appeared to be a happy marriage. Despite his responsibilities as a business owner, husband to Jenny, and father to Frankie and Garrett, Adam has remained in many ways the boy he was. His car, an inappropriate choice as a family vehicle, and his reluctance to lose it are symbolic of his immaturity. Jenny is generally more likable than her husband, but she also bears some responsibility for the weaknesses in the marriage. Conditioned by her relationship with her parents to allow someone else to run the show, she has never asserted herself.


Knight has a gift for creating a believable community and characters who are interesting and relatable. Breakup in a Small Town is the most complex story in a solid series. I recommend it—particularly for readers who like books that explore what happens when the HEA proves to be more real life and less fairy tale. Adam’s brother Aiden is another interesting character, one who makes me hope to see at least one more book in this series.
Posted by pjpuppymom at 12:30 AM