After a very busy summer when I hardly had a moment to pick up a book, I decided to give myself a birthday treat this month. I made sure to set aside plenty of time in September to catch up on recently released books that were threatening to turn my tbr stash into a giant mountain range. Some were good, others were great, but there were a few that pulled me deeply into the author's fictional world and refused to let go, keeping me reading way past my bedtime and lingering in my mind long after I turned the final page. Here are my thoughts on those fabulous, 5-star reads. 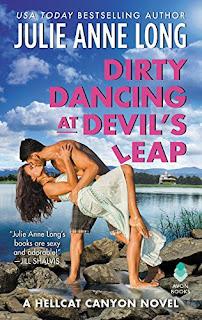 She was a naive country girl. He was a billionaire's spoiled son. He was her first crush, her first heartbreak...and now her sworn enemy.
As Avalon Harwood's fortunes soared, Maximilian “Mac” Coltrane's plummeted, and he had to fight his way back to where they both began: Hellcat Canyon. Now Mac and Avalon will play dirty—in more ways than one—to get what they each want: the glorious old abandoned Coltrane mansion. But when Avalon snaps the house up at auction, she discovers there's something awfully familiar about the extremely hot caretaker...
Mac might have a heart of stone, and the abs to match, but Avalon—the dazzling girl whose heart was always too big and too reckless for her own good—was always his Kryptonite. And just like that, the stakes change: suddenly they're fighting not just for a house, but for a magic they tasted only once before and never since—long ago, with each other, at Devil's Leap.

It's no secret that I've been a fan of Julie Anne Long's writing for many years but with the first three books in her new contemporary romance series, she's taken that writing to a new level of excellence (her command of the English language is breathtaking) and my love of her stories to new heights. I adored this book! The characters are so well drawn, beautifully flawed, continually evolving, and realistic.

I loved Mac and Avalon's tug of war of one-upping each other. I laughed uproariously at their antics. I appreciate that Long gave them depth and didn't make this second chance easy for either of them. The secondary characters excelled in helping to move the story along while providing comic relief, conflict, and opportunities for growth. I especially enjoyed Avalon's 11-year-old niece, Annelise. The scene featuring Mac, Annelise, and her inquisitive, non-stop talking Hummingbird troop, in addition to being one of the funniest I've read in ages, convinced me I was going to fall head over heels in love with Mac, right along with Avalon. I can't wait for Annelise's mom's story. I won't be surprised if Annelise, that little scene stealer, steals the whole book!

Dirty Dancing at Devil's Leap is funny, endearing, emotional, and oh, so romantic. The final chapter had me sighing, crying, and sighing some more. It's one of my favorite books of 2017 and going straight to my "I'm going to re-read this over and over keeper shelf." 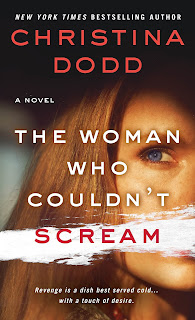 Between vicious meth-cooking fugitives, hostile family members, rampaging egos in the Virtue Falls city council and -- shocker! -- not one but two compelling men competing for her affection, Kateri Kwinault, the newly-elected first female sheriff, has her hands full.Because someone is stalking innocent women and slashing them...to death. With no one to turn to, no one she dares trust, Kateri has to wonder--who is the killer's ultimate target? No one is safe, and if Kateri doesn't find the killer before the night is done, she just might become the town's first dead female sheriff...

As with the earlier Virtue Falls books, this one sucked me in from the first few pages and refused to let go. Dodd has created an ordinary world with sinister undertones, populated it with fully formed characters that seize my interest, and surrounded them with edge-of-your-seat suspense dappled with sass, snark, humor, and emotion. If that isn't enough, she adds paranormal elements that at first glance seem too farfetched to be believable but by the time I've finished the book seem completely normal. And then there are the villains, chilling in their evil, and keeping me guessing their next moves to the very end.

All of it makes me want to book a flight to coastal Washington; walk the rugged shoreline, collecting driftwood and shells while inhaling the fresh scent of the towering pines that dot the hills above, grab a table in the Oceanview Cafe, chat with Rainbow, eavesdrop on the crusty old men lingering over their coffee and pie, hang out with Sheriff Kateri, and drool over her gorgeous ex-con boyfriend, Stag, who may or may not be walking on the right side of the law. But, with all the serial killers, meth dealers, and such, not to mention earthquakes, a tsunami, and the undersea Frog God, maybe traveling there in person isn't that great of an idea. However, traveling to Virtue Falls between the covers of a Christina Dodd novel? Now that is an outstanding idea! 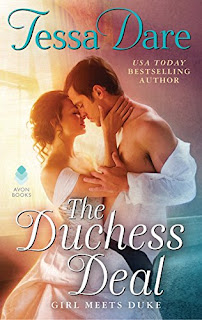 Since his return from war, the Duke of Ashbury’s to-do list has been short and anything but sweet: brooding, glowering, menacing London ne’er-do-wells by night. Now there’s a new item on the list. He needs an heir—which means he needs a wife. When Emma Gladstone, a vicar’s daughter turned seamstress, appears in his library wearing a wedding gown, he decides on the spot that she’ll do.
His terms are simple:
- They will be husband and wife by night only.
- No lights, no kissing.
- No questions about his battle scars.
- Last, and most importantly… Once she’s pregnant with his heir, they need never share a bed again.
But Emma is no pushover. She has a few rules of her own:
- They will have dinner together every evening.
- With conversation.
- And unlimited teasing.
- Last, and most importantly… Once she’s seen the man beneath the scars, he can’t stop her from falling in love…

I love a damaged hero whose life is upended by an intrepid heroine and that's exactly what Dare gives us in The Duchess Deal. Ash and Emma are such fun. She's a surprise at every turn and exactly what our wounded (in body and spirit) hero needs to pull him out of his self-imposed isolation. Their journey is engaging, emotional, and satisfying. Surrounding this unlikely couple are fascinating secondary characters including three young women who, it appears, will all have stories of their own and my personal favorites: the hero's long-suffering butler, Khan (I adored him!) and a cheeky young boy who appoints himself the hero's crime-fighting assistant. I'm hoping we'll have the opportunity to see both of them again in future books.

Pair these vibrant characters with Dare's witty dialog, heartfelt emotion, and sparkling humor (Emma's many possible pet names for her Duke when she can't figure out what to call him, and he's no help, are hilarious. "Twinkles" was a particular favorite of mine) and you have a feel-good story that will make you laugh, sigh, and turn the final page wanting nothing more than to go back to the beginning and start all over again. 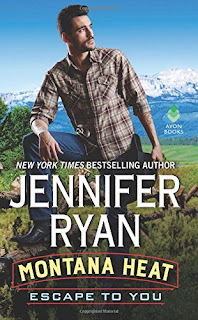 He discovered her during a Montana blizzard, freezing cold, impossibly vulnerable, a little boy by her side. Undercover DEA Agent Beck “Trigger” Cooke is astonished to recognize Ashley Swan—award-winning actress, famous beauty—and missing for over a year. To keep her and the child hidden from a sadistic madman, he secrets the pair away to his isolated home.

No longer a prisoner, and protected at Hope Ranch, Ashley recovers and learns the tall, tempting federal agent may have a dark past, but it hasn’t destroyed his sense of honor.
As they shed past roles and find common ground, Ashley and Trigger can’t help but fall slowly, carefully, in love. But danger still lurks outside the boundaries of Hope Ranch, for until her crazed captor is brought to justice, and Trigger’s undercover past is laid to rest, none of them will ever be truly safe…

If you're looking for a riveting contemporary romantic suspense story that grabs hold and refuses to let go, you need to be reading Jennifer Ryan. I discovered her a couple years ago and now eagerly await every book she publishes.

In Montana Heat:Escape to You, Ryan has created a truly chilling tale that I could not put down. Beck/Trigger has isolated himself on his remote ranch while he recovers from injuries sustained while working undercover and to stay off the radar of the drug lord who wants him dead. He's a protector, one of the good guys, and I was in his corner from the get-go. Ashley and little Adam have spent the past year in a living hell, enduring unspeakable physical and emotional abuse. My heart broke for both of them. Their escape and desperate flight into a freezing Montana night couldn't have led them to a better person to keep them safe. But their captor, and tormentor, is cunningly clever and won't give up until he steals them back.

Ryan excels at creating complex, multi-layered, realistic characters. Beck's years undercover have taken a toll and left him wondering who he really is. His struggle to answer that question is genuine and heartfelt. While Ashley has spent her career in movies, what she's endured for the past year could happen to anyone who trusts the wrong person. The journey she travels is so real with steps forward, and backward, and no easy fixes. Ryan captures it all, the good and the bad, in such detail that the reader can't help but share Ashley's pain, desperation, and first tentative steps toward taking back control of her life.

I lost count of the number of times I gasped, ached, sighed, and, finally, cheered as I read this story. The twists and turns kept me engaged, with edge-of-your-seat suspense, the action pumped my adrenaline, and the emotional intensity of Beck, Ashley, and Adam's journey captured my heart. I can't wait to see what Jennifer Ryan brings us next!

What recent books have hit your 5-star meter?

What upcoming books are you looking forward to reading?

This is my final Birthday Month Giveaway.
Thanks for helping me celebrate!

One randomly chosen person leaving a comment
will receive a print copy of
Montana Heat:Escape to You
and
The Duchess Deal.
(U.S. only)

One randomly chosen person leaving a comment will receive a book of their choice from bookdepository.com
(Open internationally - $10 maximum value)