Review - - The Summer That Made Us

The Summer That Made Us
By Robyn Carr
Publisher: Harlequin / Mira
Release Date: September 5, 2017
Reviewed by Janga 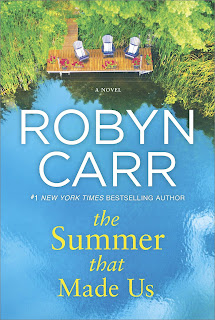 Charley Berkey’s forty-fourth year is proving to be a tough one. After twelve years as the host of a successful talk show, her show is canceled, and her sense of identity takes a blow. Her partner of twenty-two years and the father of her eighteen-year-old son is pushing for them to marry, and Charley is reluctant. Her younger sister, Megan Crane, has Stage 4 breast cancer, and even with a bone marrow transplant, has only a fifty percent chance of survival. When Meg asks to return to the family lake house where they spent the golden summers of their childhood, Charley has reservations, but she cannot refuse her sister’s request.

The lake house in Lake Waseka, Minnesota, belonged to Charley and Meg’s maternal grandparents, Judge and Mrs. Berkey. The Berkey’s daughters, Lou and Jo, spent their summers there, and when the Berkey sisters married Chet and Ray, the Hempstead brothers, and began their own families, they in turn brought their children to the lake house. The sisters each had three daughters. With only a six-year-span separating the youngest from the oldest, Louise’s daughters—Charley, Meg, and Bunny—and Jo’s daughters—Hope, Krista, and Beverly—grew up loving the idyllic summers they shared with one another and with their mothers, who also delighted in their annual period of close sisterhood, with periodic visits from their spouses. Those golden summers ended twenty-seven years ago when twelve-year-old Bunny drowned in the lake. The years since then have been marred with estrangement between sisters and between mothers and daughters. Charley and Meg have remained close, but silence and distance characterize other family relationships.

By returning, Meg hopes to recapture the peace and joy of past summers and to heal their family. With the latter goal in mind, she sends invitations to her cousins, to her aunt, to her grandmother, and, somewhat reluctantly, to her mother. The summer will see them all return with their various brokenness and secrets to remember and to reconnect, to deal with regrets and guilt, to help one another in myriad ways, to say hello and to say goodbye.

Robyn Carr’s latest women’s fiction novel is an emotional story of a family whose dysfunction encompasses four generations. “Women’s fiction” may be generally a somewhat amorphous term, but in this case, it is literal. The Summer That Made Us is a story of women and their relationships to one another and how these relationships define, balance, support, wound, and heal these women. It is the story of how the events of one summer can change an extended family. There are men in this novel—some reprehensible and some admirable—but while their roles are not insignificant, they are clearly secondary. Be warned that reading this book requires a generous supply of hankies. There is irony in the fact that Meg, the cancer patient, is the means of restoring healthy relationships to the wounded.

Romance readers should be aware that the romance in this one is minimal, and some may find the unraveling of so many threads and the optimistic ending unrealistic. I found these concerns negligible. Robyn Carr does in this book what she does best: she gives her readers characters who touch the heart and illumine the human spirit. I give The Summer That Made Us my highest recommendation.
Posted by pjpuppymom at 12:30 AM

Email ThisBlogThis!Share to TwitterShare to FacebookShare to Pinterest
Labels: 5 Star Review, Harlequin, Janga, Mira, Robyn Carr, The Summer That Made Us, Women's Fiction