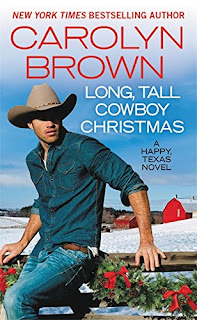 In Happy, Texas, neighbors help neighbors--and if Kasey Dawson’s new neighbor, Nash Lamont, suffers a fall after which he believes she is his wife, well, it is up to her and all the town to play along until Nash gets his memory back. Playing the wife of a handsome, kind cowboy is easier than Kasey wishes to admit. She is a widow, and she still misses her husband, Adam, who died in a military operation two years ago; but she can’t deny she is starting to have feelings that are more than just neighborly.

Nash has moved to his grandmother’s ranch to start a new life--and also bring closure to a chapter in his old one. He suffers from PTSD and at the suggestion of his therapist, he has come to Happy to make reparations with the widow of one of his military team, a man who died for Nash when it should have been him. Worse, all through deployment, Adam shared so many stories of his lovely wife, Kasey, that Nash was half in love with her too. Coming face to face with a woman he has loved in his dreams for the last few years fills him with dread and longing.

Layers of complications abound here: Kasey’s in-laws aren’t too thrilled that she seems ready to move on; her kids, especially her son Rustin, cannot get enough of Nash--and it’s a worry about what will happen when Nash gets his memory back and everything goes back to normal; and Nash, well, he has some secrets of his own. He was the leader of the unit that Adam died in. And Kasey is unaware Nash is connected to her adored husband.

But it’s Christmas time, and these two lonely people will find it is easier to be together than it is to live apart. But it will take 329 pages for that to happen.

Of Carolyn Brown’s books--and I’ve gravitated to her books now because she does write steady cowboy stories--this one has the most emotional complexity and tugged heartstrings of her stories. It’s a lovely sentimental sugarplum of a Christmas story that is bound to make you long for Christmas...and the next Carolyn Brown book.
Posted by pjpuppymom at 6:00 AM