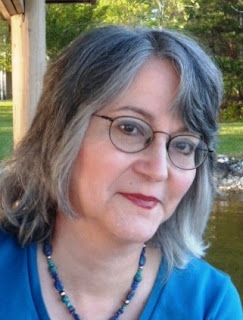 Nancy Northcott joins us today not as a reviewer but wearing her author hat. I've been a fan of Nancy's writing since her debut, Renegade. Today, she's here to tell us about a different direction she's taken with her writing. I've read an early copy of The Deathbrew Affair, the book that launches Nancy's new Lethal Webs series and, I have to say, I'm very excited about this hero/heroine pairing and the adventures to come.

Stop by her website for more information about Nancy, her books, and social media links.

Welcome, Nancy! Congratulations on the upcoming release of The Deathbrew Affair, the first book in your new Lethal Webs series. Please tell our readers what they can expect from this series.

Thanks for having me, PJ.

The series mixes intense action, suspense, and hot romance. Many successful romantic suspense series are built on that combination, but having one couple’s romance evolve over the course of several books, as Casey and Jack’s does, is less common. Some authors are doing that but not many.

I’ve read a lot of mystery series that have the two lead characters’ romance evolving through subplots as the series continues. This is not that. In the Lethal Webs books, the romance is every bit as important as the action-adventure elements. I’m curious to see how people will react to that—and to Casey’s first-person, snarky voice. 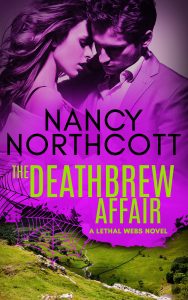 Casey and Jack come from backgrounds as different as night and day, behave much of the time like a dog and cat trapped in the same cage, and have a simmering sexual chemistry that threatens to explode sky-high. I finished this first book confident that, eventually, hopefully, they’ll have a happy ending. What is it about these two that convinced you they had the potential to be a good match?

They both broke out of boxes set for them at birth.  Jack is an earl but always wanted more than the parties and clubs and charity functions that were his family’s world.  He yearned to make a hands-on difference, to take the advantages his birth gave him and do something good with them.  Casey was very young when she vowed to escape the mill town where she grew up, where almost everyone married just out of high school and went to work in the mill, as their parents had before them. The mill owner’s abuse of his power ignited in her a fierce resolve to stop anyone who would misuse power to the detriment of others.

That refusal to conform is something they recognize in each other, though not consciously at first. At the root of things, they share an ardent desire to see the bad guys brought down, to see justice done. And each of them secretly admires, just a little bit, the qualities in the other that they find annoying.

This first book is set in the UK. Will the others be set there as well or will Casey and Jack be globe-trotting in future adventures?

There’s a little globe-trotting.  The novels are mostly set in the UK, with occasional scenes set in other countries.  For example, the second book opens with Casey on a raid in France. Then the action moves to England and stays there. A couple of the novellas, though, will have a more international focus, and the last book will be mostly set in Casey’s (and my) native North Carolina.

The Deathbrew Affair has a 007 vibe, if Bond had a female American agent partner. Are you a fan of the franchise? Who is your favorite James Bond?

I love the Bond movies, as it happens, and I always enjoy the opening action sequences.  My favorite Bond is Pierce Brosnan.  Each of the others has his strengths and does a good job, but I really liked Brosnan.  In second place would be Timothy Dalton.

As I read this book, I kept visualizing it playing out on the big screen. If given the opportunity, who would you cast in the roles of Casey and Jack?

Why, thank you! I would cast Missy Peregrym of Rookie Blue as Casey and Richard Armitage (in his MI-5 look, not his Thorin Oakenshield one) as Jack.

The Deathbrew Affair is packed with non-stop action and suspense (which I loved!). To what authors do you turn when you want a rollercoaster read? 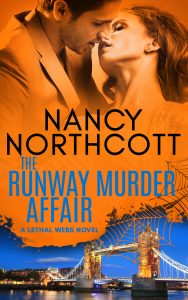 What is the timetable for future Lethal Webs books?

That’s not firmly set yet, as I’m juggling several series.  The next book, The Runway Murder Affair, should be out this year, with the third book, The Deadly Cargo Affair, coming early next year.  After that comes the first novella, The Christmas Village Affair.  Since that will definitely miss Christmas, I’m hoping to have it out by Valentine’s Day, but we’ll see.

Favorite place to read?
It’s a toss-up between the couch in my study or in bed.

Nemesis, the next Light Mage Wars book, is about half done and begging to be finished. I’m also working on Christmas on Outcast Station, a collaboration with Jeanne Adams. Then will be The Runway Murder Affair.

Sounds like a lot of good reads on the horizon. Thanks for visiting with us today, Nancy. Is there anything you’d like to add?

Thank you for having me, PJ.  The only thing I want to add is that I’m having a blast writing these books, and I hope readers will enjoy them, too.

Sure.  Who’s your favorite spy in books or movies? Have ever read other action-adventure series that place equal emphasis on the romance?

One randomly chosen person who leaves a comment before 11:00 PM, September 29 will receive a signed copy of The Deathbrew Affair.

THE DEATHBREW AFFAIR: LETHAL WEBS # 1
September 30, 2017
HE’S THE KING OF CONTROL FREAKS.
I’M THE QUEEN OF WINGING IT.
TOGETHER WE’LL SAVE THE WORLD...
UNLESS WE KILL EACH OTHER FIRST.

I’m Casey Billings, an American operative in the London office of a covert, multinational agency. I’m working with an MI5 officer, Jack, Lord Bainbridge, to bring down a bioterrorist who plans to unleash a pandemic. We’re posing as newlyweds to infiltrate the community that’s a cover for the bioweapons operation. Unfortunately, we don’t play well together, and not only because of Jack’s distracting, off-the- scales hotness.
I grew up poor in a mill town, and he’s an aristocrat with more money than a third-world country. Besides that, I fly by the seat of my pants while Jack lives by his plans for every contingency and takes charge of everything. Including me. Or so he thinks.
Basically, we’d like to strangle each other. But we have a pandemic to stop first.
Then all bets are off.

You can read the first chapter here: