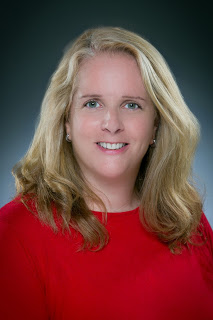 I'm delighted to welcome Anna Bradley back to The Romance Dish today. I've been a fan of her writing since reading her debut novel, A Wicked Way to Win an Earl two years ago and intrigued by Lady Eleanor Sutherland since she walked onto the page in that first book. Eleanor's book, Lady Eleanor's Seventh Suitor, is another outstanding addition to Bradley's Sutherlands series and well worth the wait. I loved it! Anna joins us today to tell us a bit about Lady Eleanor's story as well as the next book in the series which (yay!) releases next week.

Originally from Maine, Anna now lives in the Pacific Northwest with her husband and children. She holds a degree in English Literature, once worked at the Chawton House Library, a rare books library that specializes in writings by British women from the 1600s through the Regency, and now teaches writing in addition to penning her own books. Learn more about Anna and her books at her website.


Welcome back, Anna! Congratulations on the recent release of your third Sutherland novel, Lady Eleanor’s Seventh Suitor. I’ve been a Lady Eleanor fan since first meeting her in your debut. Please tell our readers what they can expect from her story.

Thank you so much for having me back, P.J! I’ve been so excited for Eleanor’s story to come out, because she’s such a smart, spirited heroine, and that’s my favorite kind. Eleanor hides a soft spot under all her cleverness, though. The ton believes she’s cold and haughty because she’s rejected so many suitors, but all Eleanor really wants is to find true love. She doesn’t want to marry for anything less than that, but before she gets her HEA she’s got quite a battle on her hands with Cam, who’s determined to marry her for his own reasons, and his reasons have nothing to do with love! There’s a lot going on in this story—secrets, lies, blackmail, and revenge—but in the end, love wins! 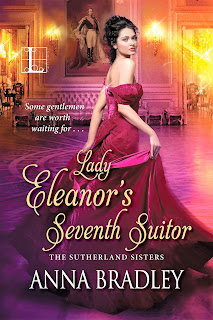 Cam begins his journey with Eleanor as more villain than hero, throwing a whole lot of obstacles onto their path to happiness. What do you want readers to understand about him?

Cam is the hero who’s doing all the wrong things for what he truly believes are all the right reasons, so I really see him as part villain, part hero. I think what readers need to understand about Cam is that in the end, it’s his deep love for Ellie that shows him the errors of his ways. He becomes a hero because of her.
Even when we disapprove of Cam’s actions (and as readers we’re angry with him at times), we can still on some level relate to his reasons for them. Maybe Eleanor says it best when she says of him: “Devotion such as his, a love as deep as his, is rare.” Everything Cam does in the book is motivated by love.
There are a lot of different kinds of love in this book—romantic love, parental love, familial love between brothers and sisters, but I think Cam’s love for his sister Amelia shows us that love is an intense, complicated emotion that sometimes makes us do crazy things but also saves us in the end.

I do have sisters—two of them, Jen (who is 3½ years younger than I am) and Liz (who’s 13 months older). The three of us are really close, and this book definitely includes the “sister perspective,” because I did draw from my own experience with my sisters when I wrote it. I didn’t realize how much I’d done so until after the book was finished, but the depth and complexity of the sister relationship is reflected in Charlotte and Eleanor’s part of the story. They don’t always agree with each other, and they’re not really that much alike, but there’s this fierce love, loyalty and protectiveness between them, even so. One of my favorite quotes from the book is when Ellie says: “She might not understand Charlotte’s recklessness. She might not approve of Charlotte’s behavior…but there’d never been any question she’d defend her, with teeth bared and fingernails curled into claws, if necessary.” That, to me, is the sister connection, i.e. I may not always “get” you, but I’ve got your back! 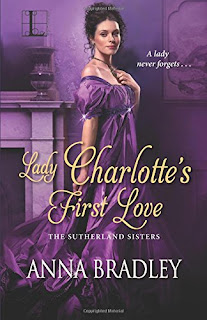 I’m already invested in Charlotte and Julian West. I understand their book will be next. What can you tell us about it?

Julian and Charlotte don’t get their HEA at the end of Lady Eleanor’s Seventh Suitor, and I know some readers were surprised by that. One reader emailed me to tell me how mean I was to leave them at loose ends! But the love between Julian and Charlotte is incredibly deep, and they really needed their own story. I’d call Lady Charlotte’s First Love (to be published in October) a “second-chance at love” story, but it’s a complicated one because their history together is painful, and they’re both also dealing with difficult events from their recent pasts. It’s a passionate story, and a heart-wrenching one, but their HEA really delivers on the feels. Keep a Kleenex handy when you read it!

Fall is upon us, and I’m in my element. I love the crisp mornings, cool nights, fall fruits and veggies, and, of course, college football. Which season is your favorite? What makes it so?

I’m a fall girl too, P.J. I was born and raised in Maine, and people from Maine are taught at an early age to love fall. I think it’s actually a state law! I love the crisp, cool weather, the fall colors, and even the rain. I live on the west coast now, near Portland, OR, and I love it here, but when the end of September rolls around, I always miss the east coast.

Earl Gray tea. I’m so boring, but every once in a while I go crazy and get an Earl Grey latte instead!

It has to be tomato soup and grilled cheese sandwiches. Thankfully, my kids love it, too!

Definitely beach, which makes things interesting, because I’m married to a “mountain” guy, so we have to split the difference. 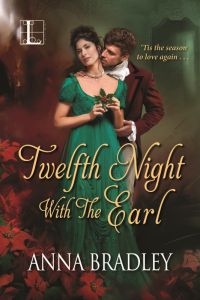 A Christmas novella! It’s my first one, and I’m super excited about it. It’s called Twelfth Night with the Earl and it features Lord Devon, a character from Lady Charlotte’s First Love as the hero. Then in 2018 the three Somerset sisters’ books are coming out.

Thanks for visiting with us today, Anna. Would you like to ask our readers a question?

Yes! Those of you who have sisters, I’d love to hear what you love to do together, and does that include talking about your favorite books?

There have been six suitors so far, all vying for the attention—and generous dowry—of the beautiful, elusive Eleanor Sutherland. What does this woman really want? Who has what it takes to melt the heart of the so-called Lady Ice? These are the questions Camden West keeps asking himself. But rather than wait for answers, Cam takes matters into his own hands . . . for he has a secret weapon.  Cam knows that Ellie’s sister, Charlotte, harbors a scandalous secret—one that could bring ruin to the Sutherland name. If Ellie marries him, Cam promises to keep mum. But is she willing to sacrifice her own happiness for her sister’s reputation?  To Ellie’s surprise, it becomes clear that Cam doesn’t need her money, nor is he interested in her status. Soon, what begins as a sham engagement transforms into something deeper, and more passionate, than Ellie could have imagined. Is it possible that all Cam truly wanted was her? And is that reason enough to say yes—or is handsome Cam hiding something else? Even for a lady in love, only the truth will do . . .

Since her husband’s tragic death, Lady Charlotte Hadley has embarked on a path of careless behavior and dangerous hijinks from which no one can divert her . . . until suddenly, her first—and only—true love reenters her world. Their fiery romance was so scandalous Charlotte had no choice but to marry another, more suitable man. Surely now they are both free to pick up where they left off . . .Julian West has returned to London a hero after making a name for himself in battle at Waterloo. Every woman is vying for his attention—except the one who stole his heart. No matter, Julian has other obligations. But when Charlotte’s sister, Eleanor, charges him with protecting the widow from ruin, what ensues is another kind of battle—one that leads a chase from London’s bars and brothels to the finest country estate as Julian and Charlotte untangle a host of secrets, regrets, and misunderstandings. For could it be that the love they’ve forced themselves to forget is exactly what they need to remember? . . .