Review - - A Good Duke is Hard to Find 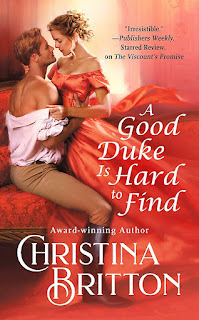 After her third fiancé leaves her at the altar, Lenora Hartley is beginning to think she's cursed. One thing's for certain: she needs to escape London and her father's tyrannical attempts to find her yet another suitor. The Isle of Synne, an isolated and idyllic retreat off Britain's northern coast, is blessedly far from society's gossip, but it also carries haunting reminders of her first fiancé. Letting go of the past to find happiness seems impossible -- until Lenora is thrown in the path of a gruff, mysterious blue-eyed man who makes her pulse race.Next in line for a dukedom he doesn't want to inherit, Peter Ashford is only on the isle to exact revenge on the man who is responsible for his mother's death. Once he's completed the task, he'll return to America where his life can finally be his own. Yet when he meets the beautiful and kind Miss Hartley, he can't help but be drawn to her. Can Peter put aside his plans for vengeance for the woman who has come to mean everything to him?

This was my first book by Christina Britton. It won't be my last. I really enjoyed her voice, her characters, her fresh and original story, and her fictional Isle of Synne. I want to go there, hang out with Lady Tesh, buy one of Lenora's paintings, meet the rest of Britton's fascinating cast, and drop Lenora's father off a very high cliff into very deep water. That man deserves every bad thing that could ever happen to him.

I found both main characters to be sympathetic and likable though, admittedly, it took me longer to warm up to Peter while I was in Lenora's corner immediately, cheering her on to a happy ending and hoping she'd find a way to thoroughly rout her horrible father. I liked her, admired her, and my heart ached for her anguish over the secrets she felt compelled to keep. Peter is a very angry man, holding on to the devastation and despair of losing his mother at a young age and his fury with those who refused to help her. Forgiveness will not be easy but I found that to be more realistic considering his age when the events that shaped his life occurred and the thirteen years he's had to nurture his grudge. Britton gives us glimpses of his potential through his deep love for his late mother, his close friendship with his best friend, Quincy, and his actions toward Lady Tesh and Lenora.

The romance between Lenora and Peter is a slow burn as both characters have personal issues to resolve before they can move forward together. I was willing to wait for the payoff though readers should be aware that these issues lend themselves to a slower paced story and more than a little frustration with the hero before he finally sees the light. Not to worry. He gets his happy ending but Lenora, rightfully, makes him work for it (I really do love her character). That, of course, makes it all the sweeter.

Book two in this series, Someday My Duke Will Come (12 January, 2021), features a fake engagement between Peter's cousin, Lady Clara and his best friend, Quincy Nesbitt. Both characters feature prominently in A Good Duke is Hard to Find and the glimmer of sparks between them has me eagerly anticipating their story.