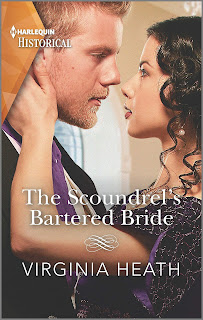 Marriage…
To the highest bidder
Lady Lydia Barton cannot seem to avoid Owen Wolfe since he’s returned after being wrongly transported for stealing her family’s jewels! But Lydia has more pressing problems, like her impending arranged marriage. Until Owen makes her father a counteroffer for her hand. Is Owen purely after her society connections, or dare Lydia hope that the charming stable boy she once loved is still within her ruthless, wealthy new husband?

I love a good enemies to lovers story. When the enemies were once young lovers, then separated with each believing they'd been betrayed by the other, and brought back together years later for a second chance? Well, that's even better!

One of the things I most enjoy about Virginia Heath's writing is her ability to develop characters. Once again, she fills this book with well-rounded characters who leap from the pages and elicit emotion, both good and bad. I warmed to Owen quickly, probably because it's immediately apparent that he was the wronged party in the events of the past but also because he's just a really good guy. Lydia was another story. But that's okay. It gave her good opportunity for growth as Heath slowly guided these two in their journey of discovery and, by the end, I was firmly in her corner.

I liked that Heath gave Owen and Lydia time to gradually come to know one another as adults, while rediscovering the qualities they had admired when younger, and opening their eyes to what could be in the future...if they're willing to face the truth, and risk their hearts. I grew impatient with Lydia several times but as the truth of her family, and her life, was unveiled I began to understand her actions better - she was dealt one horrific hand when it comes to families - and I cheered at the way she dispensed justice in the end.

I adored Owen's business partner and his family. What a wonderful group of secondary characters who bring comic relief and offer pivotal advice to both Owen and Lydia. I can't imagine this book without them.

Once again, Virginia Heath has written a character-driven, historical romance with plenty of conflict, humor, heart, and a sigh-worthy happy ending, that kept me eagerly turning pages from start to finish.