I really enjoyed the first book in Valerie Bowman's new The Footmen's Club, historical romance trilogy and am eagerly looking forward to book two. Duke Looks Like a Groomsman is a second chance, enemies to lovers story with the added fun of forced proximity and a duke hero disguised as a groomsman. I can't wait to dive into this one.
Duke Looks Like a Groomsman
by Valerie Bowman
The Footmen's Club - Book 2
Publisher: June Third Enterprises
Release Date: July 28, 2020 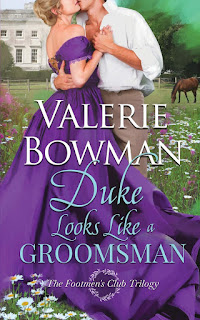 He's posing as a groomsman.Rhys Sheffield, the Duke of Worthington, has bet his friends an ungodly sum of money that despite his loftiness, he can pass himself off as a servant at the house party of the Season. But when his clever ex-flame arrives and recognizes Rhys in the stables pretending to be a groomsman, she realizes it’s the perfect opportunity to pay him back for breaking off their engagement.She’s the bride-to-be.The lovely Lady Julianna Montgomery may be the only young woman at the house party who’s not in the market for a husband. She’s quite happily engaged to a marquess, thank you very much, and scarcely remembers the pain of being callously tossed over by the Duke of Worthington nearly two long years ago—till now.All bets are off.Rhys seems to be everywhere, flexing his muscles, laboring in the sun—and Julianna has never found him more appealing. With his signature charm, he persuades her to keep his secret. But when she learns he’s determined to win a bet of honor, she can’t resist playing a game of her own. She’ll spend the next fortnight tempting Rhys at every turn and making him lose his precious wager. Even if it means she must lose her heart in the process…
Doesn't that sound delicious? In the meantime, while we're waiting for Duke Looks Like a Groomsman to be released next week, let's take a look back at book one with an excerpt from The Footman and I.
The Footman and I
by Valerie Bowman
The Footmen's Club - Book 1
Publisher: Valerie Bowman Books
Release Date: May 23, 2020
Read PJ's Review 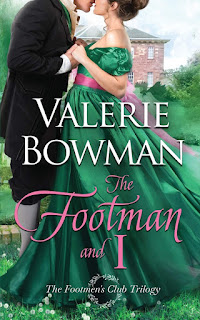