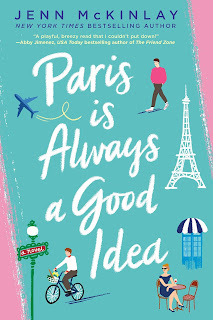 It's been seven years since Chelsea Martin embarked on her yearlong postcollege European adventure. Since then, she's lost her mother to cancer and watched her sister marry twice, while Chelsea's thrown herself into work, becoming one of the most talented fundraisers for the American Cancer Coalition, and with the exception of one annoyingly competent coworker, Jason Knightley, her status as most successful moneymaker is unquestioned.When her introverted mathematician father announces he's getting remarried, Chelsea is forced to acknowledge that her life stopped after her mother died and that the last time she can remember being happy, in love, or enjoying her life was on her year abroad. Inspired to retrace her steps—to find Colin in Ireland, Jean Claude in France, and Marcelino in Italy—Chelsea hopes that one of these three men who stole her heart so many years ago can help her find it again. From the start of her journey nothing goes as planned, but as Chelsea reconnects with her old self, she also finds love in the very last place she expected.

This book is an absolute delight that had me flipping pages from start to finish. It's not really a coming of age story, Chelsea is almost 30 years old, though it does share a lot of the same qualities. It's really more of a re-awakening, a chance to recapture the joie de vivre (zest for life) that characterized Chelsea's life and filled her heart seven years earlier, before her year abroad was cut short with the devastating news that her mother was dying. She's convinced herself that if she revisits the three European cities where she was most happy, and the men she loved while she was there, that all will be well again. You know what they say about best laid plans...

McKinlay guides Chelsea through her journey with a deft hand, utilizing humor, emotional awakening, and a rich secondary cast to help her along the way. Romance does find its way back into her life but it arrives from the most unexpected direction, one I would not have predicted early on but with which I was fully onboard by the end. I loved how Chelsea evolved throughout the course of the book (she's not very likeable at the beginning), and her relationships, both romantic and familial, along with her. Her emotional life has basically been stagnant for seven years and that shows in her actions. I appreciated that the author took the time to gradually, and realistically, awaken her to those facts.

Not only did the author create characters who leap from the pages of this book but she did the same with the settings as well. From bucolic Irish sheep farms to the charming flats and glittering lights of Paris then, finally, the historic charm of a Tuscan vineyard, she brought them all to life and immersed me in each of the locations. If it weren't for this darn virus, I'd be booking flights right now.

If you're looking for a contemporary rom-com with humor, heart, and plenty of witty banter, plus the bonus of a virtual European tour (I swear I could actually smell the French pastries), I recommend adding Paris is Always a Good Idea to your summer reading list.