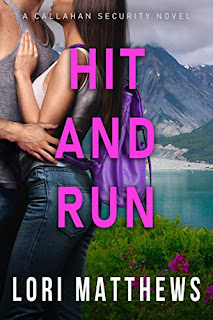 Dani Pierce is a master of the dark web - but now trouble has arrived at her front door.

And despite the fact the aggravating, yet handsome man hired to protect her makes it clear he’s just there to do a job... it doesn’t stop her from appreciating how ruggedly sexy he is.

Gage Callahan knew his latest assignment for Callahan Security would be a disaster.

He scoured all of Europe trying to locate the computer programmer he was hired to protect only to discover she’s actually a hacker hiding in Alaska.

It will take all his ingenuity to focus on the primary objective of getting her and the prototype software safely to New York…especially with a growing fatal attraction he’s developed for the spunky woman.

Lori Matthews brings readers another fast-paced, suspense-filled, and action-packed novel in this third installment of her Callahan Security, romantic suspense series. From the initial pages of the book, I knew I was in for another wild ride. The stakes were high, keeping me on the edge of my seat as Dani and Gage did their best to outwit and outrun the bad guys who seemed to be outmaneuvering them at every turn. Obviously, there was a mastermind with more information than was good for Dani and Gage's peace of mind...or health.

Matthews created a tightly-woven story with intertwining threads of mystery that kept me flipping pages, and trying to guess how it would all play out in the end. I figured out the mastermind's identity early on but even after that was confirmed, there were still plenty of threads to be tied, and questions to be answered right up to the dramatic life and death conclusion.

Dani and Gage were both interesting characters with backgrounds and baggage that influenced their attitudes - and actions - after they teamed up. I found them both intriguing, especially Dani, and enjoyed their verbal sparring. What I wanted more of was romantic chemistry between them, something that was palpable between the couples in the first two books. While that lessened my enjoyment of their romantic relationship a bit, the rest of the book was spot on.

A highlight of the book for me was the group of intrepid seniors Dani encountered on the cruise ship. These ladies, especially Dottie, practically leaped from the pages of this book and came to the rescue in more ways than one. I loved them!

Hit and Run is written to be enjoyed on its own and can certainly be done so. However, I think reading the books in order will give readers a better understanding of the dynamic among the Callahan brothers as well as the mystery thread that runs through the three books. I've enjoyed getting to know the Callahan family and can't wait to find out what Matthews has in store for readers next.