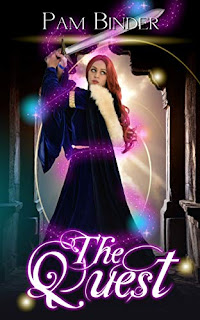 Medieval Highland apprentice witch Ana de Dannon is desperate to free her imprisoned mother and needs a champion. Her evil stepbrother has offered her mother's freedom in exchange for his defeat at the tournament. Knowing it's a trap, she still summons a legendary warrior. But instead of Cuchulainn, a famous 21st century quarterback appears.Kenneth MacKinnon (Mac) is stunned he has traveled to 14th century Scotland but agrees to help Ana free her mother if she will return him to the future. Fighting their mutual attraction, Ana trains Mac for the competition. He is a fast learner, with a kind heart buried under his arrogance, but he has much to learn. Ana fears their chances of escaping with her mother—and their lives—diminish by the day.
PJ's Thoughts:
I enjoyed Binder's realistic depiction of 14th century Scotland, the heart-tugging romance between Mac and Ana, the action and danger, and the touch of otherworldly magic. Ana and Mac were both likable, relatable characters in whose happiness I quickly became invested. Their romance is a slow burn and I liked that the author gave Mac plenty of time to adjust to the reality of his situation before advancing their relationship. All of the characters, including the supporting cast, were fully formed, true to their time and position in society, and moved the plot forward. The touch of magic was well placed, keeping me guessing as to where the author would take that particular thread and the ultimate impact it would have on the overall story.
Without getting into spoiler territory, there were a few issues relating to Mac where I wanted closure and didn't get it. It didn't ruin the HEA for me (I was happy with Mac and Ana's relationship and where they ended up) but it did put an asterisk on it for me. Since this is time travel where you pretty much have to check your disbelief at the door, there's a good chance most readers wouldn't even notice my quibbles.
I was intrigued by Ana's parents and would love to know more about her father and mother, their past, and what happens to them following the end of The Quest. I don't know if Binder plans to write that story but if she does, I'll definitely be reading it.
If you enjoy slow burn, fish-out-of-water, time travel romance with action, a bit of humor, and plenty of heart, give this one a try.
Posted by pjpuppymom at 12:30 AM