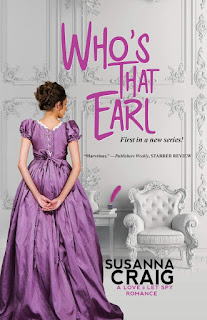 Miss Jane Quayle excels at invention. How else could the sheltered daughter of an English gentleman create lurid gothic novels so infamous someone wants their author silenced forever?  Fortunately, Jane has taken steps to protect herself, first by assuming a pen name, and second, by taking up residence at remote Dunnock Castle, surrounded by rugged scenery that might have been ripped from the pages of one of her books. Her true identity remains a secret, until one dark and stormy night . . . After years of spying for the British army, Thomas Sutherland doubts the Highlands will ever feel like home again. Nevertheless, thanks to a quirk of Scottish inheritance law, he’s now the Earl of Magnus, complete with a crumbling castle currently inhabited by a notorious novelist. When the writer turns out to be the woman Thomas once wooed, suspicions rise even as mutual sparks reignite. As danger closes in, can Jane and Thomas overcome their pasts to forge a future together?
PJ's Thoughts:
In her 2016 debut, To Kiss a Thief, Susanna Craig captured me with her richly drawn characters, vividly portrayed settings, and captivating storytelling skill. Each subsequent book over the past four years has only solidified her position on my author auto-buy list.
With Who's That Earl, Craig once again takes readers out of London with a lively story that's sure to entertain. Set in rural Scotland, with characters that leap from the page, she immersed me Dunnock Castle, the small village that surrounds it, and the lives, and loves, of the people who live therein. The story moves at a speedy clip, with witty banter, a delicious push and pull between hero and heroine, and a dangerous mystery to be solved. Craig has a knack for bringing it all to life, making me feel as if I know these characters, am invested in their lives, and have a stake in their happiness. I was right there with Thomas and Jane, cheering them on the entire way, and finishing their story with a happy smile and sigh.
Who's That Earl launches Susanna Craig's new Love and Let Spy series where military spies meet the women destined to capture their hearts with the assistance of a most unlikely matchmaker. I adored Jane and Thomas's story and am already looking forward to the next match!
~~~~~~~~~~
Q&A with Susanna Craig
Welcome back, Susanna!

Your newest novel, Who’s That Earl, releases today and has also been named an Amazon Best Romance of the Month. Congratulations!

Thanks so much! It’s really an unexpected honor.

Who’s That Earl launches your new Love and Let Spy series. What should readers expect from this new series and from the first book?

My inspirations for this series were my favorite romantic suspense TV series from the 1980s, such as Magnum PI and Remington Steele. You certainly don’t have to know or love those shows, but readers who remember them should be on the lookout for a few winks and nods! TV shows aside, I had a lot of fun both researching and imagining Regency-era spies and secrets, so that each book is full of intrigue, adventure, and, of course, romance. In Who’s That Earl, a Scottish spy unexpectedly inherits a castle in the Highlands and discovers that the reclusive Gothic novelist who’s been living there is a woman from his past he can’t forget.

Who's That Earl has a definite Remington Steele vibe. (I adored that show!)

You have an intriguing gender-flipped “fairy godmother” pulling the strings to nudge our hero in the direction of his true love and an unexpected new life path. What inspired you to create this unorthodox matchmaker?

I thought it would be a lot of fun to have a man in that role for a change, a commanding officer who has the best interests (and love interests) of his soldier-spies at heart. For General Scott, I went back to the 1970s for my inspiration: Charlie of Charlie’s Angels, who calls all the shots from behind the scenes, with a dash of Col. Potter from M*A*S*H mixed in for humor. The character got his first mention in The Duke’s Suspicion, but I didn’t know then that he made a habit of matchmaking!

This is the second time you’ve created a novelist heroine. How easy – or difficult – is it to write a character who shares your own occupation?

I’ll be honest: it’s a little nerve-wracking, because I’m sure I’m revealing some things about my own fears and foibles as a writer, such as my messy writing process (I’m a “pantser,” meaning I don’t usually know where a story is going when I start out, just like Jane in Who’s That Earl). My own feelings are also very much behind what Jane and Cami (in The Companion’s Secret) say about the power of books and the value of reading. I also enjoy getting to try out other author “voices” when I write little snippets from my heroines’ books!

I love that much of this book is set in a small village in Scotland. Will the remaining books in this series also be in Scotland or do we have other settings to look forward to?

The settings are going to be unique to each story. The second book in the series takes place in and around London, and I’m planning for the third to take place at the seaside (only partly because I’m dreaming of a beach vacation!)

In Who’s That Earl, the scent of night-blooming jasmine evokes memories of seven years earlier and a certain English lass from Sussex that your hero, Thomas has never forgotten. Are there any scents that evoke a particular memory for you? What is the scent and where does it take you?

You always have the best questions, PJ! This is probably a little unorthodox, but I grew up on a dairy farm in Michigan, so the smell of milk (fresh, sour, warm, cold) takes me back to very specific moments from my childhood and makes me think of my dad.

Not so unorthodox, Susanna. My grandparents were Michigan farmers and I was with them often in my early years. I spent a lot of time in the barn with my grandpa and share your sensory memories.

Since I’ve been unable to travel this year, I’ve spent more time at home getting lost in new stories, like yours. What books are on your must-read list this summer?

I’m also an English professor, and this summer I’ve been planning a course in popular romance fiction, so I’ve gotten to revisit a few classic favorites, like Loretta Chase’s Lord of Scoundrels, as well as some great newer titles like Alyssa Cole’s A Princess in Theory and Sonali Dev’s Pride, Prejudice, and Other Flavors. Christina Britton’s A Good Duke is Hard to Find and Vanessa Riley’s A Duke, the Lady, and a Baby are at the top of my new-release TBR.

Where can readers interact with you online?

Are you able to tell us anything about what’s coming next?

The next book in the Love and Let Spy series, One Thing Leads to a Lover, is my homage to Scarecrow and Mrs. King, featuring a respectable widowed countess who gets mixed up in espionage. I had so much fun writing it, and really I hope readers will enjoy it! It will be out in April 2021. Right now, I’m working on book three, which is my gender-bent mashup of Remington Steele and Moonlighting, tentatively called Better Off Wed.

I love these titles!

Thanks so much for visiting with us today, Susanna. Would you like to add anything else or ask my readers a question?

Thanks so much for having me, PJ! I would love to know, if your readers could spend a day in the world of their favorite story (TV, movie, or book), what would it be and why?

I’ll send an autographed print copy of one of my backlist books, reader’s choice, to a random commenter. Deadline to enter is 11:00 PM, August 19.

(US shipping only; learn more about my books at www.susannacraig.com/books).